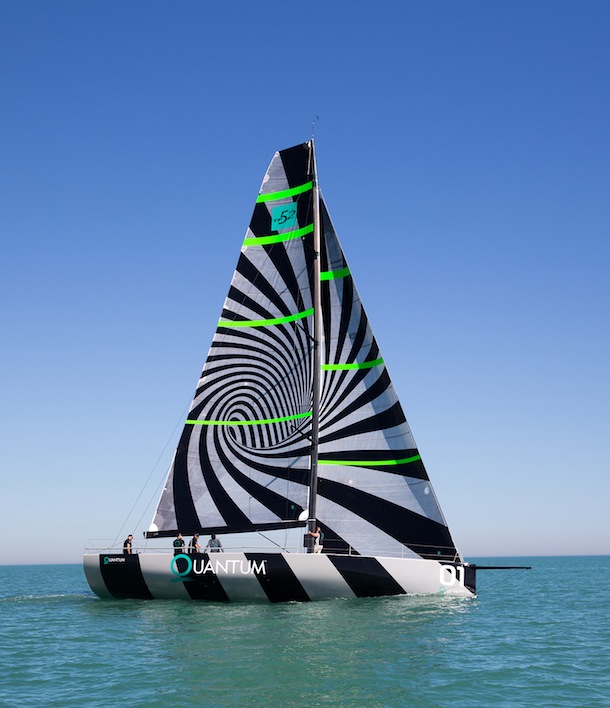 With a stunning and eye-catching livery, the new TP52 Quantum Racing (USA) was recently launched in Spain and is now undergoing sea trials before the start of an intense racing season.

The new Botin design Quantum Racing, owned by Doug DeVos, was built by Longitude Cero in Burriana, Spain, under the close supervision of build manager Jared “Beach” Henderson from New Zealand who joined the team this year, with mid-bow duties when sailing. This is the third Quantum Racing 52 to be built at this facility. Quantum Racing will train out of Palma de Mallorca with the goal of making a racing debut at Gaastra PalmaVela from April 29th to May 3rd, alongside many of the other new TP52s that will be competing in the 52 Super Series.

This year’s season for Quantum Racing is charged with great anticipation. Doug DeVos and his son Dalton will be playing a more active part in the programme, sharing the role of helmsmen together with America’s Cup and match race veteran Ed Baird. Doug and Dalton plan to steer the boat at four of the six events of the 52 Super Series, which will kick off with Valencia Sailing Week on May 19th.

“We cannot wait to see our new Quantum Racing on the start line in Valencia, alongside eight other new-generation, freshly built TP52s and four existing boats,” commented Doug DeVos. “It will be a fully-charged season with six events in great locations, and the key to success will be consistency. It is wonderful to share my passion for sailing with my son Dalton and the rest of the team, whom I consider as part of my extended family. Competitive sailing at this level requires commitment, determination, goal setting and the desire to grow and improve, with common core values.”

The role of tactician will be shared by Terry Hutchinson from the USA and Adrian Stead from the UK, the latter returning to the team after a three-year hiatus. Juan Vila from Spain is back as navigator. Tom Burnham (pit) and Greg Gendell (bow) from the USA, and Brett Jones (trim) from Australia have sailed with the team since the very early days in 2008. Their knowledge of the group’s dynamics and the close ties with the other members who have been part of Quantum Racing since the start – Ed Reynolds, Libby Tomlinson, Keith Brash, Mark Koetje, Jeremy Smith, Martin Winter – are an invaluable asset. For the 2015 season, three new members will join Quantum Racing: Jared Henderson in the sailing team, Tim Hardy (Australia) and Simon McLean (New Zealand) as shore crew.

For Ed Reynolds, President of Quantum Sail Design Group and Quantum Racing Managing Director, trust and a long-term vision are fundamentals when building and growing a successful brand: “What you see on the water on a circuit like the 52 Super Series is the result of meticulous labor, planning and training, to which every member of the team contributes with its own expertise and personality, and a lot of this happens behind the scenes. Quantum Racing builds its strength on a highly experienced core group, and new talent which is brought in each year.”

Another unique element to Quantum Racing is the strong relation between competitions, and product development and sail design technology. Better than a wind tunnel, Quantum Racing is the ultimate test platform for Quantum’s Fusion M™ sails and iQ Technology® – the company's proprietary sail design and manufacturing process. With over 200 hours of sailing each season in a full range of wind and sea conditions, the Quantum Racing program provides the most controlled way to gather data, verify performance targets and identify areas for improvement. The 52 Super Series also provides a great opportunity to share knowledge: other TP52 teams using Quantum® sails have full access to the company's sail design team, on-the-water test results and optimization procedures.

Quantum Racing’s continuing partnership with Bravo Systems and Vspars is a key component of this process. The other returning partnering companies, all leaders in their respective fields, contribute to the team’s success, well-being and commitment to sustainability. These include technical gear manufacturer Gaastra Pro, Amway specializing in consumer products and business opportunities, and the 11th Hour Racing, a program of the Schmidt Family Foundation seeking to mobilize the sailing and marine industry to create systemic change for the improved health of our oceans.