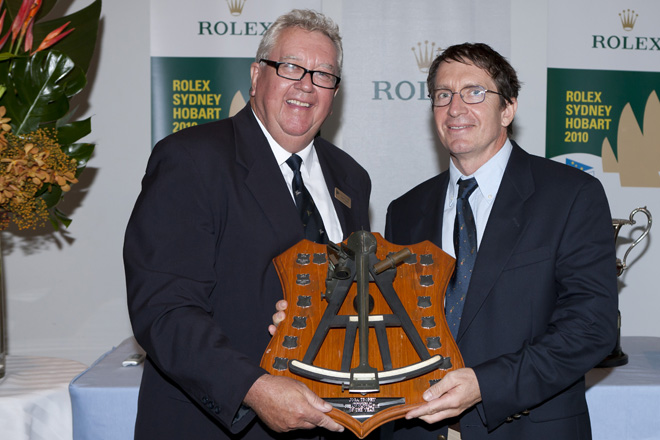 Renowned navigator and marine biologist, Will Oxley, is to attend opening night at 2018 SeaLink Magnetic Island Race Week to impart his weather knowledge – and it is anticipated the Townsville sailor will recount a story or two on his vast experience as a yachtsman.

Oxley has clocked up more than 250,000 sea miles to-date, inclusive of five Whitbread/Volvo Round the World races and 17 Sydney Hobarts, in which he navigated Matt Allen’s Ichi Ban to overall honours last December.

The unassuming and highly respected sailor also skippered 'Compaq' in the BT Global Challenge 2000/01 and filled the role of weather coordinator for the Swedish ‘Victory’ Challenge for the America’s Cup. Oxley also provided navigation and weather services for Puma in the 2008/09 Volvo Ocean Race and others.

During his Sydney Hobarts on various yachts, Oxley has ‘kitted out’ various boats’ navigation stations with the latest in equipment, leaving a legacy, which is always greatly appreciated by incoming navigators. It is also acknowledged by media personnel who have been able to receive up-to-the-minute information from Oxley and his successors during long ocean races.

Townsville Yacht Club (TYC) director and Event Chairman, Mike Steel said, “Due to sailing commitments, Will isn’t generally in town at this time of year. But when he is home, he’s been very happy to oblige us and competitors really value his knowledge and insights.”

Oxley will have a full audience, with a good spread of entries across IRC Racing, SeaLink Spinnaker, Non-Spinnaker and Multihull classes.

The Beneteau First 40, representing Royal Queensland Yacht Squadron, is currently at Airlie Beach Race Week where is her crew is going through drilling practice in Cruising Division 2. Irvine will step it up when he and the crew arrive to take on some highly-rated competition.

“I’ve not sailed there before, but I go to Townsville quite a bit and like the place. Maggie was always something I wanted to do – it was on my wish list. People talk about it and lot say it’s fun and relaxed and that suits me.”

Charm Offensive, the Hanse 445 owned by James Permezel, is one of 48 starters in Cruising with Spinnaker division. The Victorian says, “A dream family boat enjoying cruising northern Queensland and doing races with mates and family.”

One of those mates is likely to be fellow Victorian, Bruce Taylor, a 37 Sydney Hobarts veteran who competed with Permezel at Maggie Island last year. Taylor recently won the Noakes Sydney Gold Coast Yacht Race and Permezel, one of Taylor’s regular crew on Chutzpah, was aboard. The Chutzpahs are a tightknit bunch, most have sailed 25 plus Hobarts together.

Joining them is Hughie Lewis, who has been loaned David Currie’s modified Farr 40, Ponyo. “It all started with us offering David our spare main when his was torn at Magnetic Island last year. Now he’s kindly loaned us the boat,” Lewis explains.

“We want to go up to Maggie and have some fun – and using David’s boat we didn’t want to put ourselves in any situation where we might damage it by sailing in the cut-and-thrust of IRC,” the Tasmanian admits.

“We have a group that doesn’t always sail together, including some friends. We’re ‘Gerry and the Atrics’; we’ve got to get our Zimmer frames on the boat somehow,” he says amid laughter.

On a serious note, Lewis says: “I’m really looking forward to sailing a Farr 40 again. I was the first to have one in Tasmania – I had it for 10 years – and I’m sorry I sold it in retrospect.”

Lewis continues: “We loved Magnetic Island last year. Everything is easy to get to and it’s nice spending time with lovely people there. And the sailing is really good. Denis Thompson (Principal Race Officer) is such a good operator – he’s brilliant. We learnt so much from him at one event that we took back to Tasmania – he’s so professional and does such a great job.”

The date for the Round the Island Race has been moved to Tuesday 4 September. No matter the division or the day, all enjoy themselves at SeaLink Magnetic Island Race Week, the first of Australia’s major spring regattas.

If you don’t know what you are missing, watch last year’s recap at: https://www.magneticislandraceweek.com.au/

For all information and to enter SeaLink Magnetic Island Race Week now, please go to the official website:  www.magneticislandraceweek.com.au/