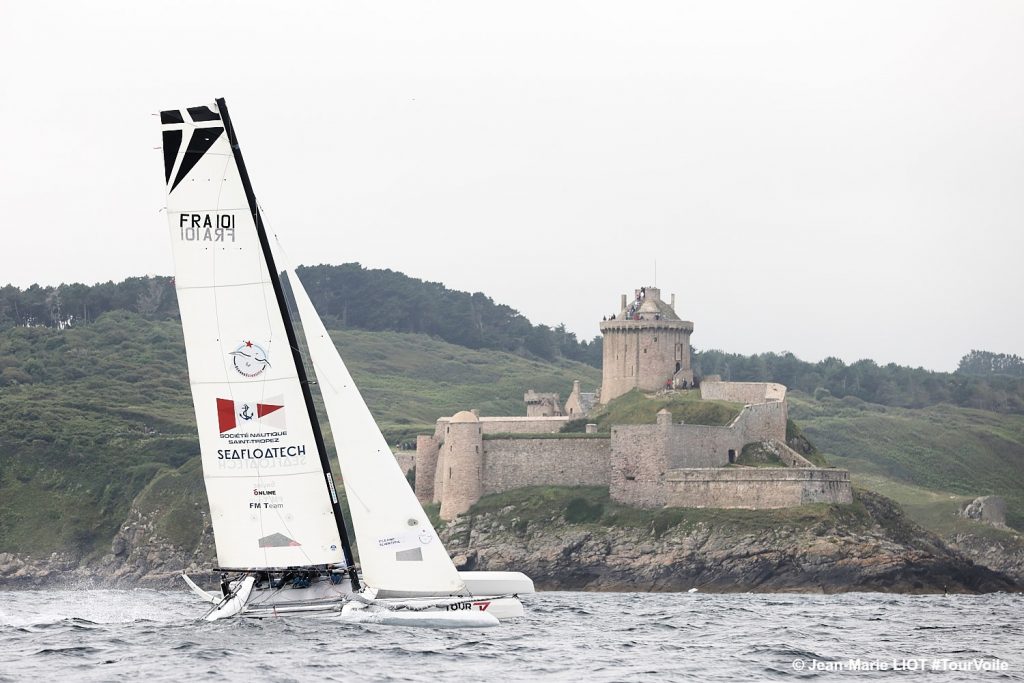 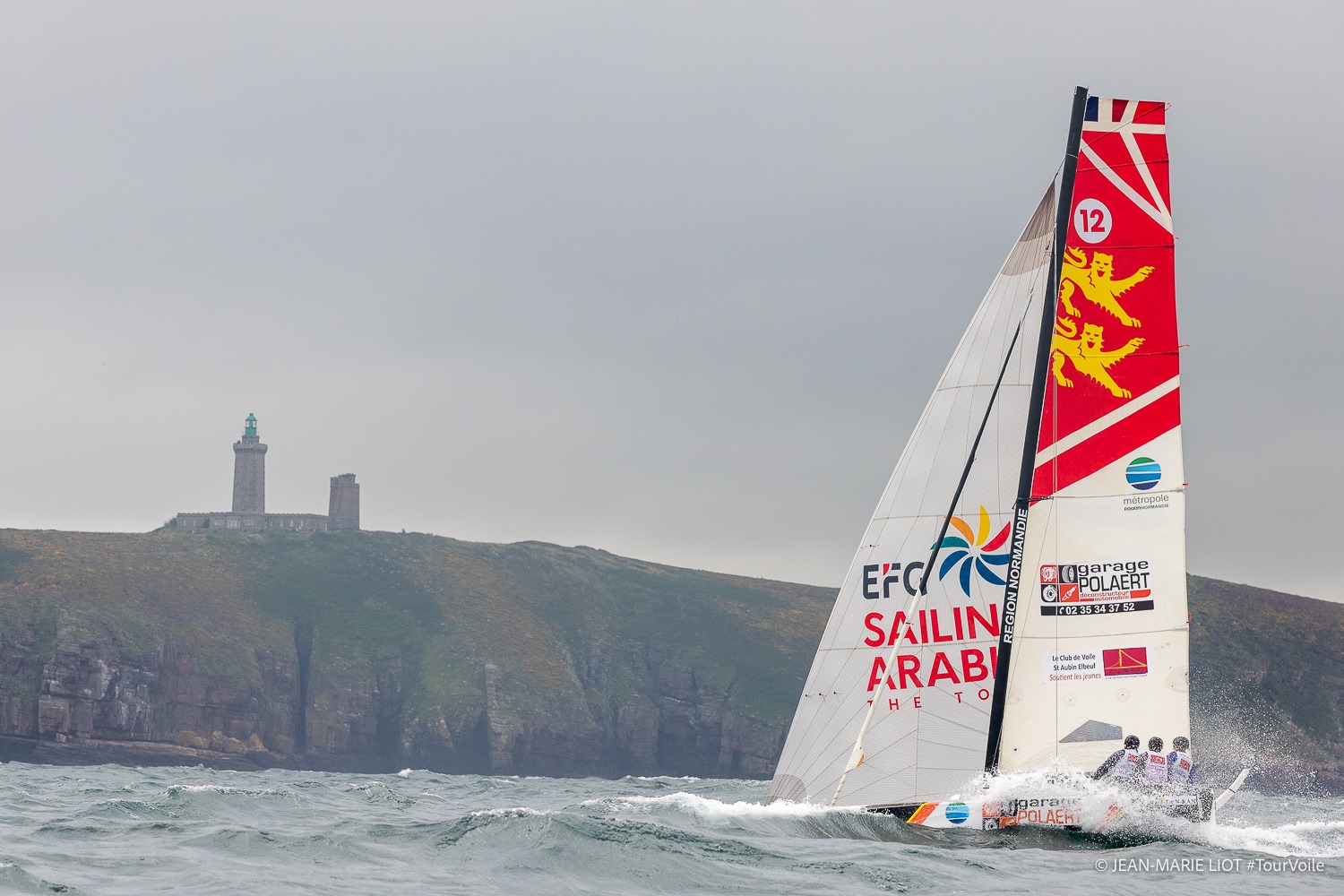 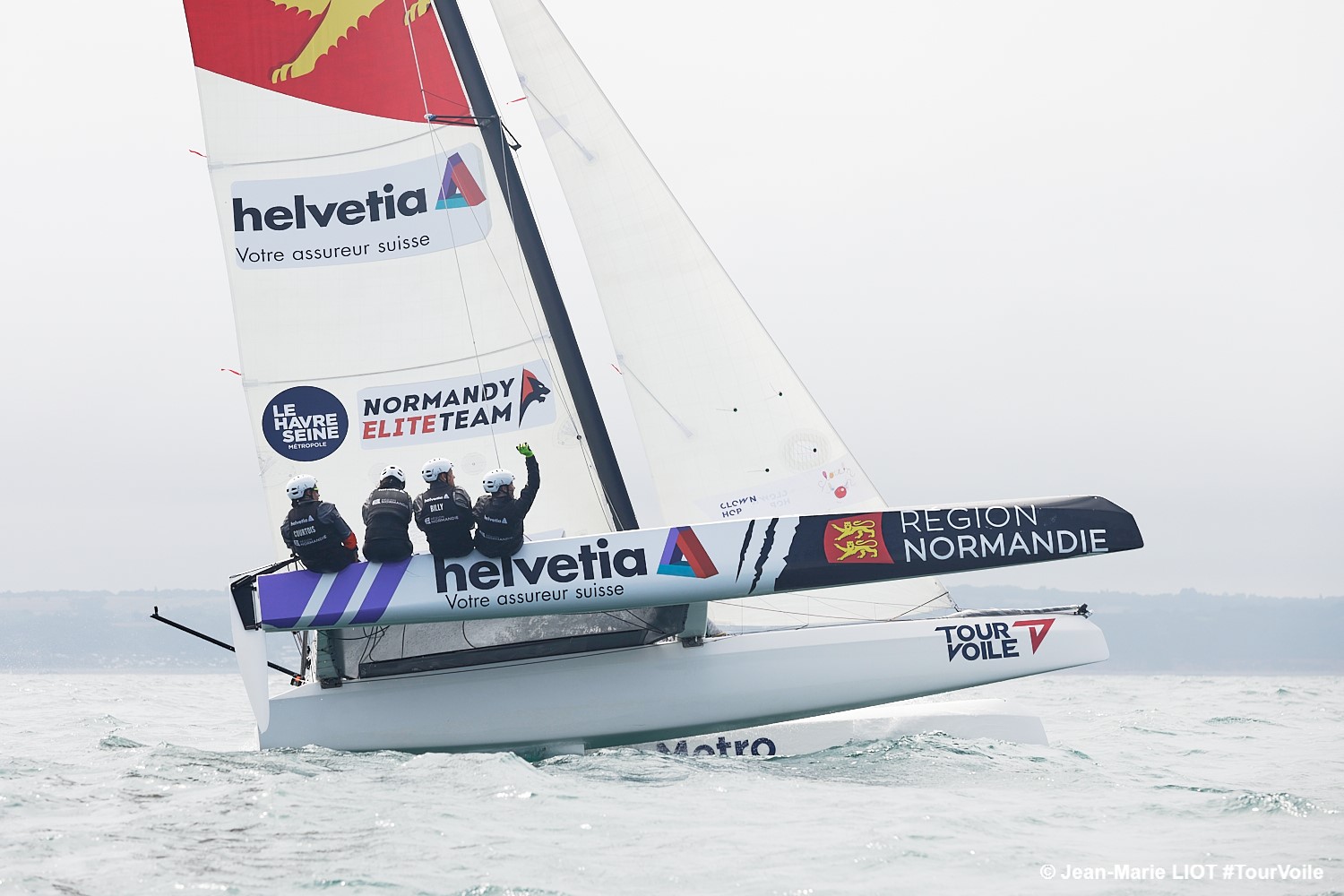 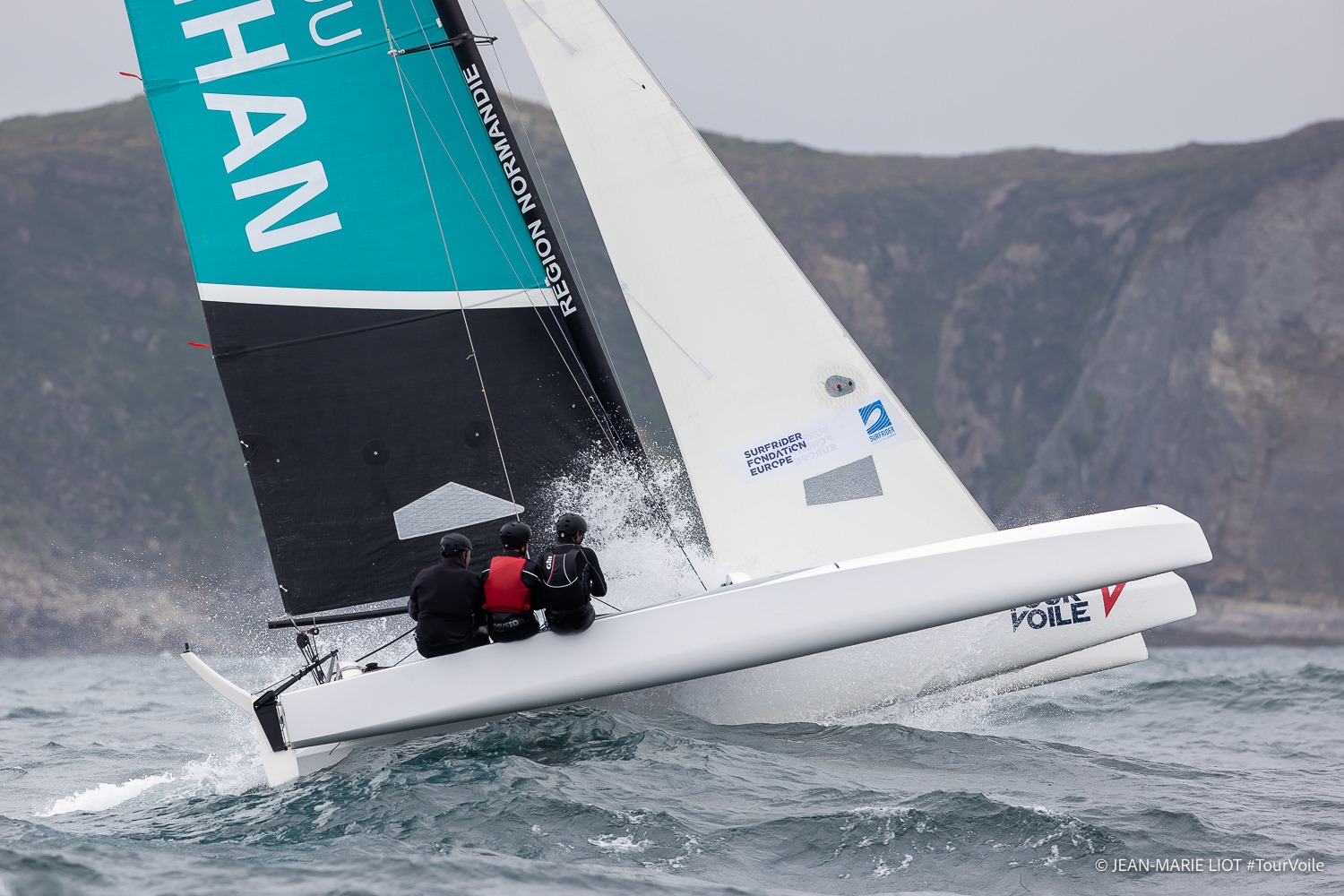 The Tour Voile: The 44 mile race in the bay of Saint-Brieuc, Erquy, France, started in a solid north-westerly wind, seeing the 10 competitors complete the race course in a brisk three and a half hours.

The Tour Voile is now one of the essential sailing events in the European calendar year. Each year, it brings together French and foreign racers. For several weeks, sailors from all backgrounds of sailing (offshore racing, Olympics, inshore, etc.) battle relentlessly to win the competition and add their names to the long list of Tour Voile winners.

For this 44th edition of The Tour Voile, eight territories will host the summer event. The crews will compete in a unique race format which will combine courses built near the beaches, coastal raids and rally stages. Erguy is the event’s fifth location so far.

Groupe Atlantic clinched its sixth victory in eleven days of racing, ahead of BE Brussels – Kidibul Powered by Flying Frogs. Groupe Atlantic have an impressive track record after winning more than half of the races in The Tour Voile 2021. Helvetia Blue by Normandy Elite Team, third today, remains in the driver’s seat in the overall standings, but Groupe Atlantic threaten are quick on their heels. The races will resume on Thursday at Châtelaillon-Plage.

The crews first passed near an exceptional site, the majestic Cap Fréhel, whose cliffs peak at more than 70 meters. They then rounded a mark positioned near Fort la Latte. Also called Château de la Roche Goyon, this emblematic fort, listed as a Historic Monument, is regularly used as a backdrop for films, such as the famous film The Vikings (1957) with Kirk Douglas and Tony Curtis or even Chouans! (1987), with Philippe Noiret, Sophie Marceau and Lambert Wilson in the cast.

Groupe Atlantic was in the lead at Fort la Latte, ahead of BEBrussels – Kidibul Powered by Flying Frogs, Royan Atlantique and Helvetia Blue by Normandy Elite Team. The crews then set their course towards the west, passed again in front of Cap Fréhel and made a long tack towards the point of Pordic, before returning to the finish line at Erquy.

Aboard Groupe Atlantic, Clément Cron, Valentin Sipan and Aristide Gasquet were in great shape and signed an undisputed victory, the sixth since the start of the Tour Voile 2021. “It was a very beautiful course with beautiful conditions. We got the boat going well, we had a lot of fun today, ” said Gasquet, trimmer of Groupe Atlantic.

He said, “It was important to get a good start because the edges were closed at the strategic level. After the clearing edge, we made few turns and gybes. It was essential to be in front and to stay swift. We had a great stage in Erquy. We are about halfway through. Tonight we are 5 points behind Helvetia Blue by Normandy Elite Team in the general classification. Anything is possible, mistakes can happen quickly. “

The Franco-Belgian crew of BE Brussels – Kidibul Powered by Flying Frogs have been producing some consistent results, finishing for the fourth time on the podium in eleven days of racing. “It was a super fast raid! You had to go fast all the time, take care of the smallest adjustments to gain a few tenths of knots and be ahead, ”said skipper Arnaud Vasseur. “We are ramping up. We started from scratch at Dunkirk with a brand new crew and a lot of changes announced throughout the Tour. A small ascent begins, we can start dreaming of a podium!”

BE Brussels – Kidibul Powered by Flying Frogs moved up to fourth on equal points with the female crew of Helvetia Purple by Normandy Elite Team (who took fourth place today thanks to a very good strategic move towards the end of the race), 2 points from Royan Atlantique.

The event will have a lay-day on July 14, with racing set to resume on July 15.