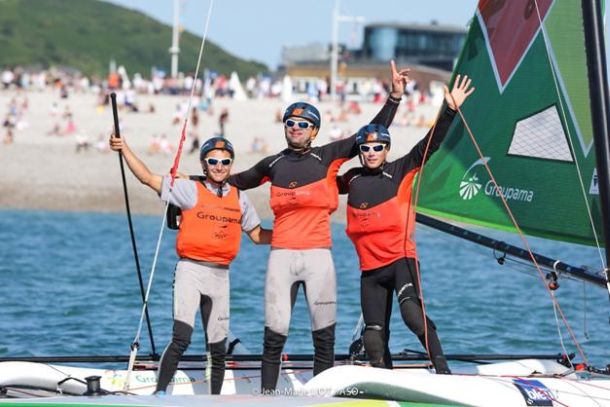 After an amazing tacking battle at the bottom of the cliffs, Pierre Pennec and his crew onboard Groupama won the coastal race of Act 2 in front of CombiWest, and West Courtage Ecole Navale. Race leader Grandeur Nature Veranda finished 4th and keeps the lead.

It was a beautiful day on the water with champagne sailing conditions. But the fleet could have done with a bit more wind. The south-westerly breeze died off around midday and the sea breeze took a while to kick in. The start had to be delayed and the 28 boats finally crossed the start line at 14h42.

Helmsman and tactician onboard Groupama, Pierre Pennec tells us about the race: “On the way down to Etretat, we had the tide against us, but it was weaker near the coast, so we stayed on that side for a while before going offshore with the rest of the fleet, as we didn’t want to take big risks. Before the mark, the wind was very unsettled in strength and direction, but we made some nice jibes. Then on the way back we had a nice tacking battle and again we made really nice tacks. We passed West Courtage and we were making ground over CombiWest. It was full-on match-racing with them at the end .”

Pierre Pennec is no stanger to this race course, having previously sailed on the ORMA circuit in Fécamp. But to him, the advantage on the water was mainly due to team work. “I think in the second part of the track, coming back to Fécamp, we were above the other teams in terms of manœuvers. We made very nice tacks and made ground meter by meter, whilst minimizing the risks .”

Second place goes to CombiWest, who did an excellent race, leading the fleet most of the way. The team who finished 12th in the first Coastal Race in Dunkirk is still satisfied with their result. Damien Iehl, helmsman and tactician onboard, admits they still need to improve. “We were a bit disappointed when Groupama passed us, but we had a great fight with them and we finish not far behind. They sail really well and they are multihull specialists. But we’ve watched them a lot to try to get better.”

After their 14th place in Dunkirk, WestCourtage takes third step of the podium today. A great performance for Simon Moriceau who surprised everyone on the finish line, as they were not positionned on the online race tracker.

Overall, Grandeur Nature Veranda stays at the top of the leadership, in front of Groupama and Vannes Agglo Golfe du Morbihan, one of the six Corinthians teams in the fleet, who seems to be very consistent since the beginning of the Tour. Team Oz (Brett Dryland and Rod Waterhouse) are currently in last place.

Tomorrow the fleet will compete in a series of Stadium Racing regattas, in stronger wind conditions.

QUOTES OF THE DAY :

“Tomorrow will be a windy day and it’s great for is because we won the only stadium race in Dunkirk with one reef in the main, so we are looking forward to it.”

“The weather conditions at the start were a bit stressfull because we could have lost a lot over the other competitors. But we placed ourselves well in the middle of the pack. We could have taken more risks, but we chose to play it cool. We round the bottom mark 10th, but we were faster to build some speed after each tack and we passed a lot of boats. We feel confident for the rest of the event .”

“We had to play with the coastal current and wind and going to close, we hit the ground twice, and lost a few meters. We’re lucky to only have small damage on the daggerboard.”