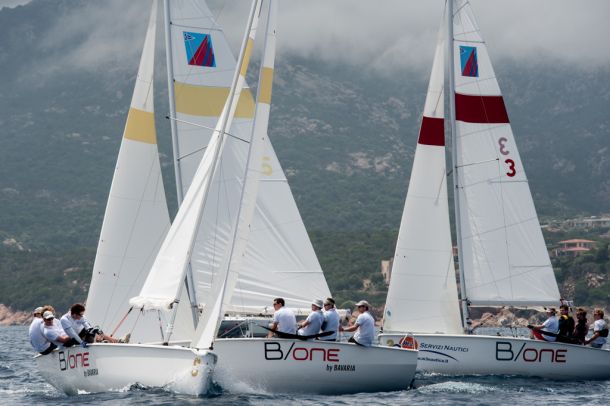 Porto Cervo, 3rd July 2014. The first edition of the Invitational Team Racing Challenge, organized by the Yacht Club Costa Smeralda in Porto Cervo, got off to a superb start with perfect sailing conditions and well over half of the matches in the round robin completed on day one. The eight competing teams proved themselves to be highly competitive over the course of today's 20 fast, fun and incredibly hard fought races.

Although the day dawned humid and overcast with fairly strong winds blowing off the north-eastern coast of Sardinia, the easterly breeze had settled down to approximately 14 knots by the start of racing and would hold steady for most of the day to provide excellent conditions for team racing aboard the Bavaria B/One craft used for the event.

The British team representing Royal Thames Yacht Club had an outstanding day and, having completed their full quota of seven matches in the Round Robin, sit comfortably on six wins out of seven races run. Only the Yacht Club Costa Smeralda team, captained by Filippo Molinari, managed to beat the RTYC today, one of the YCCS' three victories out of five races run. Fellow Italians of the Circolo Canottieri Aniene also had a positive day, as did the German team representing the Norddeutscher Regatta Verein, both of whom also notched up three victories over five matches.

The next appointment for the competing crews on the race course is scheduled for tomorrow at 11.30 a.m. to complete the remaining four flights of the Round Robin. Racing will then continue to define the fifth to eighth placed crews, leaving the top four teams free to enjoy an afternoon off in the stunning surroundings of Sardinia's Costa Smeralda before Saturday's petit final and final. Sunday 6th July is set aside as a reserve day.

Tomorrow's forecast is for 12-14 knots of east-south easterly wind.

The Preliminary Results and full event details are available on www.yccs.com.