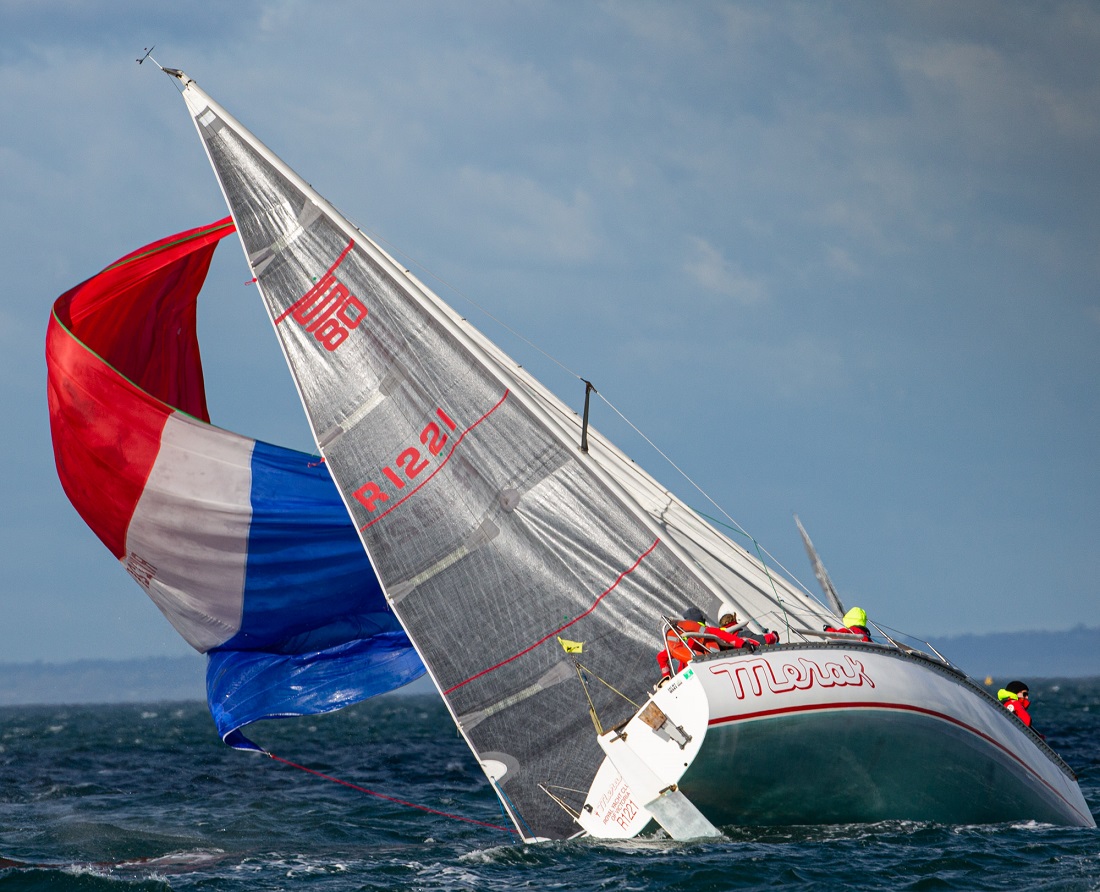 Racing was delayed on Day 3, the final day of the Australian Women’s Keelboat Regatta (AWKR), but it got underway on Port Phillip shortly after 11am and little did anyone suspect winds would reach 25-30 knots with gusts as much as 35 recorded.

The high-profile crew on Ocean Respect Racing skippered by Pittwater match racing champion, Katie Spithill, did not even get off the start line after an incident which left them with damage and unable to race. They immediately protested Up ‘N Go and asked the committee for redress.

However, Ocean Respect Racing has won Division 1 of the regatta overall regardless, as they scored five straight wins and had a race drop in store.

“We were about seven minutes from the start when the breeze increased and we altered to avoid a collision, but they lost control again and there was nothing we could do. There was damage to our port quarter and our lifeline was sheered away, so we had to retire. We have no hard feelings towards them, it’s just a process you have to go through,” Spithill said.

“We’ve loved the regatta though. The venue is great, everyone is friendly and my crew have been amazing. Some haven’t sailed together before, but I’ve sailed with all of them. We would have just loved to finish that last race because we were tied in IRC with Jungle Juice,” said Spithill, whose crew included some from their 2018 Rolex Sydney Hobart campaign.

With their usual skipper, Stacey Jackson, Spithill said they are aiming to train hard with hopes of finding a financial sponsor for the upcoming 75th Sydney Hobart.

“How disappointing for Ocean Respect; I’m devastated for them. We were looking forward to racing them on the final day, as we were tied for first place with them on countback in IRC,” Heenan said.

“It was a nice breeze when we went out. It was only in the five minutes before the race started that the wind piped in and was oscillating. It was solid high teens and then into the 20’s. Our main was inside out at one stage, but we had a couple of nice surfs downwind. We tried to stay in touch with Chutzpah, as we were equal second on countback with them coming into the final race,” she said of their odd predicament with ties in two classes.

“Not really expecting to get that many wins,” Harding said. “We had not expectations coming in. We just did our best to get around the course safely and keep it simple. This is the first time we’ve done this regatta, and it’s great to get a win, because it’s Connor Burdon-Bear’s (crew member) birthday. We thought we‘d do it as a happy birthday present for her!

“We’ve already booked in for next year – and hopefully with the same boat. We were talking about the regatta on the water – it’s a great environment for women in sailing. We had a ball and met lots of nice people. It was inspiring to have and meet some people here that I idolise,” she said of the likes of Katie Spithill, Carolijn Brouwer and Sophie Ciszek.

The New Zealanders were caught in a Victorian sandwich when a second SYC member, Sally Williams, finished third overall at the helm of the Young 88, Young Bears. However Farmer’s crew did end up No. 1 – in the S80 division which they won from the Cath Beaufort steered Up’N Go (Vic) and Merak (Tanya Kelly, Qld).

In IRC Division 1, Jungle Juice pipped Ocean Respect Racing by less than one point after the latter was given average points on winning their protest. The Katie Holroyd steered Serious Yahoo, an Adams 10, finished third.

Division 2 IRC went to Up ‘N Go, despite being disqualified from the final race after the incident with Spithill’s boat. Young Bears was second and Merak third.

In EHC Division 1, the final pointscore was tight. Sunshine, an Adams 10.6 skippered by Sandy Anderson from Western Australia, won in a close competition throughout with Ocean Respect Racing and third placed Tracy Richardson’s Adams 10, Rage (NSW). There was just two and a half points between the three, courtesy of average points for Spithill.

Division 2 was won by Young Bears from the S80 Recycled Reputation, helmed by Helen Warneke (Qld), with Gridlock third.

In other incidents during the day, South Australian 11 Metre One Design, Balancing Act 2 (Janet Thornley), lost her rig on the third leg of the race – this after being trucked all the way from Adelaide.

With mains reefed right down, there were still struggles as 14 knots quickly turned to white caps on the Bay. As the fleet made its way downwind, it became imperative to maintain slick crew work. However, a handful went prawning with their kites when halyards were not handled well. A few of the less experienced retired, thinking it better to be safe ashore.

Drizzling rain on a cold morning set the scene as the crews of 39 boats waited ashore at Royal Melbourne Yacht Squadron, host of the event, waiting for the AP flag to come down.

Eventually a watery sun made an appearance, along with some breeze, and officials called competitors to the course for a final race starting shortly after 11am.

Winners of both divisions are decided under AMS, with trophies and prizes for winners of IRC and EHC categories also awarded, along with a trophy for the S80 division winner.

Holly Farmer and her crew from New Zealand led the S80 pointscore from Day 1 and did not relinquish their lead throughout to claim that trophy. Escape also won last year with a Kiwi crew from the same club, the Tauranga Yacht and Power Boat Club.

Novice Helm – The person must not have helmed regularly for more than 12 months and their first time helming at the regatta. The Award went to Kim Rosman, Rock ‘N Roll.

Most improved over the series – Karen Geach (Outlaw)

Sportsmanship (awarded by the Race Committee) – Janet Thornley (Balancing Act 2) for persistence and resilience after two situations; first the spinnaker halyard got stuck at the top of the mast, causing their retirement on Day 1. Then the boat was dismasted on Day 3, but all are safe and ready to go again next year.

Rohan Brownlee Leadership and Endeavour Award – Tracy Richardson (Rage). She got the crew together, motivated them and helped them learn and grow in a safe, fun and supportive environment.

This is Australia’s largest women’s keelboat regatta with a record 40 yachts and 300 women taking part from Australian and New Zealand. Ages of competitors varied from 15 to early eighties.

It was good to find a few girls from Youth Development programs here sailing, including 20 year-old Madeleine Kornman from the Royal Sydney Yacht Squadron in Sydney.

“I match race in Elliott 7s; I’ve never sailed an S80 before. I’m here with Kim Ketelbey's crew from our Club. We heard about the regatta from Karyn Gojnich (also racing here on Spike) and it’s the best thing I’ve done. I’ve really enjoyed it and learnt a lot,” said Kornman, who is doing bow on Intrusion.

Gojnich is such a fan, she hoping to increase the numbers from her Club here next year. “I’d love to get some other boats here and particularly from the Youth Development, it’s such a good regatta for them to do and learn from,” the triple Olympian said.

Thanks must go to all the friendly volunteers, with a special mention to the ‘Boat Buoys’ who were on hand every day to help with any quick fixes, launching and grabbing a line when the boats returned to the marina. They doubled by firing up the barby each day after sailing.

Thanks also to those who so generously loaned their yachts again, so that so many women from around Australia and the crew from New Zealand could take part in this continuously growing regatta that showcases the growing pool of talented female sailors in this country.

For full results, all the news and more: https://www.awkr.com.au