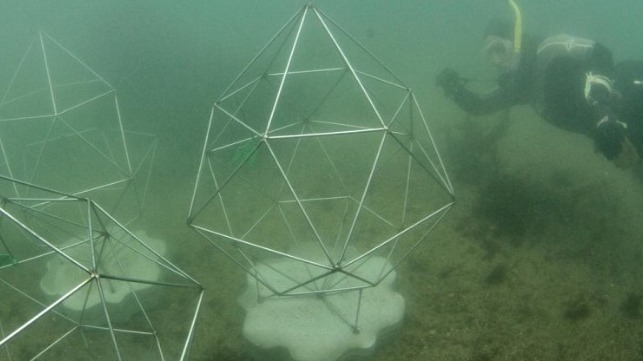 A series of modular steel and concrete pods have been installed underwater around the Sydney Opera House in Australia to test the marine biodiversity enhancement value of artificial structures.

The initiative is a result of a three-year partnership between University of Technology Sydney (UTS), the Sydney Opera House and the NSW Government.

What began as a low-tech construction made from milk crates has morphed into something more sophisticated under the leadership of UTS Professor of Marine Ecology David Booth. Now installed alongside the Opera House sea wall at Bennelong Point are eight modular artificial reefs, each containing three hexagonal-shaped units.

Created by Reef Design Lab, the meter-high pods are made from marine-grade steel and concrete and feature elements of 3D printed design. Half of the units have additional complexity in the form of triangular tiles.