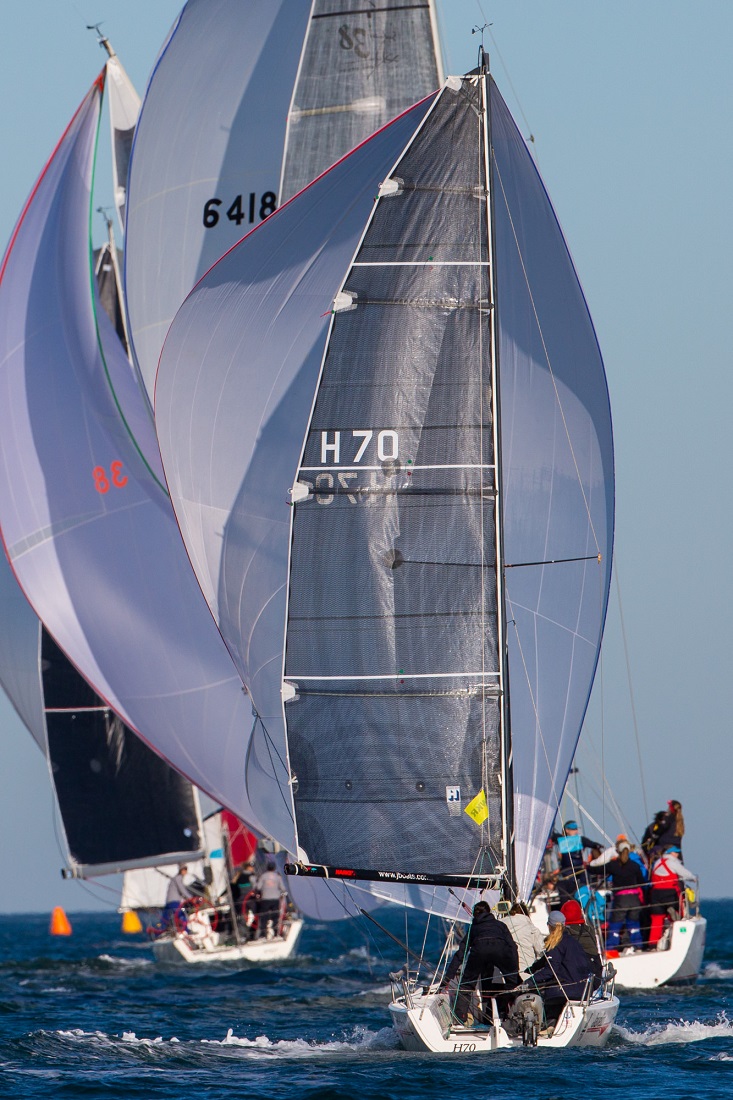 Two more races put to bed for the 39 crews on Day 2 of the Australian Women’s Keelboat Regatta (AWKR), hosted by Royal Melbourne Yacht Squadron, on a windy and brittle Port Phillip today with the Katie Spithill skippered Ocean Respect Racing taking a further two wins in Division 1 for a series clean sweep with one day remaining.

Race 4 kicked off at 10am and Ocean Respect Racing from Pittwater in NSW stuck with their winning streak strategy. Skippered by past match racing champion Katie Spithill, the M.A.T. 1010 scored a two-minute win over the quickly improving Sydney 38, Chutzpah38, an experienced round the buoys Tasmanian team skippered by Jo Breen.

Hot on Chutzpah38’s tail though, was Claire Heenan’s Adams 10, Jungle Juice (NSW), which coming into Day 2, was second overall on the leaderboard.

Race 5 and the battle was really on with Chutzpah38 and Jungle Juice sharing second place in the race, to now be tied on equal 9.5 points overall for second place. All will be resolved tomorrow in the final race.

“We’re equal second in AMS and equal first in IRC – both on countback,” said a bemused Heenan, who has done the AWKR four times now. “We’re just trying to sail as well as we can, while enjoying ourselves – we are looking for the best outcome keeping those things in mind.”

Heenan, who sails Etchells back home and comes together with this crew for the AWKR and sometimes the Sydney Harbour Regatta in Sydney, stated: “There are no rock stars on this crew – we’re a Corinthian crew.”

Team Jungle Juice has sailed well across all conditions, including in today’s two races with winds “not too shifty and in the teens,” Heenan said. “We don’t have much in the way of instrumentation on board, so it’s more or less seat of the pants sailing for us.”

Heenan also sailed Jungle Juice at last year’s event. “I have to thank Janet Dean for loaning the boat to us; it’s very generous of her.” She also praises RMYS and the committee, saying, “They put on a great regatta for us and we love the Boat Buoys, they are a great idea, and very helpful for fixing little things and arriving in time to catch a line when we come in to dock.”

Laura Harding steering yesterday’s Division 2 leader, Gridlock, to a further two wins today, keeping the pressure on the other 14 boats in the Division. Harding and her fellow J24 crew from Sandringham Yacht Club are having a great regatta.

Harding scored a 13-second win over Leo Eeckman’s Southern Ocean 31, Le Cascadeur in Race 4. Sally Williams was third at the helm of the Young 88, Young Bears, making it an all-Victorian show.

In Race 5, Gridlock took the win from Young Bears, the Young 88 skippered by fellow SYC member, Sally Williams. Cath Beaufort, from RYCV, was third aboard the S80, Up ‘N Go. Another shoo-in for the Victorians.

With one race remaining, Gridlock appears to have it in the bag, with New Zealand first timer, Holly Farmer in second with the S80, Escape, which finished fourth in Race 5 to remain a contender. Le Cascadeur is nicely placed in third overall.

Farmer and her crew from Tauranga Yacht and Power Boat Club, the home of New Zealand’s America’s Cup winning helmsman and Olympic gold medallist, Peter Burling, are currently second overall in Division 2. Farmer also leads the pointscore for the S80 class, with Up ’N Go in second place and the Tanya Kelly skippered Merak from Queensland in third.

“It’s our first time here, we heard about this regatta from other women at home who have been here before. The racing is close; anything could still happen,” Farmer said.

Leo Eeckman is resigned to a best result of third overall come the end of the event. “I think tomorrow will be about securing our third place. We will have to sail well,” admitted the Hobsons Bay Sailing Club (Vic) sailor.

“Unfortunately, we had to use yesterday to learn to sail the boat together, and we made a few mistakes, so lost a bit of ground. But we came out of that; we made a good recovery and sailed well today. We got the gun in the first race of the day, so that was good,” added Eeckman who has done four AWKRs, the last three as skipper on Le Cascadeur.

The French skipper, who has lived in Melbourne for 10 years, said the reason she keeps returning to the regatta is, “I think the fact that it’s getting bigger and the competition is going up every year with a lot of people supporting it – so many people spectating on the water – how many regattas have that?

“The organisers and committee did a good job of promoting it well this year too. They have made it a big successful national regatta.”