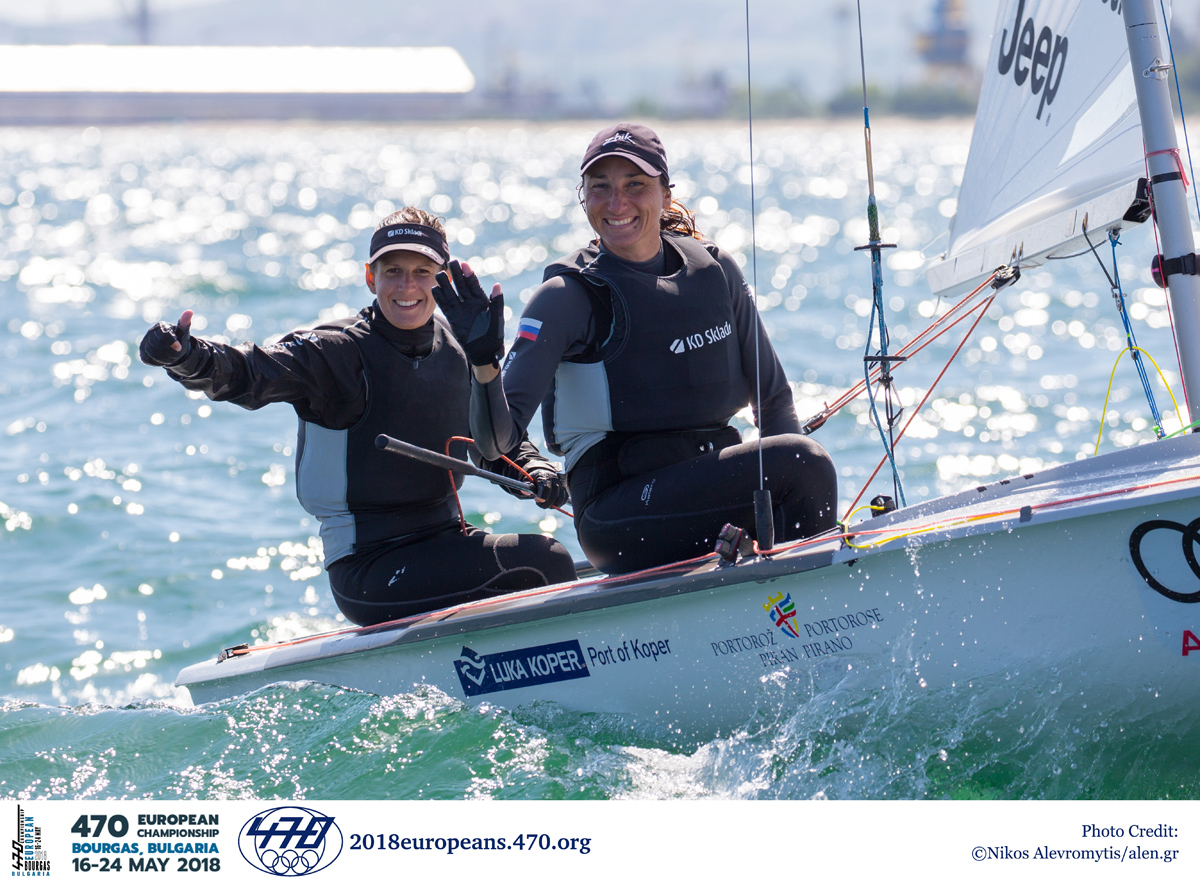 Stunning conditions saw racing unfold under a blue sky in breeze of around 18 knots. There was no let-up though as teams paced around the track and tried to break away to the front, knowing today could be make or break to position their selves in with a chance of a place inside the top ten. Conditions are tricky for all and every race is different, with different teams gaining and losing over different race legs.

A trading of places in the 470 Men as Anton Dahlberg/Fredrik Bergstrom (SWE) take over the lead from their 2,2,1 scorecard. Greece’s Panagiotis Mantis/Pavlos Kagialis drop to 2nd, with Russia’s Pavel Sozykin/Denis Gribanov (RUS) in third. The fight between these three is finely balanced.

In the 470 Women, Slovenia’s Tina Mrak/Veronica Macarol advance to top the leader board from scores of 2,2,1. Overnight leaders Gil Cohen/Noa Lasry (ISR) are in 2nd, with Great Britain’s Amy Seabright/Anna Carpenter shifting up to third.

Time now for bodies to recover from the physical demands of the day, ahead of the two races tomorrow to decide the top 10 teams advancing to the podium deciding medal race on Thursday 24 May 2018. All know what it takes to win, as Wednesday’s two races are set to be another spectacle of intensity and resilience. Enjoy the Race Day 4 highlights video.

After opening their series on the backburner, Slovenia’s Tina Mrak/Veronika Macarol rediscovered their “mojo” today, executing a perfect race strategy to climb to first from 8th at the start of the day. Today we made really good starts and focused on improving our sailing, as the previous days we didn’t find the right movement,” said Mrak. “So, all three races we were in front already in the first upwind, so it was a more easy job to finish the race.

“We are really happy for the next races before the medal race,” continued Mrak on Wednesday’s two races. “Our aim is to make clear starts, sail fast and do our own racing.”

Olympians and Championship medallists like the Slovenians however have not overlooked the young and new talent in the fleet, as Mrak said, “It is nice to see new faces in the fleet and with the really light wind they can be really fast. We must not treat them like juniors, because they can sail really fast and come in front.”

Overnight leaders Gil Cohen/Noa Lasry held their pace in the first two races, scoring 4,1 before their 15th place finish in race 9 handed the lead to the Slovenians. Great Britain’s Amy Seabright/Anna Carpenter move up to third.

Defending 470 European Champions Afrodite Zegers/Anneloes van Veen started strong, winning the opening race of the day, before two double digit finishes pushed them out of the the top three.

The 470 Women leader board top ten features the same teams at the end of the day as at the start, just a different order as they moved up and down the scorecard as frequently as the contrasting race track.

Less than one year ago, Sweden’s Anton Dahlberg/Fredrik Bergstrom marked a career milestone when they walked away with the 470 World Championship silver medal. Judging by today’s performance they are well in touch to deliver another podium finish here in Bulgaria.

“We managed to do those small things great which really paid off,” explained Dahlberg about their performance. “I am expecting super tough racing tomorrow. All the people are pushing so it will be very tight out there. Small gains is what we are looking at, pushing all the way around the course. It is amazing conditions and we need to sail fast all the time.”

It was no easy day, and the physicality required was extreme, as Bergstrom said, “I am exhausted. Three races today as well, and the conditions today where you as crew need to work all the time. Three races take my energy out for sure, but we managed to sail really good today and had a great result.”

Anticipating the day ahead on Wednesday, Dahlberg added, “I am super happy with the results we did today and I am expecting similar conditions tomorrow and I know for sure a small mistake at the beginning of the race or any time can end up in a disaster.”

The pair already counts a 28th score as their discard, so have no margin for error.

Panagiotis Mantis/Pavlos Kagialis (GRE) couldn’t match the speed of the Swedes, and had to settle for finishes of 5,5,10 and lost out on the series lead they held going into the day, to sit 10 points behind. Also dropping a place are Russia’s Pavel Sozykin/Denis Gribanov, but they do hold an advantage over both the Swedes and Greeks of a lower scoring race discard, so have a little more room to possibly take some risk tomorrow.

Performance of their series so far, and 2nd best performance of the day after the Swedes, went to Austria’s David Bargehr/Lukas Mahr, who now find themselves just 8 points off the top 10 from their 1,12,2 race day.

“We are very happy, especially when we consider our first day, so we have improved our performance a bit,” said Bargehr. “We had good starts and in this fleet it helps a lot. The speed is really equal and if you have a good start is a super big advantage.”

“The fleet is pushing very much, so it is a kind of risk management. How much risk you take at the start and how conservative you are to not be over. Because once you are over the race is over.”

Mahr added, “We will try not to take too much risk tomorrow. Every minute think about what is next, what comes next, take the next step and try to enjoy every minute on the water.”

The Austrians are also on a trip down memory lane, as the first 470 Championship they competed in together was the 2007 470 Junior Worlds here in Bourgas.