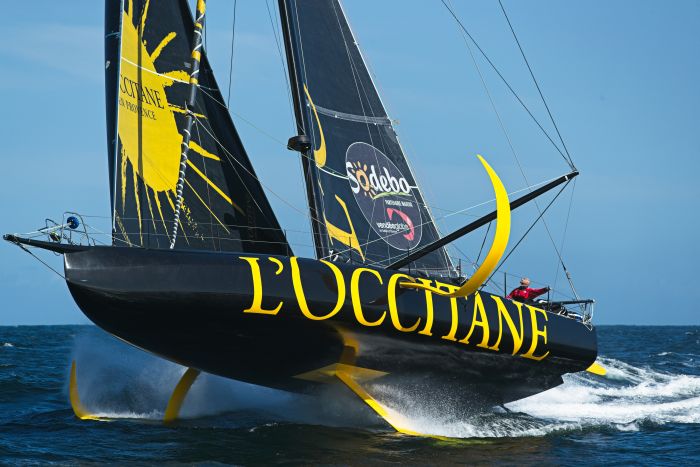 #EN# GROIX, FRANCE – MAY 23 2020 : French skipper Armel Tripon is training on Imoca L’Occitane en Provence off Groix for the for the Vendee Globe sailing race around the world, on May 23 2020. (Photo by Pierre Bouras / L'Occitane en Provence).

Sunday has scarcely been a day of rest on the Vendée Globe even if it is the first day since last Tuesday that Les Sables d’Olonne has not welcomed a finisher across the line and into the famous channel. Preparations have been in full swing for the arrival of the Armel Tripon (L’Occitaine en Provence) who is due early Monday morning and should take 11th position.

But not for the first time in the history of the Vendée Globe will a skipper’s last 24 hours be possibly the toughest of his race. This is especially true for the forty-five-year-old skipper from Nantes who at times was blessed with some very straightforward routing in the south. Tripon will come in the heels of a depression which is expected to have gusts of 45 knots and bring 5 to 6m waves on the finish line.

The depression, and a next big one rolling in, is a stark reminder it is winter in the North Atlantic. The train of lows is a reminder that nothing can be taken for granted on this epic race, especially for tired boats being sailed by tired skippers.

Each of the 15 skippers still racing have their own challenges, personal and sporting to fulfil. Three main groups remain with their races within the race. Clarisse Crèmer in 12th is NE of the Azores and is slightly on her own now. It is almost hard to reconcile her racing in the south alongside Romain Attanasio when she is now over 900 miles ahead. But Cremer, at 31 the second youngest skipper, will be the first woman to finish this race

Now side by side off the Canary Islands, Romain Attanasio and Jérémie Beyou will first have to cross the Azores high before catching the westerlies that will push them to the finish next weekend.

February 10, 11 and 12 will look to repeat the first crazy days of first finishers with five skippers due back-to-back, those from 15th to 20th place: Arnaud Boissières, Alan Roura, Stéphane le Diraison, Kojiro Shiraïshi, Pip Hare and Didac Costa. This posse is sailing in the trade winds to the north or at least at the latitude of Cape Verde.

Then, around February 17-20, it will be the turn of Manu Cousin, Miranda Merron, and Clément Giraud. This trio are still in the trade winds of the South Atlantic, off the Horn of Brazil, in a rather nasty sea. In the next few days, they will cross the equator and the doldrums.

It will be the end of the month, or even the beginning of March when Alexia Barrier and Ari Huusela should reach Les Sables d’Olonne. The Franco-Finnish duo preceded by Sam Davies, out of the race – are caught up in a chequerboard of high- and low-pressure areas off Argentina.