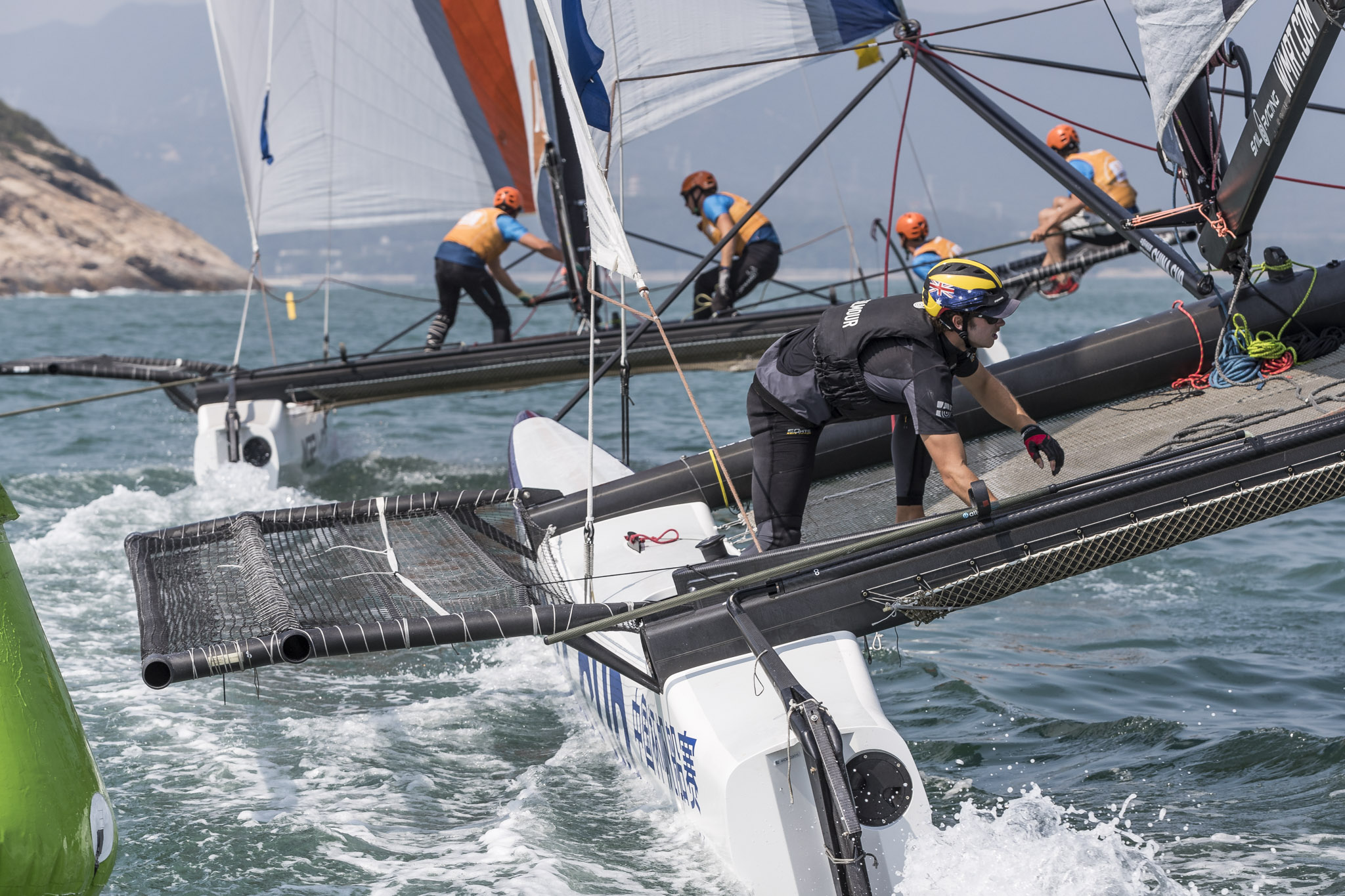 Shenzhen, China (October 26, 2017) – Joachim Aschenbrenner defied the odds today to battle his way out of the Sail Off and into the Super 16 stage at the 2017 WMRT Match Racing World Championship. The final of the World Match Racing Tour in Shenzhen is every bit as challenging as the 18 international teams might have expected, and the young Dane capitalised on the fickle light airs to dispatch two hot Australian crews out of the competition in the three-way Sail Off.

“We really spent the last two days getting familiar with the boats,” said Aschenbrenner. “Today it started coming together with boat handling, communication and speed.” The Dane also took full advantage of some misfortune for Steve Thomas whose rudder kicked up when the Australian boat hit some debris in the water. “That allowed us to catch up,” admitted Aschenbrenner. “We had a close race and made a tack where we could get inside him and finish it off.”

Meanwhile four skippers have already booked their spot in the Quarter Final stage after sweeping aside their rivals in the Super 16. Pieter-Jan Postma has looked strong in the fleet racing stage as he topped the group, but today the ‘Flying Dutchman’ came up against the fearsomely talented match racer Torvar Mirsky from Australia who beat him 3-1. Postma was gutted not to make it to the next stage but Mirsky was too sharp. Not that Mirsky was taking anything for granted. “We’re just relieved to be through to the Quarter Finals. This format is brutal. If you win this you're in the top eight, if you lose you go right to the bottom. You instantly beat eight other teams just by being in the knockout.”

In their first match, Postma took the fight to Mirsky in the pre-start and had the Australians well under control. But then Postma’s rudder hooked the pin end start mark and he was stuck as Mirsky wriggled free and out into the lead. “He got a bit unlucky catching the mark,” said Mirsky. “The team rallied and we sailed quite cleanly around the course; we’re really relieved to still be in the hunt for this championship.”

While defending World Champion Phil Robertson beat Sam Gilmour, the Kiwi’s 3-0 scoreline did not tell the full story. “Gilmour is never an easy beat. Sam's had a cracker of a season and he pushed us pretty hard in the starts. But we had just a click of speed on him around the track, especially downwind. The boys have sailed a lot of multihulls in light airs and you can see the difference in experience on a day like today.” Robertson will use tomorrow to relax and take stock of where they’ve got to in the competition. “This is a glamour little location here in Shenzhen, especially for our team being backed by Ningbo. We're stoked to be here. We're improving every day and still plenty to come. That's the trick, you've to be firing on all cylinders when it really matters.”

Sweden’s Nicklas Dackhammar fell to his rival Ian Williams who won his Super 16 round 3-1. The most successful helmsman in the history of the Tour, Williams is looking dangerous here and particularly so after his win at the recent Chicago Match Cup.

Yann Guichard is best known for his round-the-world exploits, sailing far from land, let alone anywhere near other boats. The one-on-one aggression of match racing has been his weak point at times this season, but he’s been working hard to change that. The Frenchman beat Sweden’s Johnie Berntsson 3-1. “We were very aggressive in the start and won four in a row. That's good for us because it has been a weakness but it was a lot better today. We have been working hard on our match racing skills; winning the qualifier in Alicante was very important and in the past I haven't been aggressive enough but today was different and we worked hard to keep control of the other competitor.”

Today was the day that more than a hundred keelboats arrived on their passage race from Hong Kong in readiness for three days of inshore competition in Daya Bay. It’s going to be a busy day on the water for everyone on Friday. Guichard welcomed the arrival of the keelboat competitors, who include Emirates Team New Zealand. “It’s nice to share this event with the China Cup. It’s a beautiful place, such a great place for sailing. Tomorrow it will be nice to have the other boats sailing around us.”