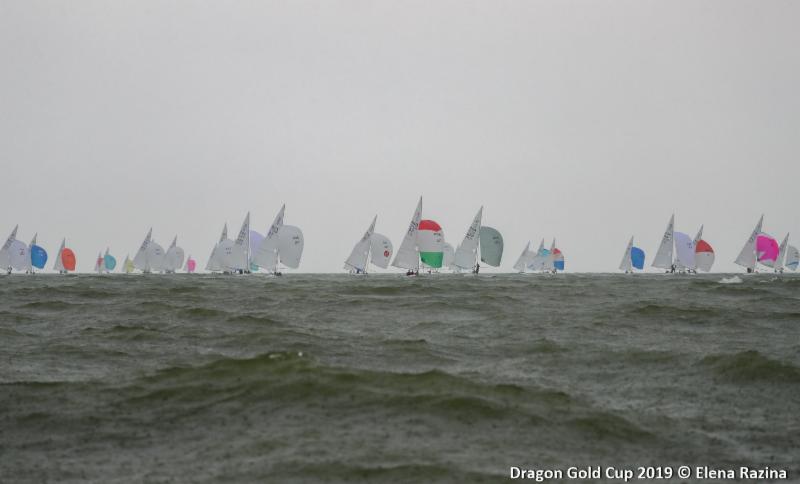 12 June 2019 – Medemblik, Netherlands – The 93-strong International Dragon fleet had to face a rain storm of almost biblical proportions on the fourth day of the Yanmar Dragon Gold Cup 2019 in Medemblik, as race four of the six-race series was completed. The teams left the dock under leaden skies in a boisterous northerly for the long sail out to the race area. The race committee’s first attempt at starting under U Flag had to be recalled as the fleet was simply over eager. The second had to be postponed because of a fifteen-degree right shift, and the third also had to be postponed before they finally got away under black flag at the fourth time of asking.

Right was the way to go on the first beat and the boats stormed off up upwind in 18 knots from 020 degrees, pounding into the notoriously aggressive Ijsselmeer chop. As they rounded the weather mark the rain began and by the end of the first lap it was torrential and had set in for the race. It was another extremely difficult day for the tacticians as the rain played havoc with the wind direction and speed. On the final run it began to drop right away and the last beat was a painful slow crawl to the line.

Hungary’s Ferenc Kis-Szölgyémi initially headed the fleet, but at the first leeward gate Peter Gilmour’s Japanese Team Yanmar slid into the lead by a whisker from Holland’s Pieter Heerema, Kis-Szölgyémi, Denmark’s Jens Christensen and Germany’s Marcus Brennecke. Russia’s Anatoly Loginov rounded in sixth with Britain’s Gavia Wilkinson-Cox and Switzerland’s Hugo Stenbeck side by side and right on his tail. Frenchman Gery Tretesaux and overnight leader Pedro Andrade of Portugal rounded out the top ten at the end of the first lap.

The fleet is so evenly matched that place changes were constant. Up front Gilmour was using all his many years of experience to fend off multiple challengers and he very nearly succeeded, but while Heerema, Christensen and Brennecke lost ground, Evgenii Braslavets was on the charge and tore up the tricky light airs final beat in masterly style. On the final approach to the line Braslavets snatched victory from Gilmour with Trenteseaux third, Loginov fourth, Heerema fifth and Brennecke sixth.

Overnight leader Pedro Andrade seemed to be slightly off the pace, but unbeknown to his fellow competitors, for the second time in the series he was suffering major gear failure which would almost force him to pull out. Andrade takes up the story “We had a good start and we had good speed, but all of a sudden we realised that our [electric] pumps weren’t working, and we were just about to sink. At one point we thought about getting the buckets and furling the jib because the water was above the floor boards and the boat was so heavy I was struggling to steer. We tacked onto port in the hope that the pumps would like that better, but they didn’t and then I was just trying to find lanes where no one would lee bow us or roll us. All three of us had to pump the boat upwind and we were exhausted and dropped back, but on the final beat I just thought to myself that I have to pull myself together and start sailing a bit and performing, and we managed to get a few shifts. There were a lot of big shifts on the last beat and we had two or three good shifts and we had a nice lane and we managed to get back into the top ten, then we passed Dmitry [Samokhin] and we almost got Gavia [Wilkinson-Cox] too, but we were very happy to finish ninth.”

The sheer gutsy determination of Andrade and his crew of Christian Giannini and Joao Vidinha enabled them to retain their overall lead in the regatta by four points. Behind them Pieter Heerema and Dmitry Samokhin both count 24 points while Anatoly Loginov is four further points back in fourth. Peter Gilmour’s second place moves him back up the leader board by three places into fifth, fourteen points adrift of the lead, while Braslavets' win moves him up three places into tenth overall. Andrade is now the only sailor with an all top ten score card, but with no discard and two further races still to sail the championship remains wide open.

The top performing Corinthian Team of the day was Germany’s Philip Dohse, crewed by wife Nicola, daughter Pia and Volker Kramer. Sweden’s Martin Pålsson, crewed by Peter Lindh and Thomas Wallenfeld, was the second Corinthian team home, despite the fact that Martin had received a nasty bump on the nose yesterday and was sporting an impressive nose dressing. After racing he wryly joked “I banged my nose on the mainsheet rather badly and saw the doctor after racing. She kindly dressed it for me and put a protective cover on it and told me that I must keep it dry and stay out of the sun for the next several weeks. I of course reassured her that I would do this!”. Denmark’s Poul-Richard Hoj-Jensen and old friends Chris Brittain and Hamish McKay took third place in the Corinthian race and continue to lead the Corinthian Division overall from Pålsson with the father and sons Bakker family of Jan, Oliver and Dominic in third.

Gavia Wilkinson-Cox is one of four ladies helming this week and her eighth place today means that she is now also the leading lady. Indeed, the competition between the ladies is proving to be exceptionally close with Gavia in 20th overall, Charlotte ten Wolde of the Netherlands in 21st and Nicola Friesen of Germany in 22nd. Finland’s Sarah Antila is sailing in her first major International Dragon event this week and trails the more experienced ladies a little, but she’s getting to grips with the big fleet and huge race courses and is currently lying in a very creditable 43rd. With two more races to go no doubt we can look forward a great fight for the honour of finishing top lady at the event.

There are two further days and two more races yo go before the regatta will be completed. The forecast for day five is for more rain and very strong winds so everyone will be closely watching the updates and keeping fingers and toes crossed that conditions are sailable. The regatta concludes on Friday 14 June.