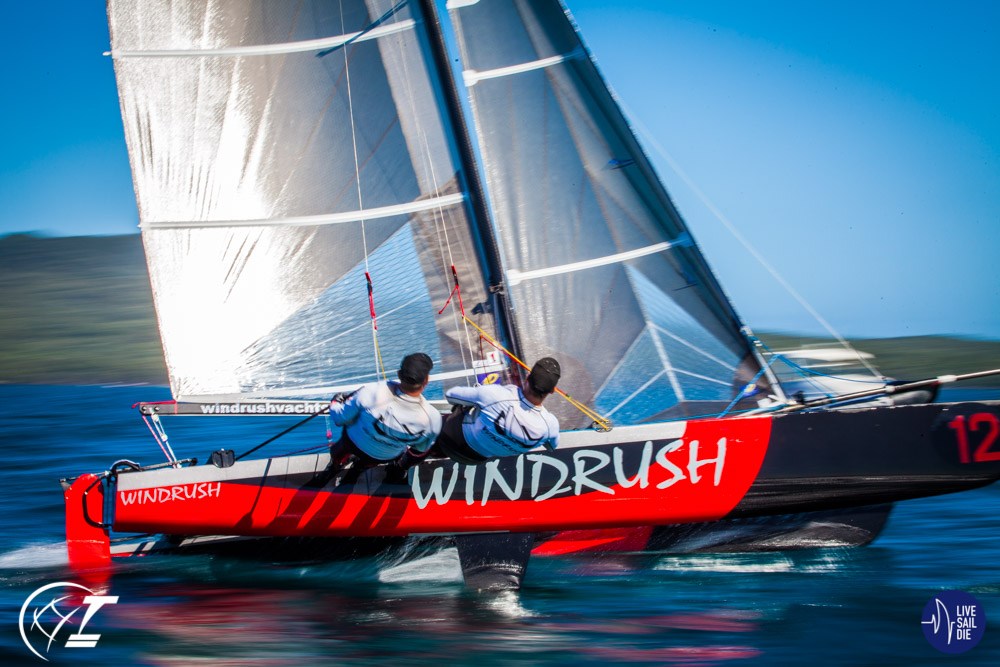 The results are as shifty as the conditions that the 23 catamarans racing in the 2019 Tornado World Championships are receiving on the race course.

Race 3 saw a mix of conditions with Brett Burvill (AUS) saying he and his crew, Max Puttman (AUS) saw everything from 6 knots to 18 knots from the south west.

“Very shifty conditions and more up and down in the pressure. You had to be really on it. We felt really out of phase on the downwind, but upwind was ok,” said Burvill.

“It’s so shifty, you only need to get one leg wrong and you’re fighting for your life. It feels good but it’s a long way from being over,” said Puttman after their Tornado was first over the line for the third consecutive time.

Rex Sellars, who won the Tornado Gold at the 1984 Olympics and Silver in 1988 is racing this world championship with his son, Brett. The father and son team are having a great time with Sellars junior joking that he was giving his famous father tips on the water.

“He knows what to do, he’s just gotta remember!” laughed Brett.

However the duo had a frustrating day after being forced to retire from Race 3 after damage to their traveller system. They returned to shore at Takapuna Beach, made a quick repair and were out again for the fourth race.

Race 4 saw a slight shift in the course which went from 225 to 210 for the final race of the day. Race Officer Megan Kenginston was happy with how the first race went, and was ready to take on the next one.

Burvill and Puttman showed their grunt yet again and after a good tussle with the Swiss sailors Jörg Steiner and Michael Gloor, they took out their fourth race of the championship. However after returning to shore, they were issued with a protest notice, and subsequently were disqualified from the race.

After slogging it around the course, Sellars and Sellars managed to finish third with a slightly repaired traveller, however when they headed back to the beach, and looked at the results, the letters OCS were against their name for that race. A tough day in the office.

“It’s all pat of the game,” said Rex. “The most enjoyable part of this regatta is sailing with my son, everything else is a bonus.”

This put Steiner and Gloor at the top of the leaderboard after four races. If the championship was to end now, the Swiss would be on top, with four races constituting a series. However there are two more races scheduled for Monday 7 January with similar conditions the fleet received today, and once the fifth race is completed, the drop comes into play.

Julian Tankard and Simon Cook (NZL) had a great race finishing 2nd after the DSQ to Burvill and Puttman with Aussie husband and wife team Jared Elyes and Suzanne Elyes in third.