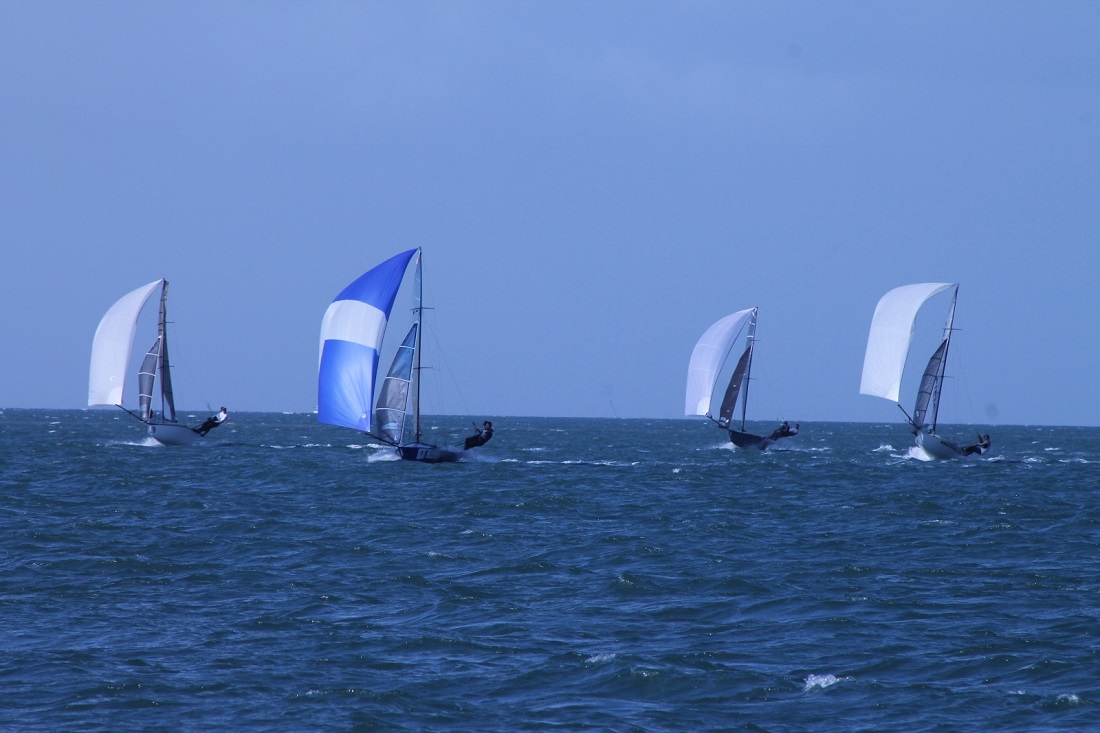 Brett Hobson/Jeremy Jones (Geotherm) were lucky to take Race 2 from Nick Press/Andrew Hay (Sydney Sailmakers) at the Your Move Conveyancing 12ft Skiff Interdominion hosted by the Sydney Flying Squadron this afternoon, while the latter pair repaid the favour by cleanly taking out Race 3.

A grey overcast Day 2 with breeze a little light on greeted the 35 crews representing NSW, Queensland and New Zealand in the 59th running of the event. Initially the breeze was from the south, but by the time Race 3 came around, it had veered to the south-east, averaging around 12-14 knots throughout the afternoon.

“We won the first race, but Nick (Sydney Sailmakers) was unlucky not to win it,” Geotherm’s skipper Brett Hobson admitted.

While Sydney Sailmakers was predominantly in first place all race and Geotherm in second, the Icarus crew of Andrew and Will Chapman had third placed nailed. “They did pretty well, did a good job” Hobson said.

There was no mistaking Sydney Sailmakers’ Race 3 win. They won by more than three minutes, with the Brad Phillips/Harry Bethwaite crewed Terms & Conditions second and Geotherm third.

“We had another bad start – back in the second row,” confessed Hobson, who is typically a crack starter. “The breeze shifted to the left and we got knocked and struggled to get across the start.”

The breeze was patchy and gusty throughout and while Sydney Sailmakers shot through to win, Geotherm was back in fifth and sixth for a fair part of the race.

“There was a lot of chopping and changing among the boats all through the race and we ended up third,” the Killara sailor said.

The Chapmans had been in third place, but were swallowed up and finished sixth, beaten by Chris Skinner/Chris Holland on Jackson Electrical (NZL) and Southport Sails (Murray Press/Scott Lanham) in what was a very close race behind Press/Hay.

“It was a bit of a lottery a lot of the time due to the conditions, especially in first race as breeze was trying to go south-east,” explained Hobson, who after three races leads the series on countback to Press/Hay who are sure to put the pressure on for the rest of the series.

Making a return to the 12s with ‘Dignity’, Cam and Charlie Gundy have come fresh from racing on separate yachts in the Rolex Sydney Hobart and won today’s Race 2 on handicap. The 21 and 20 year-olds respectively don’t usually sail together, so it was a great result.

“We normally race against each other – I was on Patrice in the Hobart and Cam was on Kayamai – it was hard work but a lot of fun,” he said. “Today was our fourth day together in the 12, so it was good to get a win. We used to sail them, but it’s been a long time,” said Charlie, who is crews on the skiff, while Cam helms.

“We had a solid start, kept the boat upright and stayed in pressure. There’s some very good competition here – you can’t make any mistakes – one bad tack and you lose places – it’s very tight racing,” he said.

The 20 year-old is praying for more wind during the week, “Because it’s (Dignity) a heavy old boat – older than me. Sadly, the weather is looking even lighter on Tuesday… We also have to keep the boat in one piece to finish.”

Tomorrow is a lay day, with racing in the Your Move Conveyancing 12ft Skiff Interdominion continuing on Tuesday from 2.30pm, with two races planned.

A spectator ferry will follow the final day of racing – 12th January. Tickets for the ferry can be purchased via the Sydney Flying Squadron website: www.sydneyflyingsquadron.com.au The ferry will depart the wharf at the club at 2pm. Drinks can be purchase on board. We recommend having lunch at the club (restaurant or cafe) prior to heading out on the ferry.