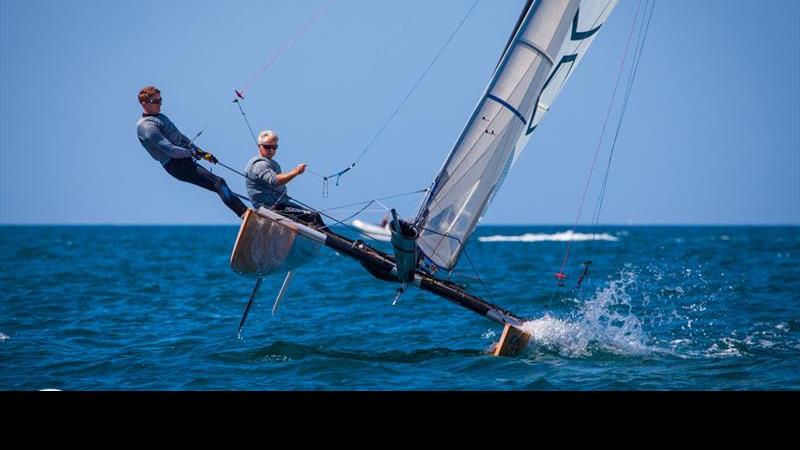 Day 2 at the Tornado World's

The Australian crew of Brett Burvill and Matt Putman won both races to take an early lead from Rex and Brett Sellers (NZL). in the 2019 Tornado World Championship, being sailed from Takapuna Beach, New Zealand,

The World's kicked off in frustrating conditions in the race area better know as Race Course A of the 36th America’s Cup, as the 23 boats launched from Takapuna Beach and made their way out to the start line in a light 3-5 knot northerly.

Race 1 was scheduled to start at 1300 hours, but with the fleet struggling to make it out on time, and the oscillating breeze preventing a course from being laid, the AP was flown to signal the start of a long wait.

Eventually the race was sailed in a 3-6 knot northerly breeze off Takapuna Beach in New Zealand, which died and gave way to a south-westerly breeze, providing good racing.

For the majority of the race a 6 knot northerly prevailed, but with just one and half legs to go, the westerly came in, completely changing the dynamics of the race.

Brett Burvill and Matt Puttman from Australia fought their way around the course, and eventually came out on top to take the first win of the Championship.

In Race 2 there was more consistency with the breeze, and after a quick course change, the fleet was on their way in an 8-10 knot south westerly.

Burvill/Pittman were at the pointy end of the fleet again, this time hustling with Jorg Steiner and Michael Gloor from Switzerland. But the Aussies were too strong, and backed up their Race 1 win with a second gun for the day. Rex and Brett Sellers were third again.