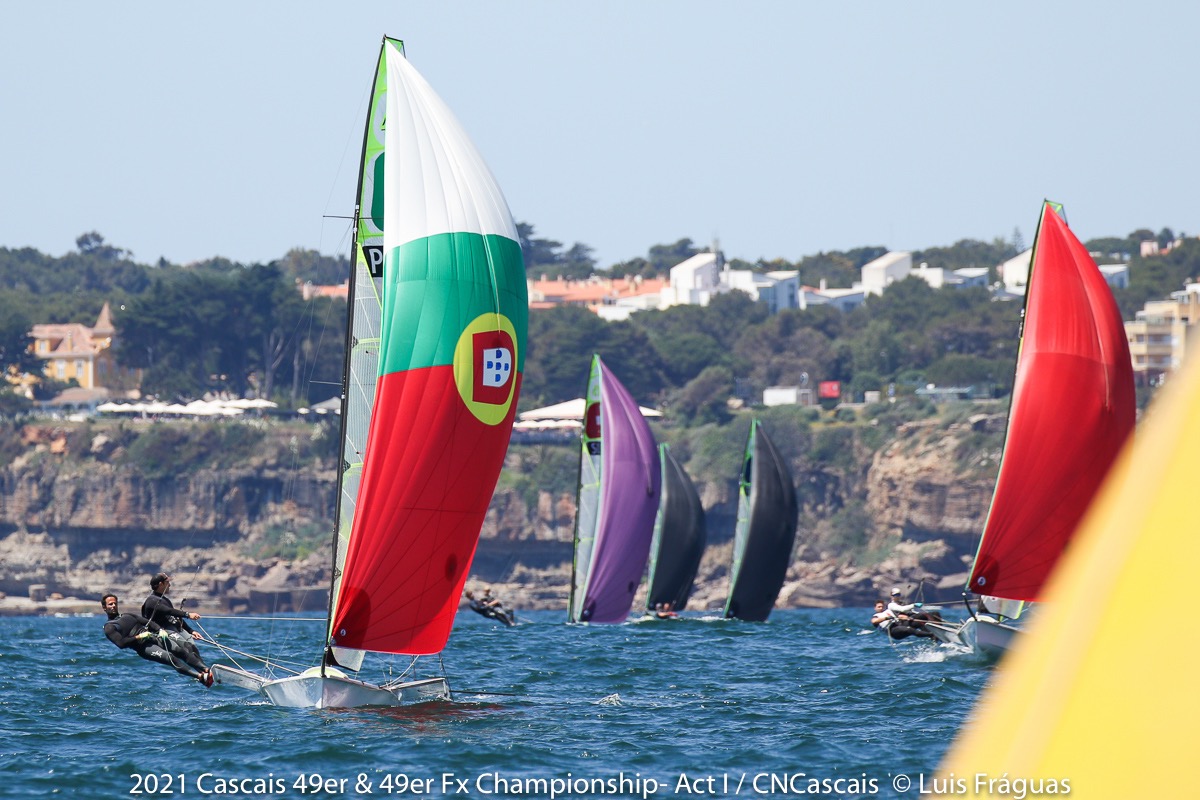 On the fifth and penultimate day of the 2021 Cascais 49er and 49erFX Championships, the 49ers sailed their three scheduled races, but the light wind on the bay of Cascais fizzled during the 49FX first race of the day, and this is how the top ten in each class were decided for the double-points Medal Race to be held today (Sunday) local time.

An 8-10 knot westerly threw some variety in today, and the Men’s fleet was away after 12:30pm, local time.

Nevin Snow/Dane Wilson (USA) continue their lead of yesterday, a clear 14 points ahead of yesterday’s second placed Robert Dickson/Sean Waooilove (IRE). Just one point separates the pair from Marco Grael/Gabriel Borges who retain third place. The Medal Race will be interesting. However, there were some new faces among the race winners today.

A highlight of the day was the home team of Jorge Lima/Jose Costa whose second, third and a bullet lifted them to fifth overall and qualified them for the Olympic Games in Tokyo. Unfortunately, due to four earlier DNC’s, it is mathematically impossible for them to podium.

49erFX
While there are just 11 teams competing in the Men’s 49er, there are 29 teams in the Women’s 49erFX, so it was disappointing that only one race could be held with so many vying for the Championship and Olympic qualification.

The fleet started in a consistent west wind that faded over the course of the race, with the ladies finishing the race in 6 knots. The organisers tried finding breeze on other parts of the Cascais Bay, but unfortunately there was not enough to conduct further racing.

Still, the podium underwent some changes. Leading the pointscore and clear favourites to win are the 2020 world champions, Tamara Echegoyen and Paula Barcelo. The are 13 points ahead of second placed Tina Lutz/Susann Beucke (GER). In third place is Annemiek Bekkering/Annette Duetz (NED) after finishing the race in fifth place. This result by the Dutch leaves them in an excellent position to attack the second placed Germans.

The teams from the Netherlands and Germany should not underestimate fourth placed Ida Nielsen/Marie Olsen (DEN), from Denmark, who are just three points behind them.

Winners of the only race of the day were Martine Grael and Kahena Kunze (BRA). The bullet moved them up to fifth place and the two must be pleased, as they are still adapting to their new boat, christened ‘Samba’ in Cascais less than a week ago and are in a position to nab the silver medal.

The Australian team of Tess Lloyd and Jaime Ryan are in 18th overall, so have not made the cut for the Medal Race.

Today the Medal Race for each class will be umpired in a stadium format within Cascais bay.

This championship has the support of Turismo de Portugal, Visit Cascais, Cascais Town Hall, Portuguese Sailing Federation, Cascais Marina and Vista Alegre. We also have the institutional support of the non-governmental association Sailors for the Sea – Portugal
Results: http://www.cncascais.com/index.php?option=com_rib&view=item&id=1267&catid=2&Itemid=157&lang=pt#results