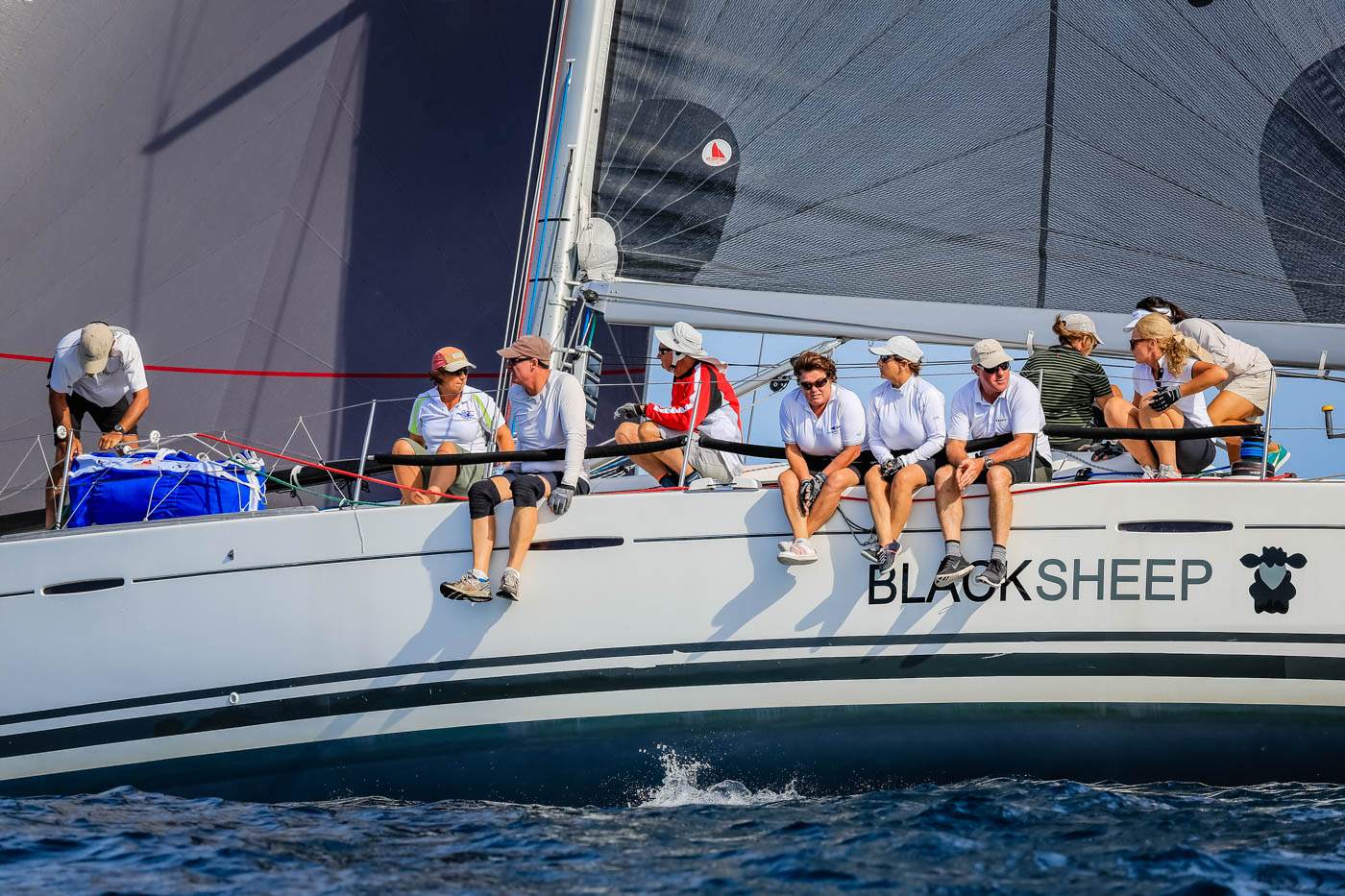 The ninth Sail Port Stephens finished yesterday, Sunday April 17, in some of the best winds of the week-long regatta and close to 100 crews luckily escaped the powerful thunderstorms that stalled a few miles to the south of the competition arenas.

From the forecast, Sunday started out as a race against the clock to get the schedule completed before the change unleashed, but amazingly the approaching dark clouds and rumbling thunder stopped short, allowing crews to close out their final inshore passage race and offshore windward/leewards in mainly dry conditions.

In cooler southerlies, 12-13 knots, the Performance Cruising division 1 and Performance Racing fleets tussled for last points on an inshore passage race course, both divisions finishing snugly at the top.

“This is the first regatta I’ve flown a spinnaker in four years; when we entered Performance Racing we thought it would be non-spinnaker division…ooops,” Short said with a grin prior to the final trophy presentation for all Pantaenius Port Stephens Trophy prize-winners.

“The incentive created by the beautiful Port Stephens scenery was a contributing factor plus today we had two locals on board and they were helpful keeping the boat in favourable current,” Short added.

In Greg Elliott’s words, he and wife Jo drag their home around the track. The couple left New Zealand a couple of years ago to cruise and enter regattas with the fibreglass production boat Greg designed. “It was an idea I had, to go back to the places I’ve raced at and past but never been able to cruise around and get to know,” he said.

“I think Port Stephens is fantastic; it’s a magic spot. We are heading north again, back to the Whitsundays and definitely we’d like to do the Hamilton Island series again. This regatta to me feels like it’s based on that series with nice touches like the free sausages put on the other night [by Pantaenius].”

Third in division 1 by two points off the tied first and second placed boats was Michael Kirby’s local Nsx38 She’s the One (PSYC).

An average age of 60-something only helped Barry Jackson and his Beneteau First 40 crew on Alibi (Royal Prince Alfred Yacht Club) achieve the division win, their best result in six Sail Port Stephens.

“The weather suited us, light to medium winds and we enjoyed the courses,” Jackson said. “We had very good competition in our division and win, lose or draw, the sportsmanship in our fleet was great.”

Alibi’s last time at Sail Port Stephens was two years ago and they lost the series by one point. This time they beat Peter Mayo’s Sydney 38 Austral from Lake Macquarie by a single point. Third was another Lake sailor and SPS keen supporter, Len Payne and his Lidgard 10.6 Kerinda.

The Hicko Shield – Spirit of Port Stephens trophy, awarded annually by organiser Corlette Point Sailing Club to the crew who embody the regatta spirit of fun and fair competition went to Derek Sheppard (Black Sheep). Sheppard is a Sail Port Stephens ‘lifer’ having competed at all nine, plus three of the late Roger Hickman’s (Hicko) crew helped put Black Sheep through its paces during the Commodore’s Cup and second part Port Stephens Trophy.

The Beneteau 45 also flew Wild Rose’s flag during the series, a poignant reminder of Hicko’s champion Farr 43 and the outstanding yachtsman, a friend to so many in the sailing community who died from a brain tumour in March.

“These regattas tend to go well if the weather behaves and we had good wind and great weather all week, even on the final day when we could see things turning pear-shaped just to the south.  For a small club and community, Corlette Point Sailing Club put on a great event, they really work hard. We hope to see as many competitors and class fleets as possible for next year’s anniversary event.”

Next year marks the 10th anniversary regatta of the event, April 17 – 23, 2017 and organisers are already making plans to commemorate the milestone.