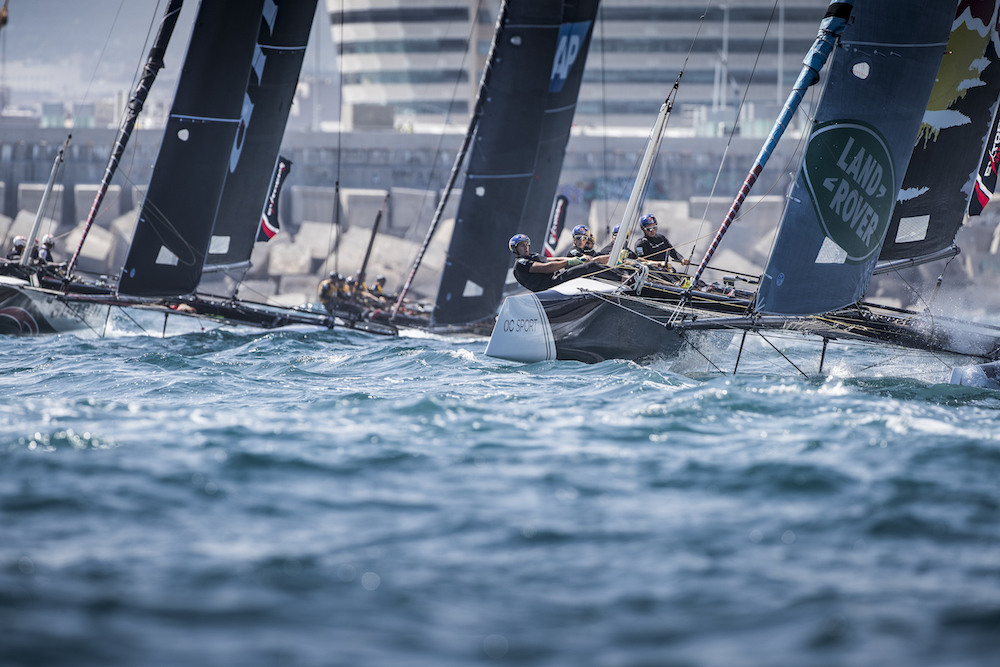 The penultimate day of Act 3, Barcelona, had fans glued to the racing as two of the event’s main contenders made contact on the course.

Speeding towards the windward mark on opposing tacks, the Omani team and Red Bull Sailing Team came together during the fifth race of the day.

Racing at full pelt, Red Bull Sailing Team tried to manoeuvre behind the Omani boat but failed to clear their competitor.

No injuries were sustained, but the Omani team returned to shore to effect repairs on their boat ahead of tomorrow’s racing.

Pete Greenhalgh, mainsail trimmer for the team, explained the events on the water.

“It was quite a tight cross,” he said, referring to Red Bull Sailing Team’s manoeuvre. “They went behind us and unfortunately we made contact. It has caused a bit of damage and stopped us racing for the rest of the day.

“Hopefully it’s a minor setback and we will be racing on full form tomorrow,” he continued.

Red Bull Sailing Team were able to continue racing but will be working hard tonight to ensure their boat is back to its prime for tomorrow.

“We have a long night ahead of us,” said the team’s Sport Director, Hans Peter Steinacher. “The race times are scheduled so we must be on that starting line for two o’clock. We will do everything we can; we have a lot of power here, we will fix the boat.”

The Omani team was awarded redress and average points for the races they missed (18 to 20), equal to that of average points achieved in the previous eight races. Red Bull Sailing Team was disqualified from Race 18, resulting in a tie in points between the two teams.

British-flagged INEOS Rebels UK had their best day of the Act so far, scoring a string of six podium finishes over the course of the day’s seven races. Skipper Will Alloway was pleased with his team’s consistent sailing.

“It was a really good day for us today,” he said with a smile. “We had an intense atmosphere on board; the lads did a really good job. There’s some big competition here, we’re learning from them and implementing that into our own sailing strategy.”

Despite their strong results, the Brits were no match for the Swiss and the Danes. Alinghi and SAP Extreme Sailing Team sailed faultlessly throughout the day, reconvening their battle for the top spot that ensued in Act 1, Muscat.

A competitive Rasmus Køstner, skipper of SAP Extreme Sailing Team, was pleased to take on rivals Alinghi in their push for the podium.

“It’s pretty tight with Alinghi. Both our teams won a few races – they’re definitely a good team to compete against.”

Over on the Flying Phantom racecourse, Team France Jeune extended their lead over the fleet. The talented pair clocked wins in every single race of the day, placing them 11 points ahead of second place Idreva Zephyr Foiling.

Racing will resume tomorrow at 12:15 CEST for the Flying Phantom fleet, and 14:00 for the GC32s. GC32 racing will be streamed LIVE on the Extreme Sailing Series Facebook and YouTube. With the final race of the Act counting for double points, yet another action-packed day is expected.