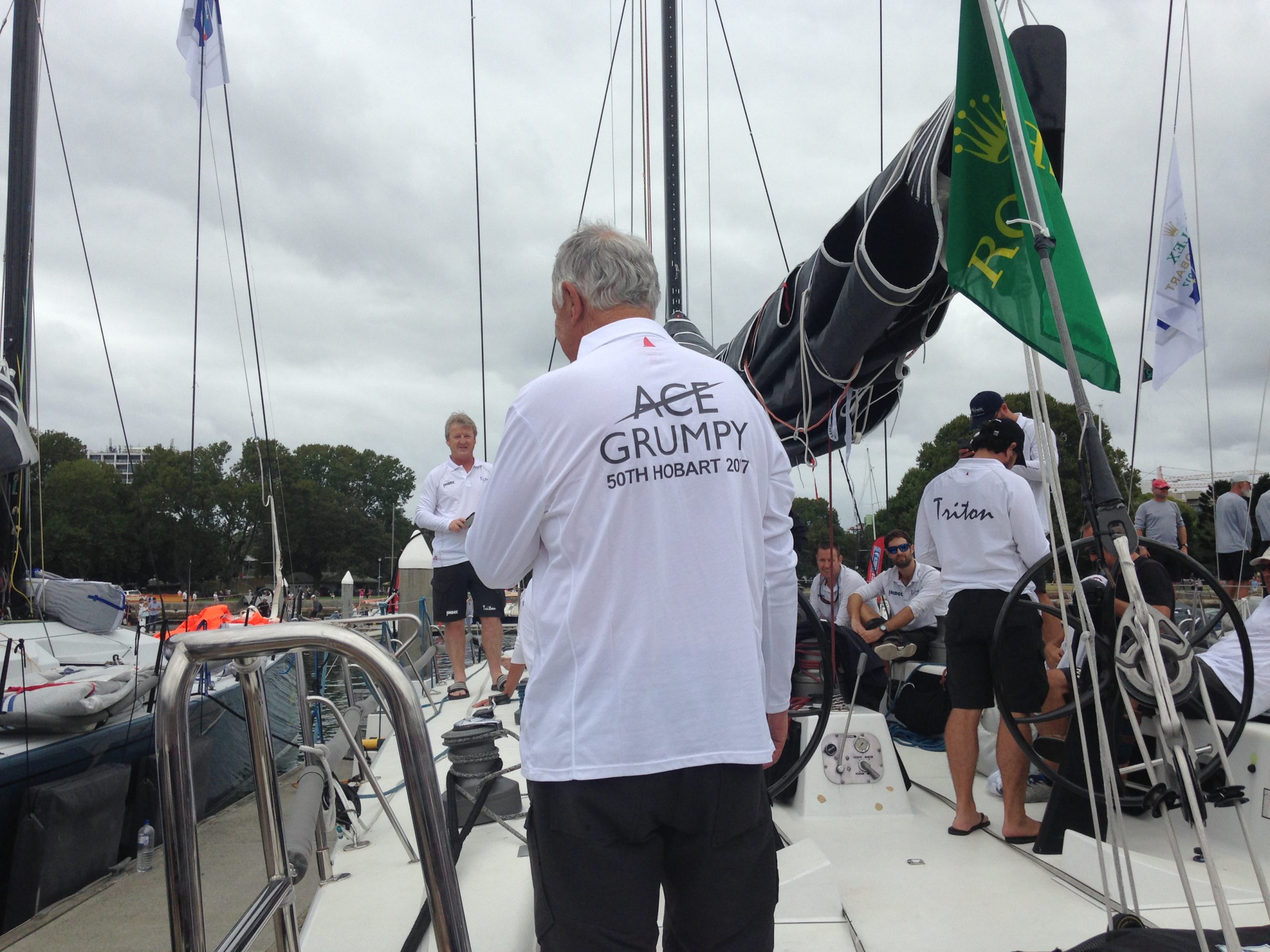 When David Gotze/Michael Cranitch’s Triton docked in Hobart on finishing the 2017 Rolex Sydney Hobart, Tony ‘Ace’ or ‘Grumpy’ Ellis became only the second person to sail 50 of the Cruising Yacht Club of Australia’s race – only Tony Cable had gone then before him.

And yesterday, Ellis came face to face with Bill Ratcliff, who at 81 had just ticked off his 49th –and hopes to be standing in Ellis’ and Cable’s shoes next year.

Ellis is taking it in his stride – he doesn’t get all the fuss. He has been sailing at an international level for far too long – America’s, Admiral’s and Clipper Cups. He’s done it all, including the 50 Hobarts.

The Sydneysider explains the memorable part of the 2017 race. “A fantastic owner who was prepared to put it all on the line, upgrading the boat and putting on new sails. Jacko (old mate Jack Goluzd) Gotzey (Gotze) and myself were very hard on putting together a very, very good crew. It was one of the happiest and most go-fast orientated crews I’ve been lucky enough to sail with.

“From our point of view on Triton, we didn’t want a sleigh ride, but you have to go with what you’re given. We’ve got a boat that is a good all-rounder, great upwind and good in up to 18-20 knots downwind.

“With the TP52s and so on, skiffs on steroids, we don’t have any answers for them in a sleigh ride and it’s very obvious, although we had a great race down the river with Koa. We’d run out of breeze, she’d run out of breeze. The front was coming down and she’d hit it like a twin turbo racing car when a gust hit. But upwind, now Triton has been reconfigured by Andy Dovell, we had it. It’s a really good boat.”

Ellis has a fund of stories it would take a book to cover it. Now 73, still going strong because of the respect others have for him and his ability, Ellis did 41 of his Sydney Hobarts with the legendary Syd Fischer, so naturally many of those memorable moments involved Fischer and his so many Ragamuffins .

“Syd had a tremendous determination and that first Ragamuffin – Graham Newlands put together with me and Doug Paterson – had Sparkman &Stephens scratching their head at how it was so fast (the S&S 1968 launched wooden boat finished third overall in the Hobart that year).

“And that was where the nucleus of the Ragamuffin crews came from. Syd had a dynamite of a boat along with a great crew and Joey Pearce – our sailmaker – he was making sails for all the America’s Cup boats. He was considered the best in the world.

“In that first race, coming up Storm Bay, it was blowing dogs off chains and one of the cap shroud wires was unravelling. We were watching that carefully. It was snowing on Mount Robinson (in south-west Tasmania). If anyone had told me then I’d end up coming here 50 times, I would have told them they were mad.”

Ellis says there were so many extraordinary races – some with so many patches of no wind, others hard on the nose slogs. “But there have only been three sleigh rides in the entire time, 1975, 1999 and this year.

“We did the ’93 race on Syd’s Farr 50. It was harder than 98, it was relentless, storm trysail and storm jib the whole way. We were probably 100 miles off east Flinders Island, the hull was stressing so much, water was weeping through the hull itself.

“We fell off one very big wave. Down below we were memorably airborne for ages. We tacked the boat, looked, and we’d lost the hull’s carbon skin. We didn’t even consult with Syd, we told the steerer, Ian McDonald, to pull away and start going north.”  They retired.

Ellis said of course the tragic 1998 race was unforgettable. It was an extremely good boat (Farr 50 new hull with Will’s deck – sold and raced this year as Sail DNA). “That was James Spithill’s first Hobart – he said he wouldn’t do it again – and he didn’t for a while. Grant Simmer was aboard too.

“We decided we couldn’t turn around, it was unsafe. I said, ‘we’re going to Tasmania whether you like it or not’. We made it that year (they finished third overall). We stripped everything off the deck and stowed it below – the conditions were so bad.  There were four on deck at a time sailing the boat and everyone else was below.

“I’ll never forget an article Alan Payne wrote about rogue waves that come through every 20 minutes or so – a pattern. Well, that’s what we copped, and some of the waves, you could see through the top 20 feet of them, they were like a sheet of glass. I was lookout for the helmsmen. We got through it without any breakages at all.

“The biggest thing we didn’t have happen was steering failure. Without being able to duck and weave through the seas, and ease the boat through the waves, if that ability had been taken away from us, we would have been in all sorts of trouble.”

The Sydney yachtsman says 1975 was easiest race – it was the year Kim Kilroy broke the race record with Kialoa III and held it for 21 years.

“I was on Ballyhoo (Jack Rooklyn’s maxi) and we reached out of the Harbour and down the coast with what would be a Code Zero today. We put a spinnaker on at Kiama and it got fresher and fresher and squarer and squarer. Finally we got to Tasman Island where we gybed, reached up Storm Bay and the Derwent to finish in a fairly light northerly. The only part of me that got wet that trip was my shoes off Tasman Island.

‘Grumpy’ recounts the funny races – one special was an incident on Syd’s maxi Ragamuffin in 1988 – the first of two line honours victories with the German Frers designed maxi.

“We used a caterer/cook who said he could do the job. The first night out, the oven caught fire. He’d put the food, cardboard cartons and all, into the oven.

Fischer adds: “On the last night, the food had soaked through, because he didn’t put dry ice the ice chest, so it’d all gone to water.

“Syd said to me before the race, ‘I own a bloody hotel and the idiot’s gone to a provedore for the food’. We called the guy Pinky because he dyed his hair pink once. He was a character – always doing stupid stuff – he tried to book into the Sheraton in Syd’s name once,” Ellis recalled.

Fischer says, “He was a case. “We took his ashes in a box to a dance at the Mosman Rowers one night and gave it to the girls so they could have a dance with him.”

Ellis: “Hank (yachtsman Henry Paterson) went with Pinky’s parents to scatter his ashes at sea, but the ashes wouldn’t come out of the bag and Hank said: ‘Pinky, you never did know when to leave’.”

With the sea entrenched in his blood, Ellis says, “I’m already committed to going to Hobart next year. Gotzey said ‘well your coming next year aren’t you,’ and I said, yes, I guess.”

On the attraction of the Rolex Sydney Hobart, Ellis muses: “It’s a whole heap of things, from being a race that you can never predict what the weather will be to arriving in Hobart. What a reception – it’s one of the best places in the world to finish a race. The Tasmanians never lose their enthusiasm for the race – and they continue to tolerate us,” he ends.