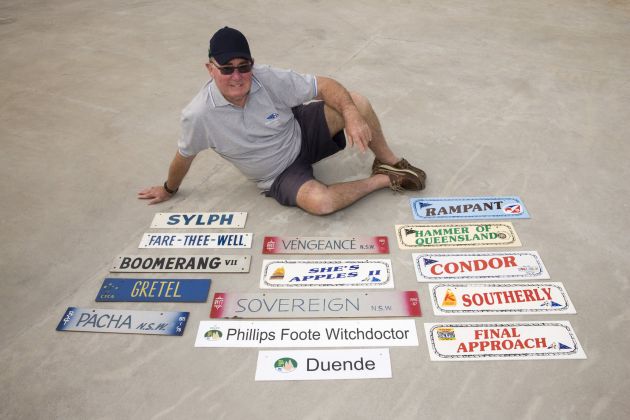 Tony Cable and skite plates from many of his 49 races. Photo Andrea Francolini

On Boxing Day a bloke by the name of Tony Cable will start his 50th Hobart – nobody has ever done that before.  It is a landmark for the Rolex Sydney Hobart; another colour to add to the tapestry of this extraordinary event that, like the Boxing Day Test, is as much about Australian culture as Australian sport.

And no, Tony Cable isn’t the owner of a famous yacht, nor is he a globetrotting sailing superstar, flitting from regatta to regatta.  Glark (think Clark Gable), as they call him, is just a guy who loves ocean racing.  He is a crew member, one of the hundreds, no thousands, who have been the engine room of this great race for 70 years.

Crews don’t get their berths by right of wallet or lineage, they are there because an owner reckons they are good enough, and bring enough to the boat to help it win. Hobart boats don’t take passengers; Tony Cable has been good enough, has earned his place, for 50 years.

The Sydney yachtsman has sailed with an astonishing 306 fellow crew.  No wonder he can’t go unnoticed at the Cruising Yacht Club of Australia, which organises the race.

“The other day I was walking through the club and ran into this big, swarthy bloke, Black Joe.  Sailed with him 25 years ago. We chatted away.  If you meet up with someone you sailed with, it brings back wonderful memories.”

Cable has watched the face of Australian ocean racing change: grow up really. Once it was all blokes and booze, with the occasional girlfriend or wife reluctantly included. Now women crew are commonplace. Here is that rare sport where men and women can compete side by side.

He has sailed with many of them: will race to Hobart this year with two women in the crew of Duende. And after all these years, he seems to have concluded that there is, indeed a difference between men and women sailors.

“I just think that, typically, women are better than the average young fellow starting out. Maybe it’s because they’ve had to be more determined to get the ride in the first place, but every one of the women I have sailed with has been above average, more resilient. Some guys ask if women are strong enough, but it doesn’t come into it at all. They are just very good sailors.”

This will be Cable’s 5th trip to Hobart and his fifth on Damien Parkes’ Judel/Vrolijk 52, Duende.

“Duende is 52 feet, so she’s got enough speed to give us a respectable trip to Hobart. Three days, not five or six,” Cable says. “Not too long, but not too short either. The maxis do it in a day and a half.  Why would you want to do a Hobart in one and a half days?”

Cable and Parkes have done more than a dozen Hobarts together on various boats, and Cable is mates with the core of the Duende crew. There will be some new faces, Hobart novices, because along with experience and brains, an ocean racing yacht needs a certain amount of brawn and, when someone has to go aloft. That wonderful certainty of immortality is the province of the young.

“But the way Damien finds them; they all seem to come off the same shelf. Nice guys,” Cable says.  “They’ll work out okay.”

The lead-up to the race this year is following the regular pattern: “I start preparing for Hobart right after the end of the last one,” he says.  “Keeping my fitness up – you can’t just do it in the last month.

“I’m less inclined to sail every weekend these days. I’m a little bit over it after all these years, but a few weeks ago I joined Duende for some ocean races, the qualifying race, and to work on getting the boat ready.

“I always get a bit apprehensive pre-race, constantly looking at the weather, when we might get the southerly, because you always do. On Boxing Day I’m pretty keyed up, hoping we won’t break anything that might stop us from getting to Hobart, but once you start you become too busy to think about it anymore,” he says.

An early exit marked Tony’s first Hobart, back in 1961 on the 33-foot Tarni. A brand new mainsail roller-reefing fitting exploded as they sailed through the Heads. Race over; a terrible disappointment for the 19 year-old.

Glark made up for it though, in spades. Crewed on some of the great yachts of Sydney Hobart history: Pacha, Vengeance, Sovereign, including when she won both line honours and overall in 1987, Condor, Don Mickleborough’s beloved Southerly and with the Rum Consortium rascals aboard Witchdoctor.

Now everybody asks him, why do you keep doing it?  It drives him nuts.

Cable keeps doing it because he loves it. Duh. It is no hardship, no act of selfless generosity. “I really love going to Tasmania,” he says.  “I love the scene, the high jinks. You can have a good race and end up in Mooloolaba or the Gold Coast, and they’re nice enough, but there’s that special atmosphere in Hobart. I’m fit enough not to think I can’t do it anymore, so why stop?”

I guess the people who ask that question have in mind a quintessential Hobart race image: a yacht pounding into a vicious southerly, tons of white water cascading down the deck over a cold, soaked crew huddled on the rail.

Hidden inside that epic picture, some of the crew are toiling away in the forepeak, repacking heavy, wet sails, steaming in the fetid air, hanging onto anything, anything at all, as the hull twists and falls, climbs and falls again in the oncoming waves.

Cable won’t say he enjoys it, but he does admit that there is great satisfaction to be found in these dark and gloomy moments.  Head down, backside up, doing your job. He knows that when he was a kid these were the times the older heads would mark him, just like the kids who have signed on this year will be weighed in the balance next week.

But he’s also knows there is another quintessential Hobart image out there. A boat scudding across crystal seas under spinnaker, the crew sprawled aft soaking up the sun, the cliffs and verdant fields of the South Coast slipping by on the horizon.

“Nothing beats ocean sailing on a sunny day. That’s what keeps us going.

“You know you are going to get the harder stuff, but you know it will end and get nice again,” Cable finishes.