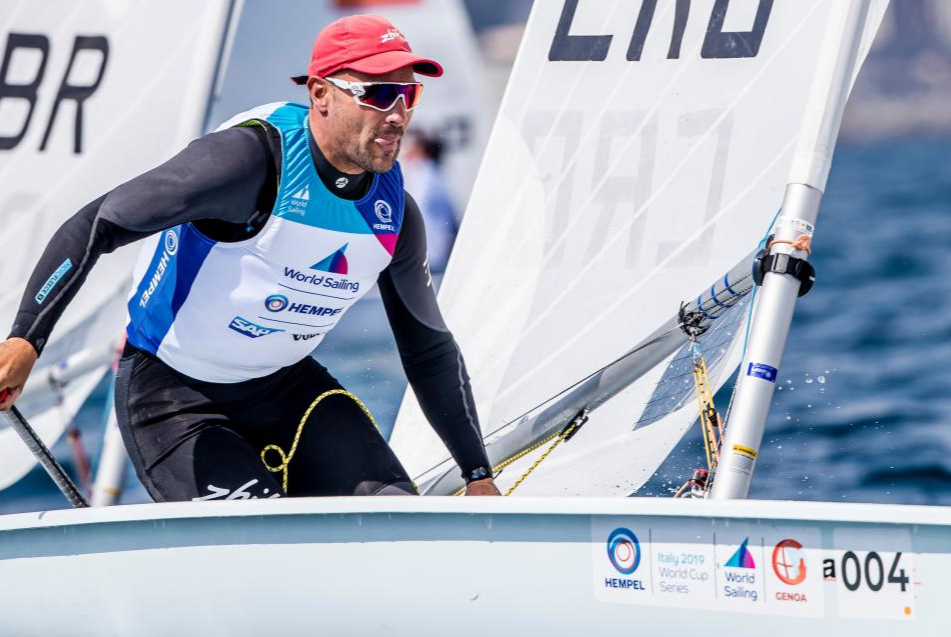 The Italian city was hit with a light 5-6 knot wind on the second day of competition which meant that the split Laser fleet could only complete one race apiece.

Across the eight Olympic events, that feature 676 registered sailors from 58 nations, only the 49erFX blue fleet were able to complete a race alongside the Lasers. Denmark’s Ida Marie Baad Nielsen and Marie Thusgaard Olsen claimed the victory. The result has not yet been applied to the overall leaderboard as the 49erFX yellow fleetneed to complete their third race of the series.

The Laser fleet got racing underway immediately in front of the venue, Fiera di Genova, at 14:18 local time after a long morning wait for wind.

Stipanovic, sailing in the blue fleet, took a convincing victory and was full of praise for the race officials ashore after racing, “Compared to events I’ve been to recently, we had a Race Officer who could understand what was happening to the wind. He was changing the course nearly on every leg and the mark was always in the right place. It was a pleasure to be a part of the regatta today.”

A Race Officer’s job in light winds can quite often be a challenge with many factors to take into consideration when delivering a race. The Race Officer leads a team on the committee boat and mark layers who are on the course. They have a complete overview of what is happening around the entire race course and call the shots when it comes to the length of the course, duration of the race and postponing when conditions are unfavourable.

“It’s a tough job,” continued Stipanovic. “Some Race Officers are always pushing and they don’t want to wait or cancel the race if it’s unfair conditions. It’s a hard job but I like it when the Race Officer can feel what is happening and makes the right decisions. I’m going home happy today because we always knew what was happening and he was not pushing. He waited for wind and we had a fair race.

“I’ve always said, if I’m leading the race and it’s not fair I would be more than happy for the Race Officer to cancel the race and win a fair one instead.”

Norway’s Tomasgaard also enjoyed the racing in the yellow fleet, snapping up the victory ahead of Sergey Komissarov (RUS) and Stefano Peschiera (PER). The Norwegian comes into Genoa off the back of an exceptional performance in Miami where he controlled the fleet and clinched gold with a day to spare.

He finished sixth at the recent Princesa Sofia Regatta in Palma, Mallorca and is aiming to recapture his Miami form.

“My starts were good in Miami but I had a tough time in Palma,” commented Tomasgaard. “They were not as good and today’s start was not perfect either. It’s difficult to say where it went wrong but if you’re a second late it can make a huge difference. I’ve not been as on it recently.

“Racing is the best practice for the start. Once you make the acceleration you’ve got to go for it and go full speed.”

Although he suffered a tough start, there was no issue with Tomasgaard’s performance throughout the rest of the race. He moved up from seventh at the first mark to clinch the victory. “In the beginning I thought I was going to get caught in the middle like you often do in light wind but the group of us found pressure and moved forward.”

After one race, Stipanovic and Tomasgaard share the lead and will be targeting a repeat performance on Wednesday.

Denmark’s Baad Nielsen and Olsen sealed the single 49erFX race in a 3-5 knot breeze. Sailing in the blue fleet, the Danes finished ahead of Italy’s Carlotta Omari and Matilda Distefano and Spain’s Tamara Echegoyen and Paul Barcelo Martin.

The yellow fleet were unable to race which means that the blue fleet race does not yet count. The result will come into play once the yellow fleet complete their third.

Competitors in the Men’s and Women’s 470, 49er, Finn and Nacra 17 remained ashore all day and did not race. The Laser Radial fleet briefly took to the water but conditions were not deemed appropriate.

Racing is scheduled to resume for the 49er, 49erFX, Laser and Nacra 17 at 11:00 on Wednesday 17 April. The remaining fleets all have an additional race scheduled as they aim to catch up on races missed on Tuesday.