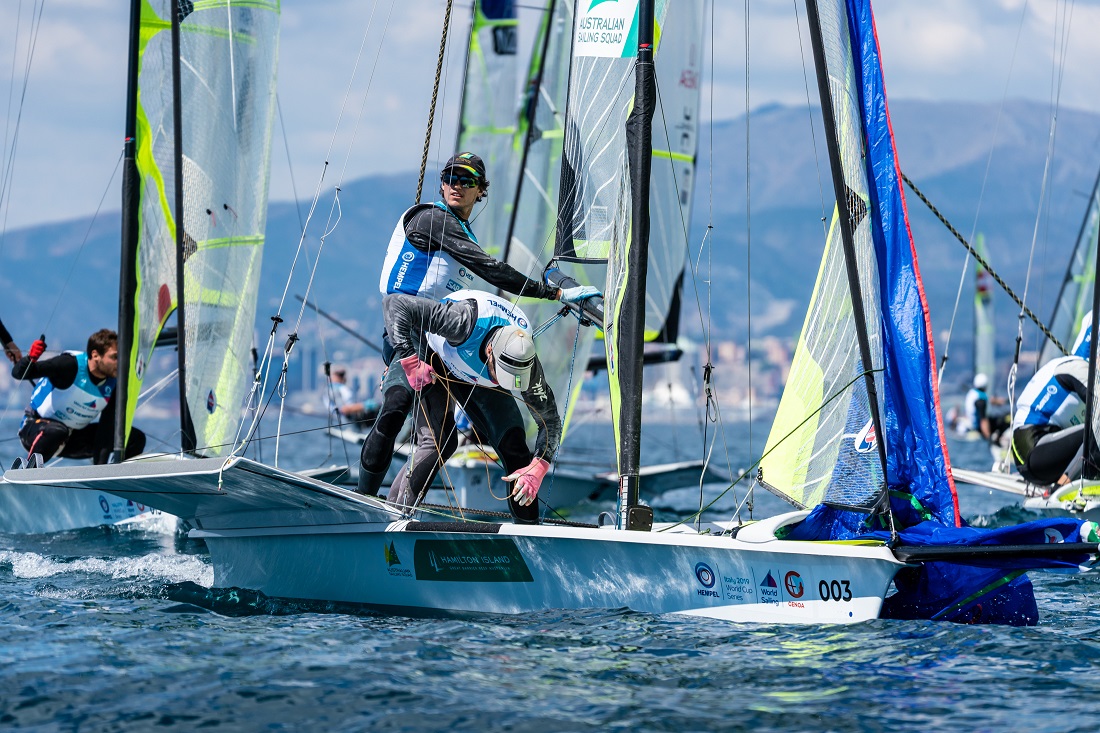 David and Lachy Gilmour in the thick of it - credit Beau Outteridge - Genoa World Cup.

West Australian brothers David and Lachy Gilmour got the Australian Sailing Team (AST) efforts off to a flying start at the Hempel World Cup Series – Round 3, Genoa being held from 15 to 21 April.

The Gilmours, one of four Australian teams competing in the 49er skiff, sailed to second and seventh places in the two races completed. They sit third overall behind Germany’s Tim Fischer/Fabian Graf and the New Zealand pair of Isaac McHardie/William McKenzie.

“We did the first race in an unstable and shifty offshore breeze,” Lachy said ashore. “It was up and down and died off to a very light breeze. The second race was more stable in direction and strength.

“We feel pretty good after today. We started well and are hoping to continue this form through the qualifying round. We are slowly working on things throughout our European season, which is in the early stages,” he said, admitting: “There are always things we need to be working on.”

Going back to the Princess Sofia Trophy, held in the first week of April, the Gilmours’ mixed results culminated in 23rd overall. “When we’re not on, it’s frustrating and we keep working on those things,” Lachy said.

Of the conditions, he commented, “We’re training in a lot of light breeze lately (Princess Sofia was mainly light), but we feel comfortable in all wind strengths.”

In the 49erFX it was a similar story. Amelia Stabback and Caitlin Elks are best placed in 34th overall after 11, 19 results. Tess Lloyd and Jaime Ryan scored 12, 22, while Natasha Bryant and Annie Wilmot finished with a pair of 19th places before racing was called to a halt for the day.

The 470 Men’s and Women’s competition will get underway from 2pm Tuesday local time.

Today marked the Opening Series at the Italian event. It was a long day’s work and a game of patience for all. Light breezes pervaded all course areas, causing delays and slow racing, the wind petering out to 3 knots for periods of time. By all accounts, more light weather is on the way for the next few days.

Originally, the ASTs Nacra 17 teams were to compete in Genoa, but a change of plan has them back in Australia for specialised training. Meanwhile, Finn coach Rafael Trujillo has Jake Lilley at a training regatta in Athens where all the big names will be, “Before we go to the European Championship, starting from 22 April,” Trujillo, said.

Laser coach, Michael Blackburn, has elected for a training camp in New Zealand for his charges before they compete at Hyeres from 27 April to 4 May, where the best Laser and Laser Radial sailors from around the world will compete.