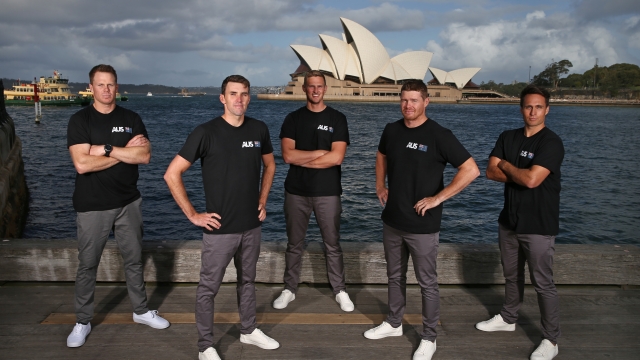 SYDNEY – Tom Slingsby – Olympic gold medalist, America’s Cup winner, eight-time world champion and member of the Order of Australia – was today tabbed to lead the Australia SailGP Team in the global racing league’s inaugural season. The full team was unveiled this morning on Sydney Harbour, which last week was announced as the first ever race venue (February 15-16, 2019) for the new racing league.

The Australian team features some of the nation’s most decorated sailors, including Olympians, Sydney to Hobart alumni and Australia’s most successful Ironman Ky Hurst. SailGP will give Slingsby and the Australian crew the first chance to represent their country in boats of this caliber. The identical wingsailed F50s are the fastest catamarans in the world, capable of reaching speeds exceeding 50 knots (60mph/100kph).

“I’m thrilled to have an Australian team, led by one of the country’s most successful sailors of all time, competing in our groundbreaking new global sailing league,” said SailGP CEO Sir Russell Coutts. “Australia has proven time and again that it knows how to put on a show for the world, and we couldn’t have asked for a more iconic and stunning backdrop to host the first ever SailGP race than Sydney Harbour.”

Spearheaded by Larry Ellison and Coutts, SailGP has set out to redefine sailing and will bring intensely competitive, inshore racing to fans in Sydney; San Francisco; New York; Cowes, U.K.; and Marseille, France, as world-class crews compete for the championship trophy and a US$1 million prize. Australia will take on teams from China, France, Great Britain, Japan and the United States.

“The opportunity to represent my country again is an extraordinary honour, and the chance to start this campaign on home waters – the best harbour in the world – is something that will make it even more special,” said Slingsby. “We’ve assembled not only what I believe is the top of Australian sailing talent, but a team that is 100 percent focused on making our country, our fans and our sponsors proud to be on the journey with us. I’ve seen how national team success can unite and inspire not only sailors but the broader public, and we now have a chance to deliver that.”

FOX SPORTS has signed a three-year agreement as SailGP’s Official Broadcast Partner in Australia, and will air each of the global races on the network, starting with the Sydney event live. SailGP is also working toward a partnership with a free-to-air network for additional coverage of the Sydney grand prix in the Australian market.

“FOX SPORTS is delighted to become the official Australian broadcaster of SailGP for the next three years starting with live coverage of the Sydney race in February 2019,” said head of FOX SPORTS Peter Campbell. “We look forward to following the exploits of the Australian SailGP Team led by Tom Slingsby, with FOX SPORTS bringing sailing fans all of the exciting on-water action from every race in the global league as it visits locations such as San Francisco, New York and Marseille.”

With a primary goal of growing global viewership and broadening its fanbase, SailGP and its television partners will focus on personality-driven broadcasts utilizing patented and leading-edge immersive media technologies.

The SailGP event in Sydney will take place in Sydney Harbour, east of the Harbour Bridge and Opera House. Shark Island will provide striking spectator viewing, with the event hub at Royal Sydney Yacht Squadron in the city’s north shore. The Friday and Saturday racing will feature vantage points from a variety of locations, both onshore and on the water.

“I’ve worked with The Loyal Foundation for many years and am excited to have them on board as the Australia SailGP Team official charity partner,” said Slingsby. “The work they do changes the lives of children across Australia and they give 100 cents of every dollar that is donated to the cause, so we’re proud to be working with them.”

Sanctioned by World Sailing, each SailGP grand prix event will consist of two competition days with five fleet races, culminating in a final match race between the two leaders. The final race in Marseille will feature a winner-takes-all, US$1 million championship match race between the season’s top two teams to conclude three days of racing.