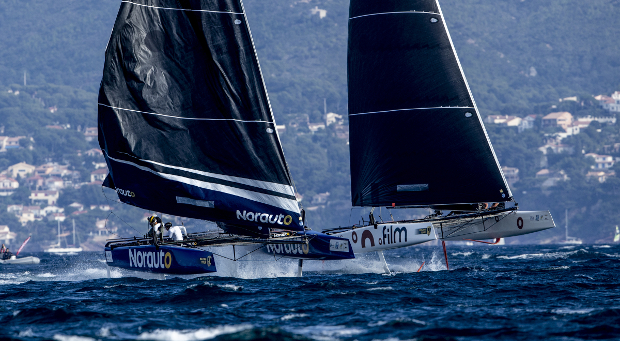 On the penultimate day of the GC32 TPM Med Cup, Franck Cammas’ Norauto powered by Team France fought back to second place overall after a disappointing Friday when the crew was crippled by a broken foil.

Today was supposed to be the lightest of the Med Cup, taking place with support from Toulon Provence Mediterranée and the city of Toulon, but in fact the wind was frequently into the high teens, once again from the east and with an unusually large, confused seaway.

Cammas said that yesterday they hadn’t been able to foil downwind on one gybe. However overnight the French team replaced their broken foil with one borrowed from Erik Maris’ Zoulou team. Thanks to this, Norauto was back on their expected form, winning today’s first two races, concluding the day with two seconds.

Ainslie came out on top in one; Cammas in the other. “It was very tight. We separated from him at the end of the upwind, which was a good move, but I think downwind we both crashed down once or twice,” Cammas said of the last race.

Going into the final day, Cammas acknowledges that with their 13-point disadvantage from Ainslie’s team will be difficult to catch, but his eye is on the bigger prize – winning the annual GC32 Racing Tour overall for a second time. Tomorrow they will not be taking risks.

While Norauto was on a charge, once again top performer of the day was Ineos Team UK, skippered by Ben Ainslie, winner of today’s final two races.

“There was a bit more breeze – it was tough and tiring, but good fun,” said Giles Scott, the Rio 2016 Finn gold medallist, who calls tactics. “It was tight racing – a good little course with the wind in this direction.”

After their dramatic dismasting while leading yesterday’s first race, Realteam was back on the race course today after a sleepless night for the team’s shore crew, as they carried out repair work to their carbon spar. “The technical guys did a good job – it is not very cosmetic, but it works,” skipper Jérôme Clerc said of the repair.

In fact the Swiss team, who are the GC32 Racing Tour’s defending champions were the third best-scoring boat today, even winning race three. “We had a good start with good tactics and just kept it simple,” recounted Clerc. “Conditions were good – we could push the boat, just not too much in the waves.”

The day started with a round of the Anonimo Speed Challenge. Held in winds of 17-18 knots, this was won by American Jason Carroll’s Argo, with an average speed of 28.97 knots over a course of 0.7 nautical miles.

With this, Carroll will be making extra space on his wrist for an Anonimo Nautilo GC32 Racing Tour limited edition timepiece he is likely to win. For Argo’s speed today was by far the highest of the year – the previous top run was a 25 to 26 knot average, recorded by Simon Hull’s Frank Racing in Lagos, Portugal.

“It’s a perfect way to end the season – we’re in France, it is starting to be the fall here, it is windy and wavy – exactly what we were prepared for when we came here,” Argo’s Anthony Kotoun explained.

Argo’s third race today took an unexpected turn when owner-driver Jason Carroll fell overboard. He was picked up and deposited back on board and the US team went on to finish the race.

“Luckily someone had grabbed the tiller and the whole safety protocol worked perfectly,” Kotoun said.

“Jason was probably away from us for 45 seconds and in the water for just 25. All credit to (Chief Umpire) Bill O’Hara, who gets the Hasselhoff award!”

Meanwhile, Argo is looking to hang on to the Owner-Driver Championship for 2018. Going into this event, the team was two points clear of Zoulou and Frank Racing. But here in Toulon, they are lying third behind leader Simon Delzoppo’s .film Racing and Zoulou.

This being Saturday in Toulon, the local spectators were out in force in the race village, Plagues du Mouillon’s Anse Tabarly, where crowds were particularly cheering on their local team Métropole Toulon Provence Méditerranée, skippered by 23-year-old Robin Follin.

Tomorrow is the final day of the GC32 TPM Med Cup and due to the strong forecast the start has been brought forward to 1200 BEST.

Following the action tomorrow via our live commentary and tracking at: www.gc32racingtour.com