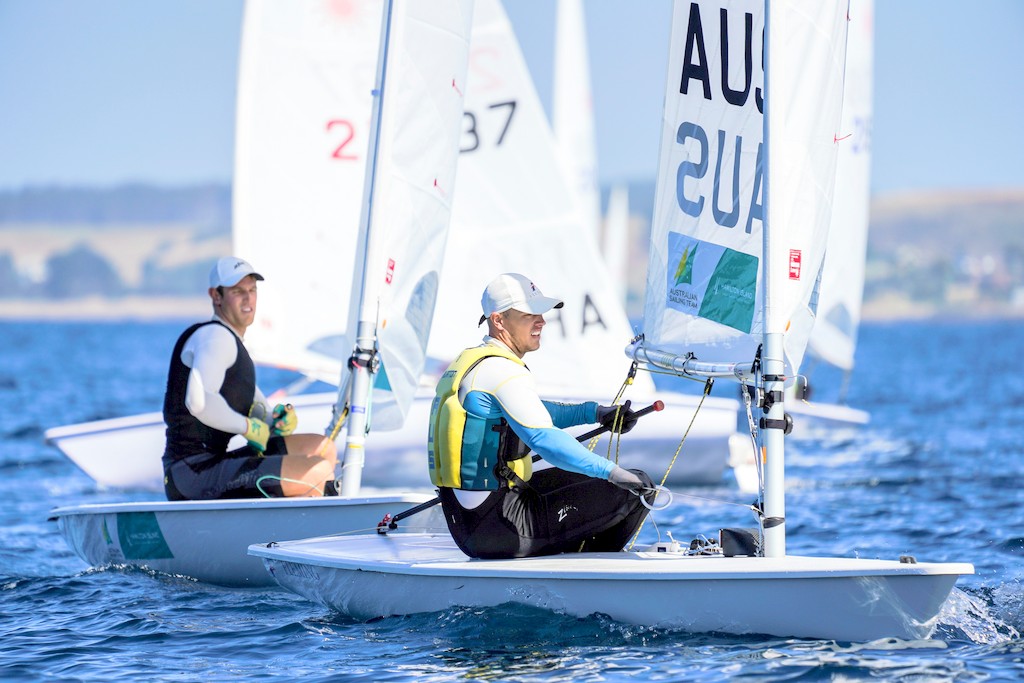 On the final day of competition Burton clinched victory in race 11, taking top honours while Wearn finished fourth.
Wearn won the final race with Burton third, but the NSW sailor’s net 18 points gave him the championship from Wearn on 23 points. Third overall went to the impressive WA sailor Elliott Swifto, despite being black flagged in race 11.

The 12-race series was sailed on the open waters of Bass Strait off Devonport’s Mersey Bluff on Tasmania’s north-west coast.

A huge fleet of 161 Laser Standard Rig, Radial and 4.7 sailors from around Australia and overseas contested the regatta and major logistic effort well handled by Mersey Yacht Club and the Tasmanian District Laser Association.

Forty of the entries were from Tasmanian clubs and most of under 19 year old sailors have now headed south to Hobart to compete in the Radial and 4.7 divisions of the Australian Sailing Youth Championships that start on the River Derwent tomorrow.

The final and deciding day of the 2019 Oceania and Australian Laser Championships began with the fleet being held on shore for a short time to wait for a suitable breeze to fill in at the Bass Strait race areas.

After the previous day’s ‘champagne sailing’ off Mersey Bluff, the first race of the day was again sailed in beautiful conditions.

However, Bass Strait turned on much stronger winds and large waves part way through the final race, with the sudden change in conditions giving the sailors and support craft a challenging finish to what had been a fantastic regatta.

In the 69-boat Radial fleet, 18 boats retired due to the heavy weather.

Experienced Belgium sailor Emma Plasschaert was among the DNFs from the final race, but she still won the open and women championships convincingly.

She finished with a net 16 points, second place went to defending Australian open and youth champion Zac Littlewood (WA) who won the final race to finish with a net 22 points, bouncing back from a BFD in race 11.

Third place in the Radials went to Doi Manami (WA), fourth and first U21 women to Mara Stransky (Qld) and fifth to Otto Henry (NSW) in his first nationals in Lasers.

Another woman sailor, Kristen Wadley (Qld), won the Laser 4.7 from a fleet of 35, but by just one point from Lawson McAullay (WA) who also won the junior boys title.

Anna Vaughan flew back to Tasmania from academic studies in Melbourne to finish 10th overall, the best performance by a Tasmanian Laser sailor at the championships.

Although hosted by the Mersey Yacht Club in conjunction with the Tasmanian District Laser Association, the regatta attracted support from all of the north west and northern Tasmanian yacht clubs, including Wynyard, Burnie, Leven, Port Dalrymple, and Tamar yacht clubs, and also Kingston Beach Sailing Club in the south.

The biggest sailing event held in northern Tasmania, the International Laser Oceania and Australian Championship also had support from the local Devonport community, Devonport City Council, and other Tasmanian sponsors.  This proved to be a very successful regional event.

Full results are available from the link on the event website https://www.auslasernationals.com.au/.