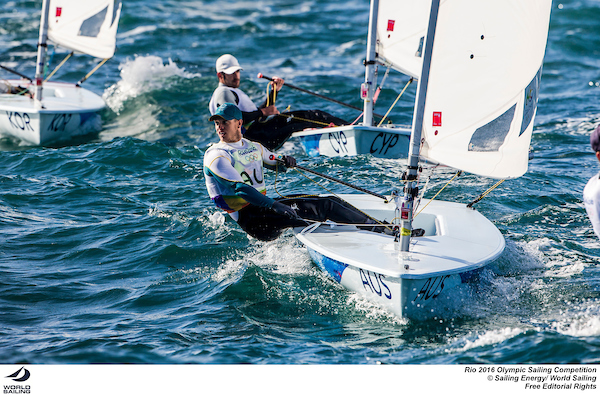 Tom Burton with eyes out of the boat. Photo Sailing Energy/World Sailing.

Australian Laser sailor Tom Burton goes into Monday's medal race guaranteed a place on the podium. He finished the qualifying series 10 points behind Croatian Tonci Stipanovic and 10 points ahead of third-placed Sam Meech of New Zealand.

If the conditions are light there is a chance at Gold on Monday, but Stipanovic needs only to finish fifth, or at worst five places behind Burton, to be assured of standing on the top step of the podium. The question on everyone's lips this evening was whether the Croatian would do to Burton what Australian Tom Slingsby did to Stipanovic's best mate and training partner Pavlos Contides at London 2012.

Burton is in a strong position for Silver but if Meech finishes six places ahead of the Australian, Burton would drop to the bronze.

Meech himself is still under pressure from Jean Baptiste Bernaz (FRA) whi is nine points behind him and two big threats, five times Olympic medalist Robert Scheidt (BRA) and double world champion Nick Thompson who are 10 points behind.

When asked how he would approach the medal race, Burton said he hadn't really had time to think about it. “During the tow-in a few situations were going through my head. Obviously it's nice to have a medal locked in but I'm sure Tonci has something in store for me.”

He admitted that he thought he had blown his chances in the first few days but then everyone else had high scores in the crazy conditions that have prevailed here in Rio. “”The last race I just wanted to put a result on the board. I lost a few points by being too conservative, but it is what it is.”

He says tomorrow's rest day before the double-points medal race will probably involve a trip to the physio because he tweaked his back today, so he will probably “have a quiet one”.