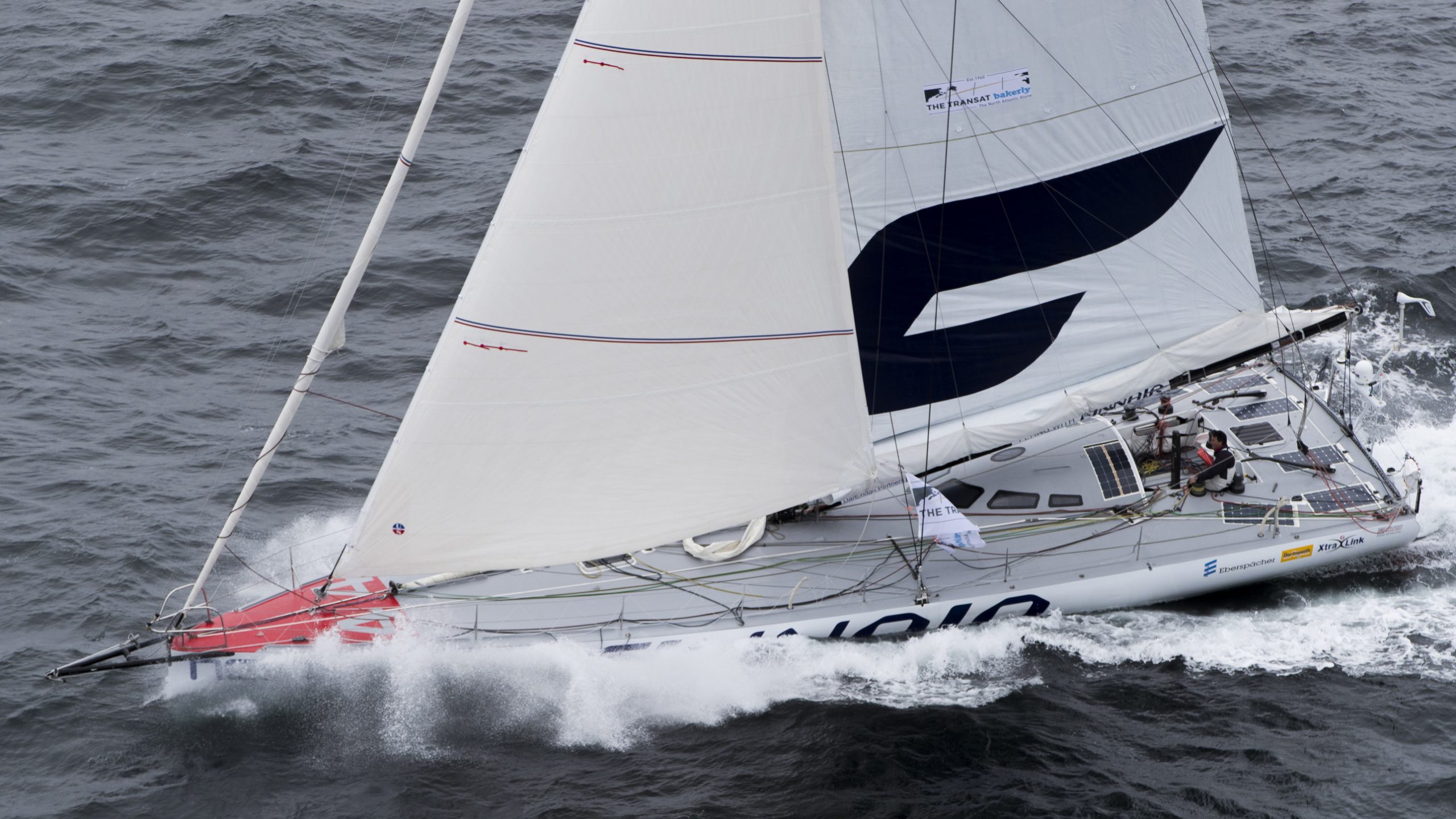 44 during The Transat. Photo Lloyd Images.

The British sailor Richard Tolkien today spoke about his dramatic rescue in the mid-Atlantic when he was picked up by a cargo ship after deciding to abandon his IMOCA 60, 44, in The Transat bakerly.

Tolkien, 61, from Lymington in Hampshire on the English south coast, was picked up by the cargo ship Anton Topic at a position about 880 nautical miles west of Horta in the Azores.

He had been sailing in last place in the IMOCA fleet in an old Finot-design from 1998 that was originally called Sodebo and sailed by Frenchman Thomas Coville. Tolkien took the difficult decision to abandon the boat  – now called 44 after the UK dialing code – on Friday night and then made a perilous, but successful, transfer to the ship.

“I had had a sustained period of bad weather…and the wind had started to go down from 40 knots to 30,” he said on the satellite phone from the bridge of the Anton Topic this morning as it made its way towards Philadelphia. “I thought there was no trouble ahead and I was down below, looking forward to calmer conditions, when there was a large bang.

“The fitting holding the staysail stay to the deck had ruptured. By the time I got on deck the sail was flailing around. I turned the boat downwind and spent the next two hours trying to sort out the mess – it is very difficult on a boat of that size.

“I was hit in the face and then later again by a glancing blow to the side of the face by the furling drum at the bottom of the stay. On the second occasion there was a lot of blood on the deck and I went down into the cabin and realised I needed to call for assistance.

“I used the AIS (Automatic Identification System) to call up the nearest ship and the Anton Topic and its captain and crew were not too far away and came towards me and manoeuvred their ship alongside me. It was not easy at all and then I had to climb up the pilot ladder at the side of the ship and I only just made it, so it was very difficult.

“I had to leave the boat which has a tracker on it – not an easy situation – and I hope to rescue the boat. It was just a glancing blow – but if it had been a bit more full-on, then the outcome could have been very different,” Tolkien concluded.

When he got on board the Anton Topic he was treated by the ship’s medic who applied four stitches to his head wound. After a few hours sleep on board, Tolkien said he was happy that all his faculties were intact. “Apart from being tired and bit shocked, I’m OK,” he said.

Tolkien set sail from Plymouth bound for New York with 24 other solo skippers on The Transat bakerly on May 2nd. A former civil servant and corporate financier, Tolkien is an experienced amateur ocean racer. He completed this race in 1992, finishing 6th in the monohull division after 17 days. In 2000 he entered the Vendée Globe solo round-the-world race but had to retire halfway down the Atlantic with sail damage. In 2010 he finished 33rd in the Route du Rhum Destination Guadeloupe.

At the start of this race Tolkien said his aim was not to beat the other boats in his class but to qualify for the Vendée and learn about his boat.