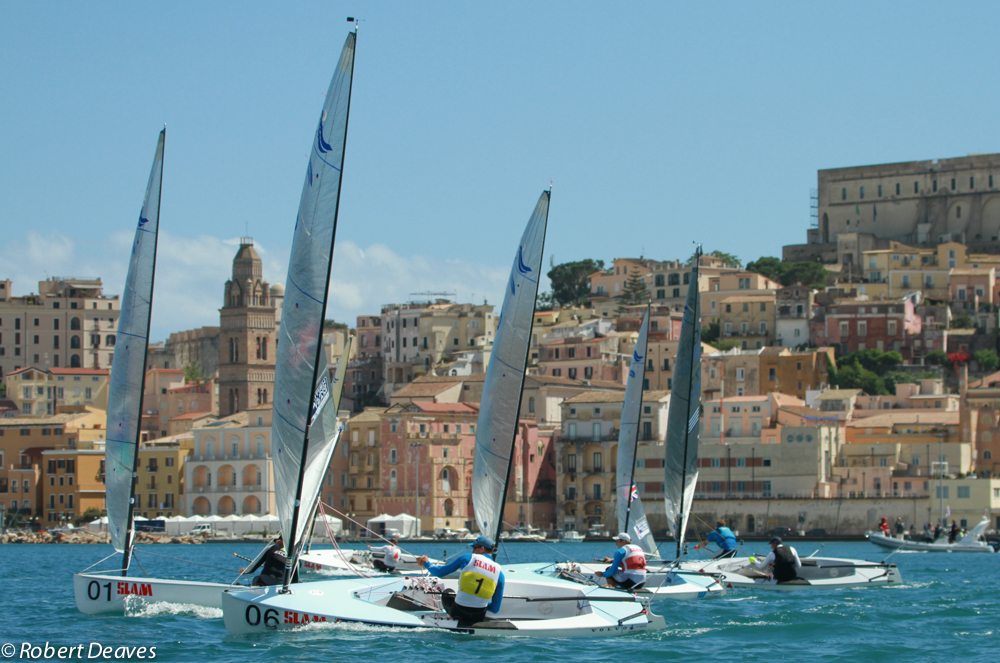 Giles Scott (GBR) lifted the Finn Gold Cup for the fourth time today in Gaeta, Italy, after a spectacular medal race sailed close to the shores of the impressive and historic old town. People from the town and local children crowded the shoreline to get a view of the Finn class strongman heroes as they battled hard against the beautiful backdrop of the medieval town. While Scott had done enough to secure the title, and the race for the silver was reasonably secure, the battle for the bronze was very hot. In the end Jonas Høgh-Christensen (DEN) took the silver and Pieter-Jan Postma (NED) took the bronze. The medal race was won by Høgh-Christensen.

The medal race took place downwind of the town with the windward mark just off the shore. A local radio station entertained the crowds and immediately after racing the top three were take ashore for a medal ceremony under the town walls. A great initiative to involve a local school in the day included the three medalists presenting the winners of a painting competition started earlier in the week depicting the sailing at the Finn Gold Cup. It was a fantastic way to involve the local people and take sailing to the community that had hosted the event for the past week.

Giorgio Poggi (ITA) led the medal race from the first mark to half way down the final run when Høgh-Christsensen found a gust and sailed past. Postma stuck close to Ioannis Mitakis (GRE), but nearly lost to Jake Lilley (AUS) on the opposite side. In the end nothing changed, except Mitakis got a flag on the final leg to drop to sixth while Lilley and Poggi moved up one place.

The event got underway in very light conditions, with several races postponed early in the week due to a lack of wind.  However, conditions improved as the week went on, and the Aussies revelled in the conditions.

After a slower start, Queenslander Jake Lilley came into the medal race on the final day in fifth overall.  After posting 47, 14, and 21 in the first three races of the series, Lilley built some momentum and completed the last four races of the fleet racing series with a consistent 5, 6, 7, 6.  A solid fourth placing in the medal race was enough to move Lilley into fourth on the overall standings.

“This week we were testing some new equipment.  We made a lot of progress, learnt a lot and continued to refine the way I am sailing,” said Lilley at the conclusion of racing.

“The event was plagued with a lot of light winds. Eventually we got some wind on the penultimate day, then a light to moderate breeze for the medal race, right under the Old Town of Gaeta.

“This result was a personal best for me at the World Championships, and coming off the back of a win at Hyeres, I’m pretty happy.”

Conditions on the final day were lighter, with racing completed close to the city of Gaeta, making conditions quite tricky for the sailors.  Shifting wind conditions made getting a start underway in the medal race challenging, with two attempts made before the race finally got underway.  It was a tough start to the race for Lilley, who rounded the first mark in eighth position and had to claw his way back, ultimately crossing the finish line in fourth place.

Meanwhile Victorian Oliver Tweddell also came back for a strong finish in this regatta. After placing in the ‘twenties’ in the first four races, Tweddell posted a 2, 6, 2 in the final three races of the fleet racing series.  However, his thirteenth overall going into the final day was not enough to put him into the Medal Race, with only the top ten boats sailing in this event.  Instead, Tweddell competed in the final fleet race, winning it to move his overall standing up to eleventh place.

For full results and more information on the Finn Gold Cup visit: http://2016.finngoldcup.org