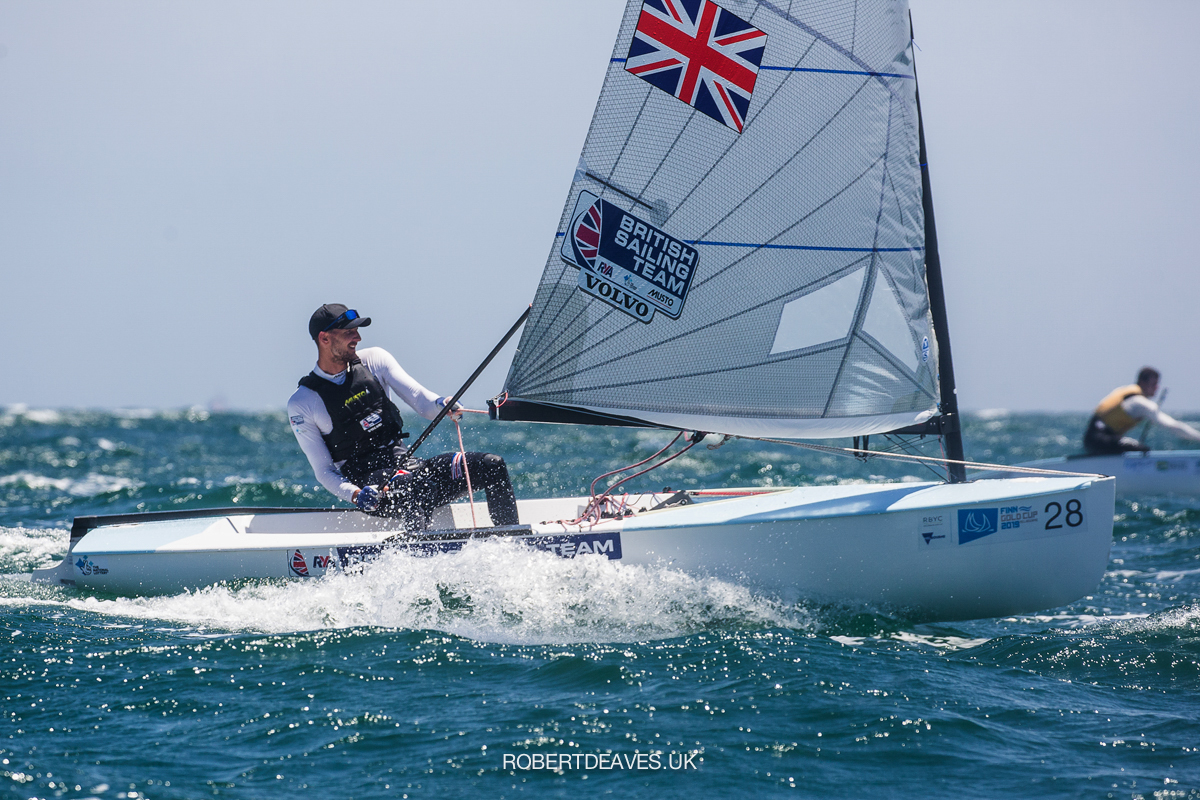 There are always many stories to come out of the Olympic Games, but for the 19 Finn sailors at Enoshima, these are all the more poignant as they contemplate the Finn’s final appearance at the Games and maybe their only or final chance for Olympic glory.

It will be an event like no other before, and hopefully never again, but once on the race track, all the stress from the shore must be left behind if anyone is to succeed.

The key factors will be coping with the extreme heat, not getting distracted by the COVID protocols, and being adjustable to the many different conditions expected in Enoshima, from light, shifty and tidal days to huge swells and strong winds.

Shifting gears day-to-day and race-to-race will be essential for success, as will a flexible mindset. No one, apart from the Japanese, will have trained here since 2019, an unheard of phenomenon at an Olympic venue, but perhaps also a great equaliser for those on limited travel budgets.

While defending champion Giles Scott, from Britain, still has a target on his back, he will have a very hard time to win back-to-back Olympics. He also is attempting to continue perhaps the longest winning streak in Olympic sailing history with the last five Finn gold medals being won by Britain.

He said, “It’s been a long journey getting to this Olympics and it’s amazing that it’s finally actually happening. I’ve been fortunate to stay busy over the last few years after the COVID delays and this Games marks the end point of a long stint with both Olympic and AC commitments. I want it to end on a high.

“None of us have been here in Japan for around two years, so the 10 days or so we had here has been a bit of a quick refresher course in what this venue is all about. Having said that we’ve had incredibly consistent light breezes over the past week, and as always I’m sure the start of the regatta will bring about some change, so it’s going to be an interesting one.”

In the run up to Rio 2016, Scott was dominant, winning pretty much every event he entered. This time things are vastly different, and he has not won a major event since the 2019 European Championship. However, “The training here has been going well and to be honest I’m ignoring any kind of pre-chat and focussing on the job in hand and preparing myself for a week long fight.”

Nicholas Heiner, from The Netherlands, has been pushing the front for the last four years, but has been a bit inconsistent this year despite lots of race wins. However, if the next week goes his way, he will be a definite contender for gold.

He reflected on the journey so far after switching to the Finn following seven years of Laser sailing and missing out on Rio selection.

“I looked where I wanted to go next and despite missing out on Rio, the Olympic dream was definitely still alive. But I also always had a goal to sail the Ocean Race, and the America’s Cup, and I knew while the Laser gave me the racing skills, to be a professional sailor you need the technical side, the gear development, sails and masts – the whole process. So for me it was actually quite an easy decision to change to the Finn.”

“It’s a really interesting boat to race and to set up a good campaign. For me it was a great new challenge and gave me a lot of energy. I never regretted changing to the Finn and I think it’s a great loss for Olympic sailing that the Finn is out. This is the last Olympic medal.”

He says it is the most all-round boat for the Olympics.

“I love how physical the boat is. I love the gear side and I think it’s awesome racing. You need to be an all round sailor to develop and understand the boat and make it go fast. It’s a great boat, and it’s had a great history. That speaks for itself, with so many great legends in the sport sailing this boat. And that history won’t go away over the coming Olympics.”

Part of that history of course was his father, Roy Heiner, winning the bronze medal in the Finn at Atlanta 1996.

“He’s not here at the moment, but he’s helped out a lot over the winter doing more on the gear side. But it doesn’t matter whether it’s the first or the last time, it’s still an Olympic medal and we still want to write history for Holland and this would mean a lot for us, and what we always aim for. It will be an amazing event and a great last Olympic champion, whoever that might become.”

Despite the lack of training for the last two years, Heiner has spent the most time here prior to 2019 out of everyone, so is hoping that pays off.

“It’s been a while since I have been here, but everyone needs to deal with it, so that makes it more equal for everyone. I like sailing here. It almost comes pretty natural, with good memories of always being on the podium.”

On the changing forecast over the coming days.

“We always say Japan is about all-round sailing so I think we’ll get a bit of everything. This last week we’ve had 6-7 days of nice sea breezes of 7-12 knots, but that means during the Olympics things will be completely different. It suits me quite nicely, when we get a range of different conditions. Looking forward to getting started and it will be an amazing event even though it’s not normal. Nevertheless I love racing the Finn and I love racing these guys.”

Racing for the Finns begins on Tuesday.