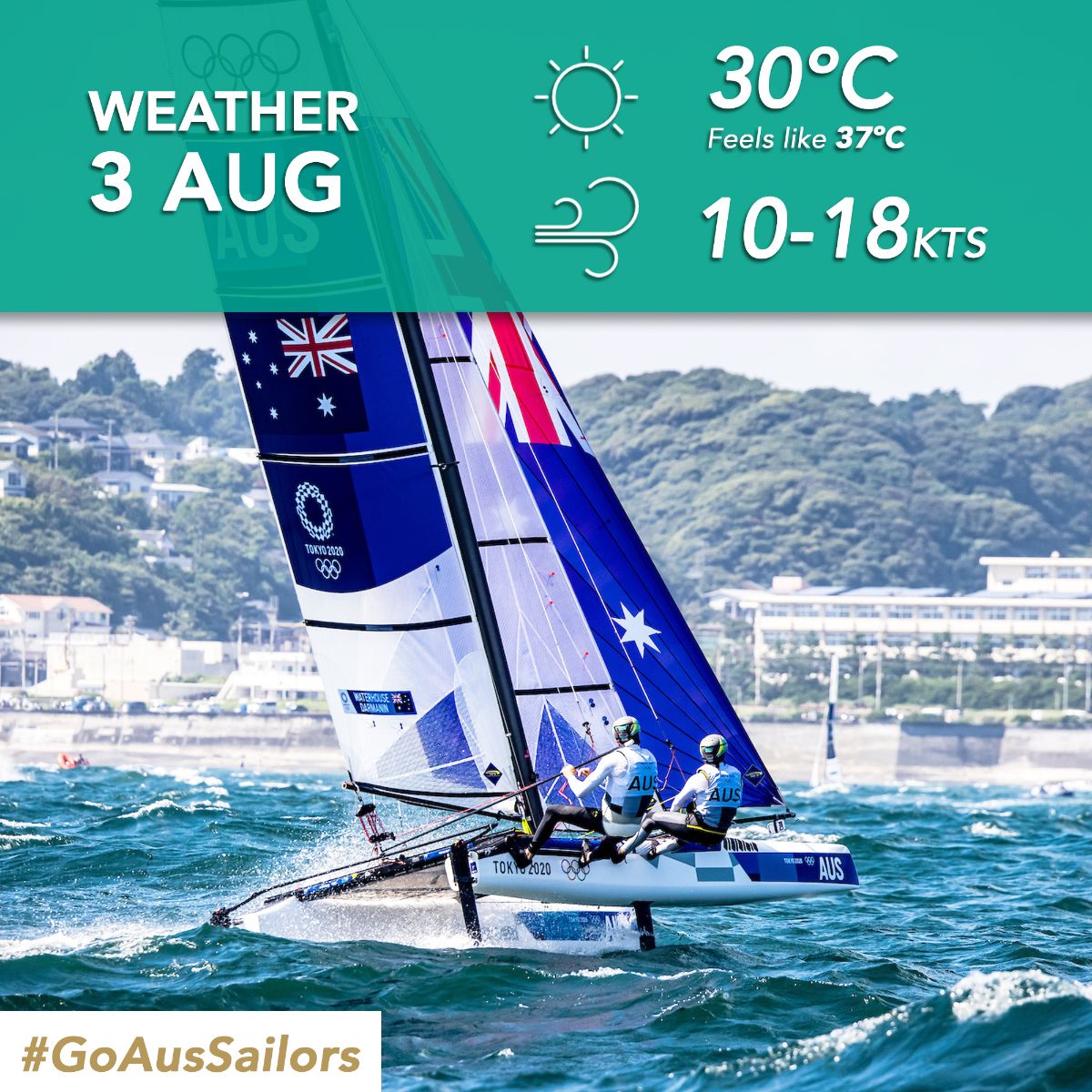 Iain Murray, Australian Sailing Team Leader said, “Everyone agrees that Race Management made the correct decision yesterday regarding the postponement of racing. To conclude people’s five-year campaigns in very marginal conditions is not the way the Olympics needs to be conducted; so I think they made the correct call especially with the prospect of good weather today.

Yesterday was quite humid, so our team spent the day trying to stay out the of heat, stay cool, laying low and looking after themselves. Everyone was quite happy to go home and come back again today.”

“Today’s weather is looking a lit bit like Sunday’s. We are expecting roughly 10 knots with gusts a bit higher than that; primarily from a southerly direction but it could wobble either side of south. It will be in the 170 to 190-type direction.

“It will be a gradient-driven day. The sea temperature here is really hot so the thermal influence is becoming less and less as we go on. So you don’t see the big builds like we would in Sydney with a nor-east sea breeze. For example. It’s a thermally-enhanced gradient breeze, but it’s not to the same effect that we are used to in the Southern Hemisphere in the colder waters.”

“Since it’s their first Olympic Games, Nia and Monique will be wanting to finish it off as strongly as they can. Every little bit they can learn will help them continue their forward momentum into any potential future campaigns.

“Marseilles (sailing venue for Paris 2024 Olympics) is just three years away, so these are golden moments for them. They will be taking everything in, making the most of it and logging it as an experience that others don’t have and something that will help them in the future.”

“The 470 guys are on at the same time as the (470) girls and will be on the same inner and outer courses like they were the day before yesterday.

“They will be trying to get into the same rhythm as they were in on Sunday. The weather is very similar to Sunday, so today, they will keep it simple and accurate, don’t over-complicate it, sail the boat, make the right choice at the start, have the right strategy up the first beat and ultimately get a good result.

“Jake will put everything on the line today. Historically he has finished regattas well and he has shown every sign of that here in Japan. What do they say in sailing? You’re only as good as your last race, and this is the last race in the Finn class at the Olympics for everyone.

“I am sure everyone is going to want to win the last Finn race in the Olympics, and I think Jake will be right in there with everyone else.”

“The strategy for Jason and Lisa today will be to win the race. They will want to put four boats between themselves and the Germans as their goal; it’s as simple as that.

“They will look to get away well at the start; which they’ve been doing a great job of so far this week. Then they need to get in a good position at the top mark and let their downwind do the talking. If they can pull off a good start, there is no doubt they will be able to convert that into a four place gap on the Germans.”