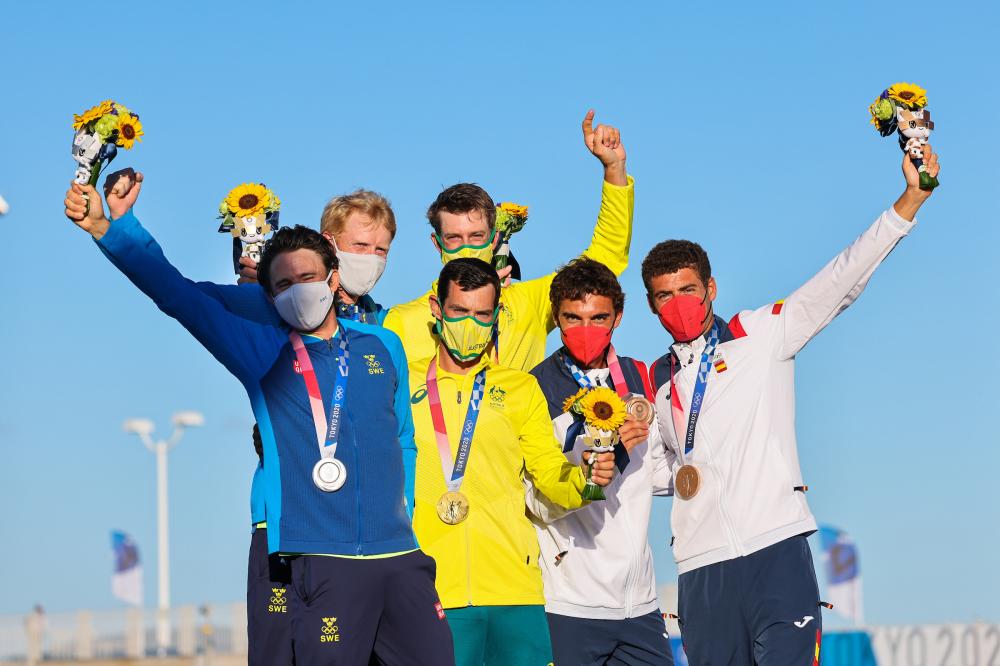 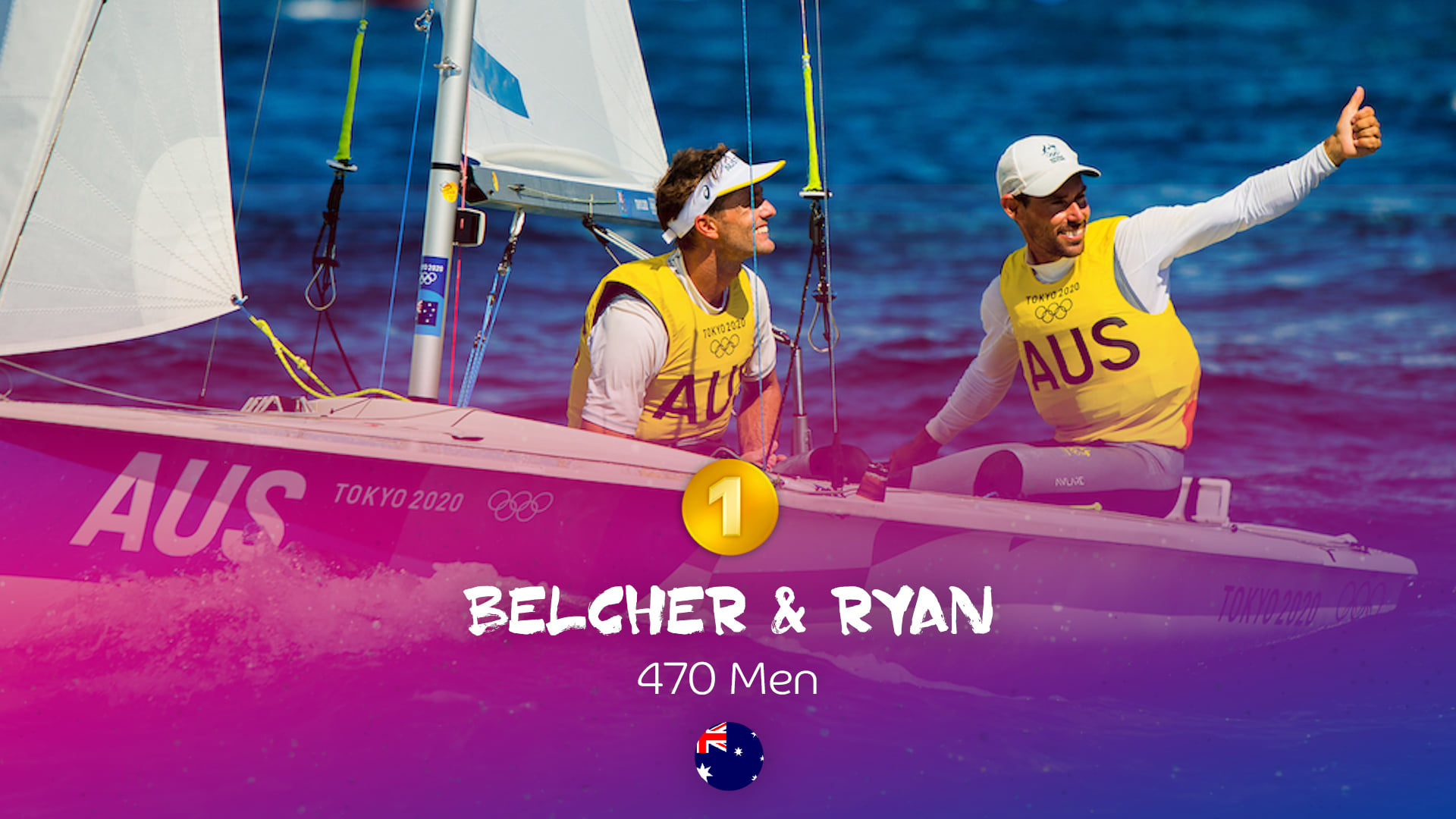 Mat Belcher and Will Ryan (AUS) won the gold medal by a 22-point margin in the Men's 470. Pic - Sailing Energy / World Sailing 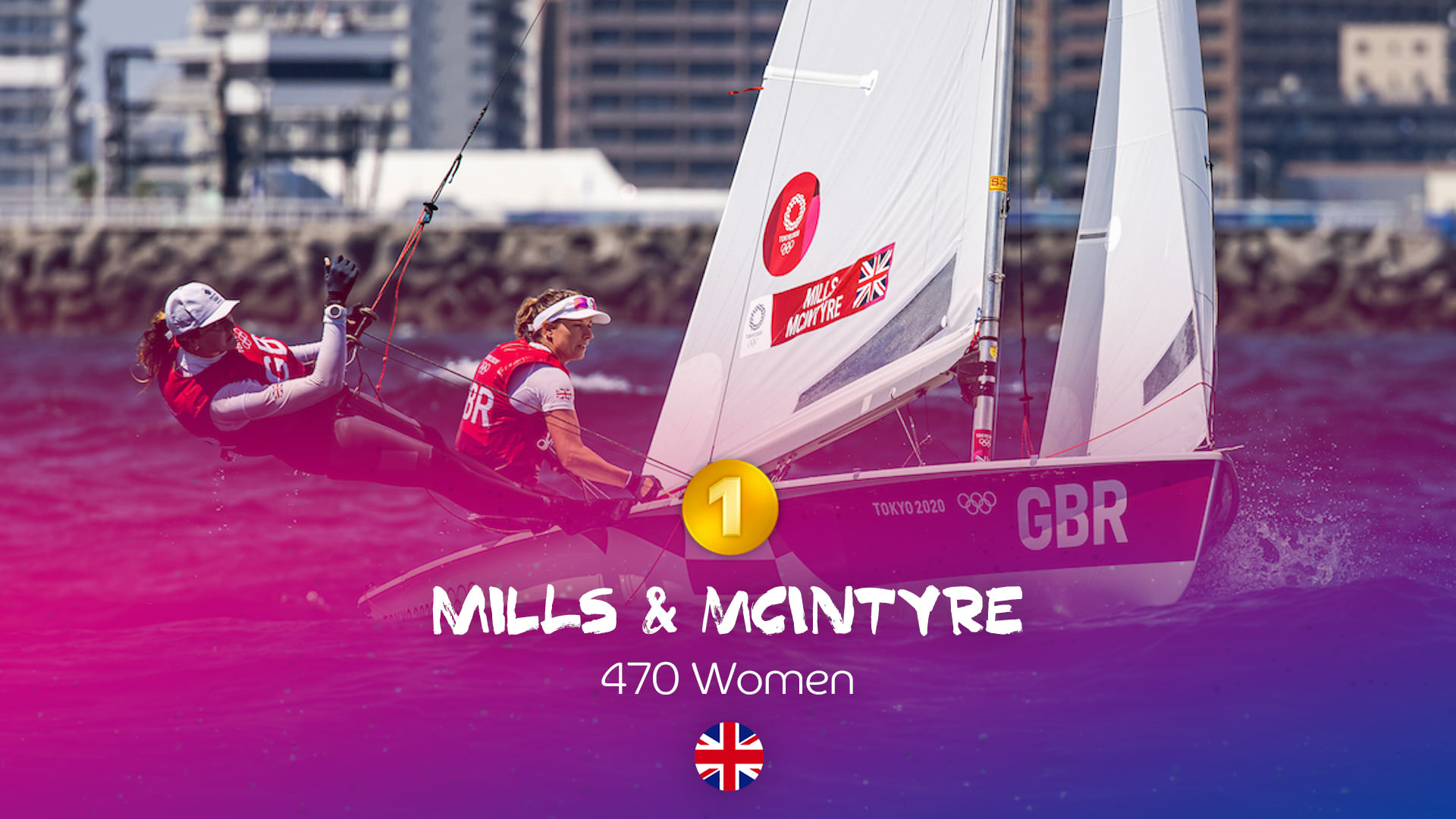 470 skipper Hannah Mills is now the most successful female Olympian in the history of sailing. Pic - World Sailing / Sailing Energy 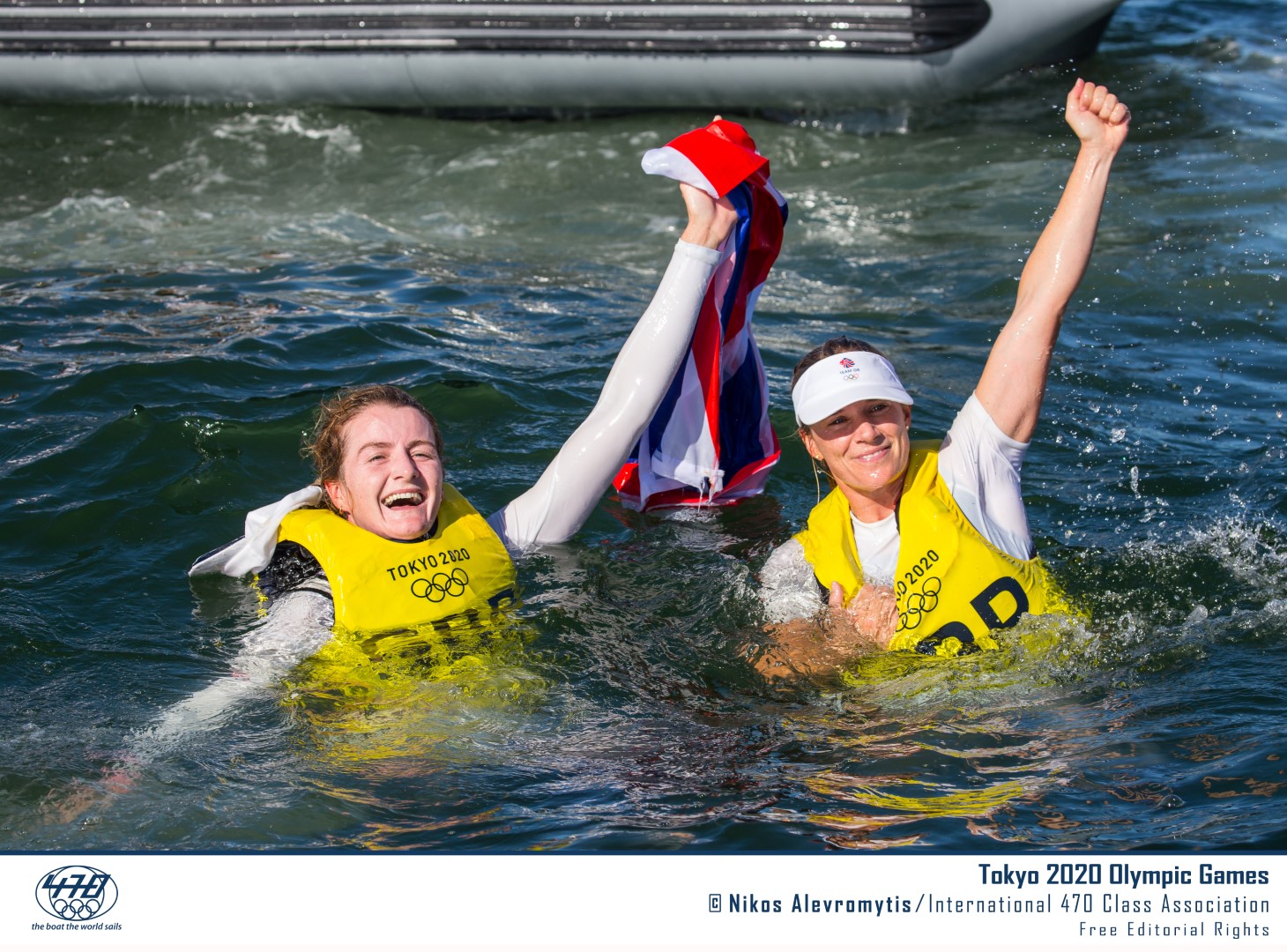 Hannah Mills and Eilidh McIntyre (GBR) celebrate their gold medal and the end of a great partnership in the Women's 470 class. 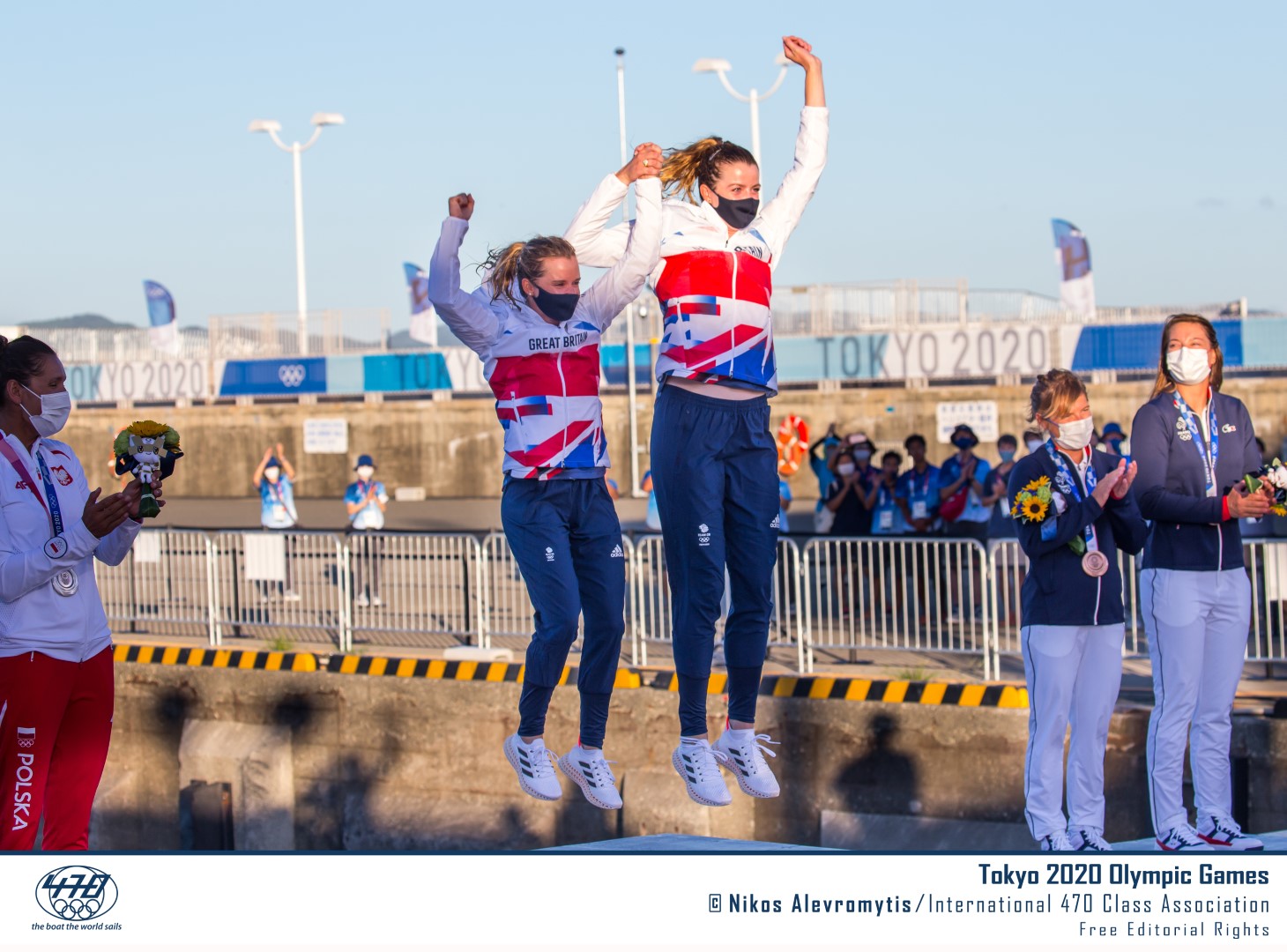 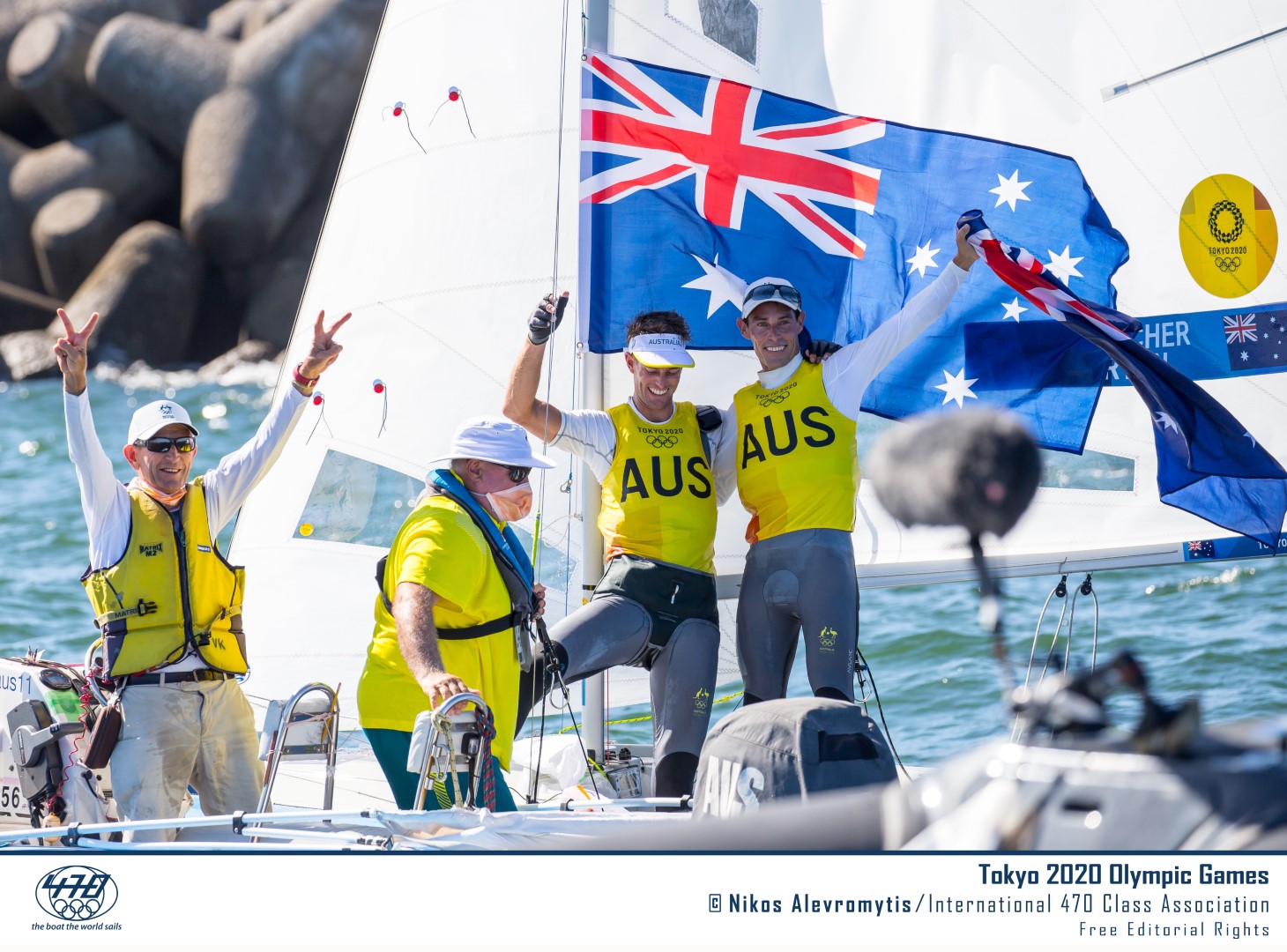 Will Ryan and Mat Belcher, along with their sailing coach Victor Kovalenko, and the Australian Sailing Team Leader Iain Murray, celebrate the pair's win in the 470 class. 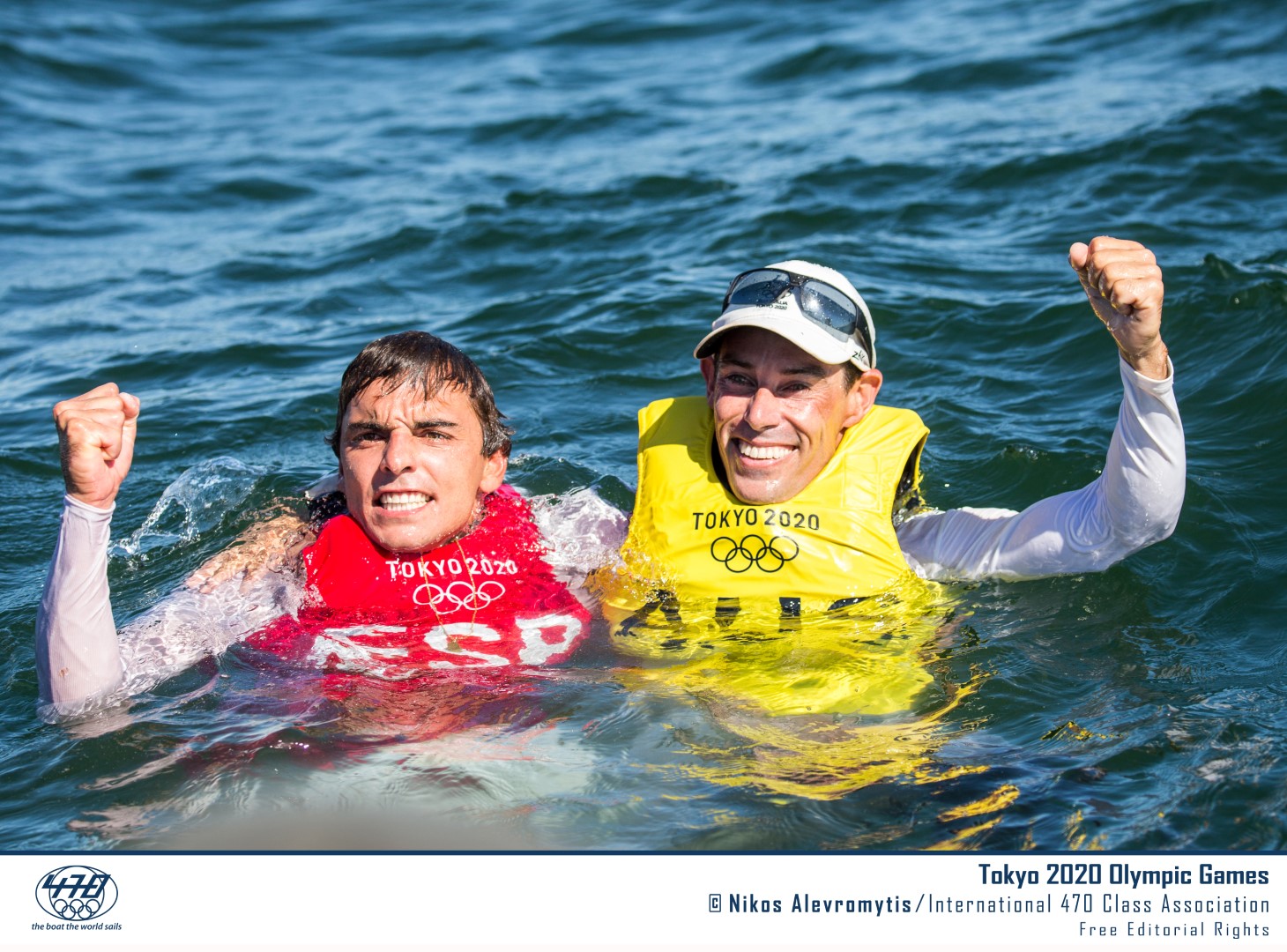 The Tokyo 2020 Olympic Sailing Competition concluded with two Medal Races in the 470 Men and 470 Women.

With the 470 becoming a Mixed Event for Paris 2024, today was the last time that these partnerships would race side by side in the same boat.

The 8 to 10 knot wind conditions made for a tough cardiovascular contest combined with close quarters tactics and precision boat handling.

Out of the start it was even between the leading contenders for silver and bronze – Spain and Sweden. Both teams made good starts in the light wind conditions, the crews working hard to power the boat through the waves using kinetic bouncing.

Australia had started on port tack, going behind the fleet so as not to disrupt the competition for silver and bronze, but towards the top of the course Belcher and Ryan were back in contention for the lead, along with New Zealand now challenging Spain.

Coming in from the left side of the course and arriving at the top mark just in front were Sweden neck and neck with Australia, Spain in third. Dahlberg and Bergstrom were looking good for the silver medal if they could hold the lead.

Australia pumped, ooched and surfed into a narrow lead around the leeward gate, and now the top four in the race were the top four in the overall standings: Australia, Sweden, Spain and New Zealand, racing line abreast towards the last windward mark.

Belcher and Ryan won the Medal Race, their last race together, the perfect conclusion to a stellar partnership. Sweden crossed in second and seized the silver. The USA and New Zealand had overtaken Spain, but Xammar and Rodriguez clung on to bronze by just two points from the Kiwis.

Belcher is the all-time greatest 470 sailor as he bows out of the class, with today’s gold to add to his gold from London 2012 and silver from Rio 2016. The Australian has won eight world titles, winning five of those with Ryan.

“It’s been an incredible journey,” said Belcher, “and a great honour to race alongside this guy,” he added, gesturing towards Ryan.

“It’s been a great partnership, and it’s been five years just to get one more step up on the podium and to realise that dream together.”

Ryan commented, “The past nine years since we teamed up, there has been plenty of hard work together, but lots of fun as well. And just really proud of how we made each step along the way.”

At the start the fleet set off on starboard tack except for Poland and France on port tack, both boats making an early break to the right.

Great Britain tacked over towards the other two boats and was ahead, Mills and McIntyre at times putting a close cover on Lecointre and Retornaz to stop the French breaking through to the front of the fleet. Other teams took up the running for the lead, with Switzerland and Germany going fast.

Around the first mark Switzerland was ahead, with Great Britain in second, France back in sixth, one place ahead of Poland. Over the next lap, Poland climbed up to fourth, two places in front of France and they were now equal on points. However, the Polish team dropped back again and were in bronze.

Linda Fahrni and Maja Siegenthaler (SUI) won the Medal Race, taking fourth overall. Next came Germany, Israel and Poland, with Great Britain in fifth. This put Poland back on equal points with France, giving silver and bronze to France.

Celebrations of the gold medal didn’t last long on the British boat because soon after the finish, the jury was informed that France was protesting Great Britain. The protest was heard ashore and the case dismissed. It had been a brief delay to the medal celebrations, but at last Great Britain could celebrate the gold.

Along with silver from London 2012 and gold from Rio 2016, gold in Tokyo makes Mills the most successful ever female Olympic sailor. McIntyre’s gold matches the achievement of her father Mike McIntyre who won Star keelboat gold for Great Britain in 1988. Lecointre repeats her bronze from Rio 2016.

“It’s been a hard regatta all week, and I haven’t had much time to think about celebrating the win yet. We were just so focused on executing our best race in what was probably my last time in a 470,” said Mills, who retires from Olympic competition. McIntyre said her primary emotion was relief. “Relief that we’ve come and achieve what we set out to do, and to be sharing the podium with these two amazing teams.”