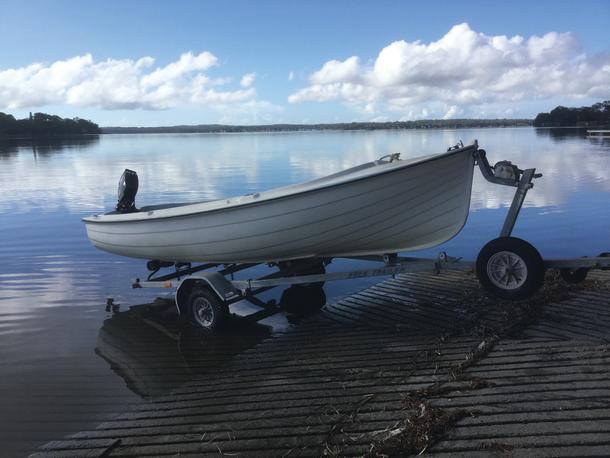 Released on the Aussie market in 1988 and discontinued in 2006, the M2.5A was a derated version of the M3.5A originally released in 1975. It was a simple direct-drive, two stroke that suited small inflatables and dinghies and racked up an impressive reputation for reliability.

All variants of the WT47B ran on a 50:1 premix. Originally the break-in mix during the first ten hours was 20:1 using dedicated outboard oil but, if this was not available, a 15:1 mix of unleaded and SAE30 four stroke lawnmower oil could be used, leaning to 20:1 after break-in. In later models the break-in time was reduced to five hours on 25:1 of unleaded and outboard oil, preferably Valvoline TCW-3.

Why the M2.5A stood out from all of these was its massive wide open throttle (WOT) range of 1400 revolutions per minute, ensuring the engine was never likely to be overloaded. Combined with a choice of six props from 4.3 inches to seven inches of pitch, the M2.5A suited more hulls than the direct competition.

As with all of the variants, the M2.5A was designed for transom heights to 16″ whereas the Suzuki and Yamaha competition were intended for transoms no more than 15″. If either of these are used on a 16″ transom they suffer cooling water starvation due to aerated water from under the transom.

The WT47B power head is the essence of simplicity, making it ideal for cruising yachties who may not have access to service facilities. For example, there was just one piston ring that did the duties of both maintaining cylinder compression and scraping oil.

The carburettor had a single jet with a needle valve that could be raised or lowered in four steps to make the air/fuel ratio richer or leaner. Because the M2.5A developed only 69 per cent of the M3.5A’s output the needle was set lean, resulting in fuel efficiency not far behind small four stroke outboards.

The carbie was gravity fed from a 1.4 litre integral fuel tank via a fuel cock. The throttle and choke slide controls were connected directly to the carbie eliminating cables and linkages.

Up until 1991 all variants of the WT47B power head had a Mitsubishi Electric flywheel magneto with breaker points and the option of a 12 volt 40 watt alternator, but these were dropped in favour of CD ignition. Even with breaker points the ignition system was strong enough to virtually eliminate spark plug fouling, whereas the direct competition had much smaller electrode gaps and easily fouled their plugs during extended low speed operation.

The M2.5A, however, has retained its fixed ignition timing of 20 degrees before top dead centre (BTDC) compared to normal ignition advance of around five degrees BTDC when idling up to around 25° BTDC at WOT. This means the M2.5A runs overly advanced at low to midrange rpm resulting in much higher vibration levels than comparable output four stroke outboards.

All of the direct drive variants cleverly incorporated the water pump impeller in the gear case, a design feature adopted by Suzuki in its DT2 and DT2.2. Not only did the impeller have a very long service life, because it rotated only at prop shaft and not crankshaft rpm, but by removing the prop and gear case end cap the impeller could be easily replaced or cleaned without having to separate the lower unit from the leg and disconnect the clutch rod linkage.

In line with Tohatsu’s engineering approach the lower unit held a massive 90 millilitres of oil, whereas some of the direct drive competition held as little as 35ml. The additional oil capacity meant that should the prop shaft seal have a slight leak there was sufficient oil to prevent gear damage. Plus of course, not having a clutch, the only moving parts in the gear case were the pinion and drive gears. Prop protection was via a traditional shear pin with the props held in place by a large cotter pin. Again the engineering in this area left the competition for dead.

Four trim positions were provided. Early models needed an 8mm socket wrench to remove the trim rod nut to reposition the rod in alternative holes, but later models used a quick-release rod. Up until 1991 when the paintwork was switched from blue to grey no tilt support knob was fitted, meaning the tilt friction nut had to be tightened firmly. In reality this method did not hold the leg up on a tender towed in rough water, so the addition of the tilt knob was very welcome. A screw-in steering friction adjuster allowed the engine to be set in one position when using it as an auxiliary on a sailing boat.

Whereas the Mercury/Mariner and Force variants had lift-off cowls, the Tohatsu models stuck with the original clamshell cowl design. While this made for a very compact engine, having to undo several screws to access the power head was a pain and, in later years, this affected the appeal of Tohatsu models. If the recoil starter failed both halves had to be removed and the finicky screws could easily be lost overboard. At least a clip-on hatch was fitted to access the spark plug.

Because a thermostat was not fitted in the cooling water passages these were fairly small to prevent over-cooling under low loads, such as trolling fishing. As I found out the hard way when my 1990 model M3.5A was stowed on its side in the cabin of my 6.7m plywood Bluebird keelboat, accumulations of aluminium chloride crystals, commonly mistaken as salt, would clog these passages resulting in occasional cylinder head removal to clear out the deposits. Removing the cylinder head is not easy because it is also the cradle for the fuel tank, so some major disassembly is required. So if you do not have access to a flushing drum after using the engine in saltwater it should always be stowed upright to allow all water to drain from the cooling passages.

Getting to know the M2.5A

More of a re-acquaintance really.

I had borrowed 1989 and 1996 models but had not tried an M2.5A since then. Unbelievably, Lakeside Marine the national Tohatsu distributor, found a 2008 model engine lying unused in its original shipping box. What a slumber for the last new M2.5A in Oz!

Lakeside’s Trevor Robinson checked the gear oil level, fitted a new spark plug, added a 25:1 mix of premium 95 and semi-synthetic Valvoline outboard oil, filled the test tank and the engine fired up on the first pull.

Since picking up the engine I have run it on exactly the same fuel mix as, being an old fart, I do not think five hours on 25:1 are enough. I figure ten hours are better which are fast approaching.

I guess it was because I had already borrowed two M2.5A and three M3.5A models that I ended up with five of the six prop choices. The standard 5.7″ pitch F6 prop was perfect for my 2003 Sea Jay 3.4 punt and 1981 3.8 metre Fairlite Gull sailing dinghy. But I had also retained the 4.3″ prop used for pushing my Bluey. This was perfect for my mate Richard Ardizzone’s Walker Bay 10 sailing dinghy as the standard F6 had way too coarse a pitch for this short waterline hull.

On the three hulls the loan M2.5A normally started first pull hot or cold but, with the carbie jet set lean, required at least 30 seconds of choke to keep running when cold. Even on 25:1 oil smoke emissions were low with only a faint oil smell in following seas.

All running in was done on the Sea Jay with no WOT operation until the first five hours had been clocked up. Vibration levels during the first two hours were high enough to give my tiller arm flab a real workout and rattled the steering friction adjuster overboard to a new life perplexing bottom feeding fish. So we lashed the carry handle to the hull to prevent the engine from swivelling 180 degrees when tilted. At least on the 15″ transom and set on the second trim hole the M2.5A could be swivelled 180 degrees for reverse.

From two to five hours vibration levels reduced but remained nowhere near as low as the four stroke Aqualine F2.5, reviewed in CruisingHelmsman last year, that I had been testing since May 2017.

Next up was the Fairlite Gull. The relatively long waterline length of this hull allowed the M2.5A to achieve faster than expected speeds and also return incredible fuel efficiency for a two stroke 2.5. Below half throttle opening, however, the foredeck visibly shook, so pottering around bays and up rivers was out.

In comparison there was scarcely any vibration from the F2.5, which was also faster. Set on the second trim hole for best all round performance it was not possible to spin the engine 180 degrees for reverse as the leg contacted the 16″ transom.

On the Walker Bay 10 and set on the third trim hole, vibration through this strongly-built polyethylene hull was low. The 4.3″ prop was a perfect choice but, due to the deeper prop immersion than Richard’s own four stroke Suzuki DF2.5 designed for 15″ transoms, the M2.5A was not as fast and used substantially more fuel.

Its midrange torque, however, makes it ideal for towing a small keelboat as well as pushing the Walker Bay 10. On a 2.4m tender and swinging the 4.3″ prop the 1989 model M2.5A I borrowed towed my 1.6 tonne Bluey at three knots on half throttle, so the engine has the ability to tow a small yacht from one anchorage to another, if the yacht’s auxiliary is not working.

Although the small zinc anode located under the anti-ventilation plate needs frequent replacing when the engine is mounted on a tender rafted alongside a yacht having copper antifouling, the M2.5A has excellent saltwater corrosion resistance. After a total of 130 hours of salt water leg/lower unit immersion, the 1996 model M2.5A had only slight surface rusting on the stainless steel fuel cock clips and prop shaft, with the paintwork still appearing in showroom condition.

Resale values are good too. According to Tomos Marine of Marks Point NSW my local Tohatsu dealer, a 2008 model M2.5A in good condition fetches up to $650, while a 1988 model is still worth $100.

The M2.5A is a throwback to a much simpler age when direct drive outboards were the norm. In the sixties it was possible to buy a direct drive engine as powerful as the Johnson 5, based on the long running 6. I still occasionally use my direct drive 1969 Johnson 1.5 because it brings back childhood memories.

As the M2.5A was around for so long spares availability is good, with parts interchangeable with the Mercury 2.2, Mariner/Mercury M2.5 and Force 3. The high vibration levels at low to midrange rpm do limit the M2.5A to inflatables having solid timber transoms or hulls like the Walker Bay 10 or even the old polyethylene Pioneer 10 dinghy.

But if you want to lose flab the M2.5A sure is the right engine! ≈