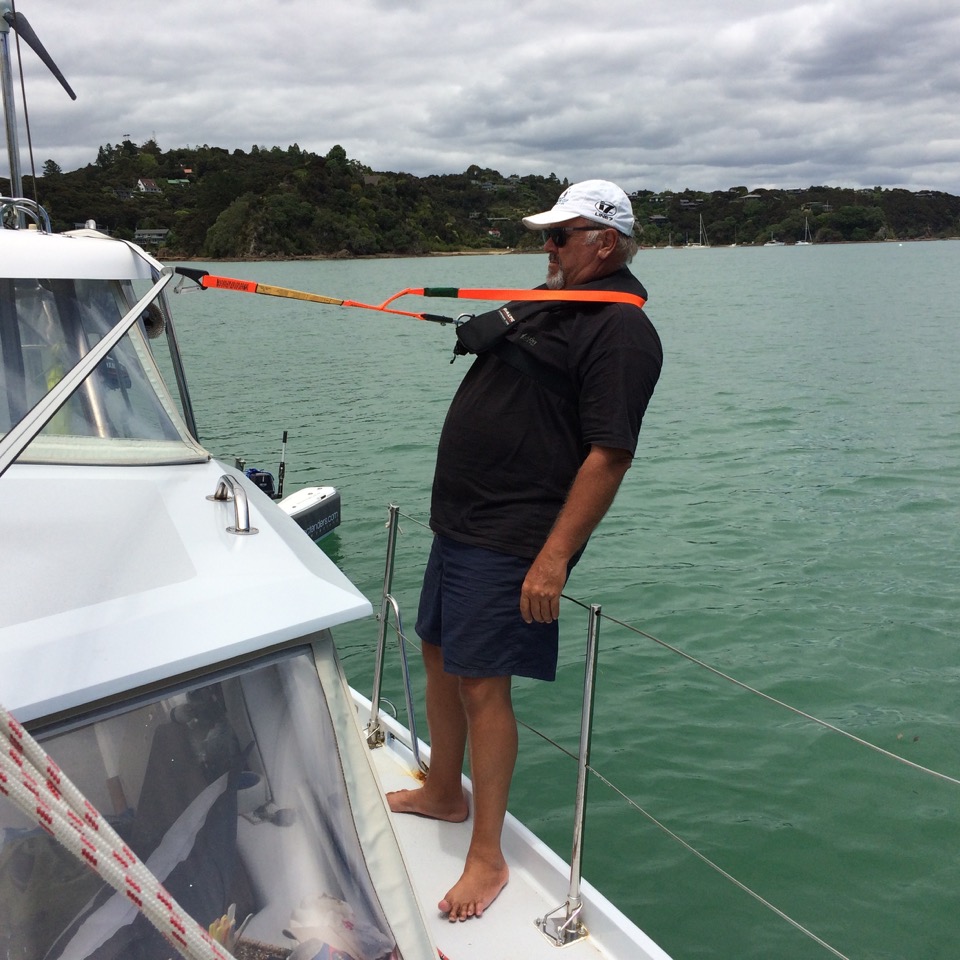 A recent article in an overseas magazine has prompted discussion on the value (and danger) of tying yourself to your boat. John and Lyn Martine of the Island Cruising Association wrote this excellent piece in reply, aimed at cruising couples:

There has been much discussion of late relating to the use of tethers while working on deck – some saying they should be worn at all times and some saying not at all (and in fact can be, in the wrong circumstance, dangerous). I have some views that I’ve shared here, some of which are deliberately inflammatory in order to get you thinking and to illicit your response.

The simple answer is YES to the question, to tether or not. Not, however, to tether you to the boat, rather to stop you going over the side in the first place. A MOB should begin and end at the lifelines, my first rule, DON’T GO OVER THE SIDE, treat the lifelines like the top of a 500-foot cliff. Staying aboard, or in the worst case surviving a MOB, starts well before anyone goes on deck.

Unlike a fully crewed race yacht your average cruiser is usually a couple and as we’re cruising-orientated we’ll be concentrating on short-handed – this applies to both extended coastal and offshore passages. Sure some cruising couples may have crew for the longer passages, likely younger and fitter so they can be sent forward to do the mast and foredeck work, but it’s when we are just two-up the risks need to be thought through, carefully analysed and mitigated. There is no Ambulance at the bottom of that cliff; there are just too many factors that make recovery problematic.

It’s also becoming clear from recent studies, trials and anecdotal evidence that if you do find yourself over the side with a tether connecting you to the boat it’s no longer your best friend. Trials show that regardless of how the tether is connected to the harness, either front or back, if the vessel is doing more than three knots of boat speed the MOB will struggle to breath, get injured from wave and hull strike and will quickly tire. In the recent Practical Boat Owner trial it was concluded that it was necessary to reduce the boat speed to as low as two knots within one minute of going over the side to give the MOB any chance of survival!

So, if prevention is the cure where do we start?

You’re two-up and most likely doing three hours on and three off and that’s hard work! So, before you’ve even left the dock you’re going to put systems in place to make life as easy as possible while on passage and most definitely to limit the number of times you’ll need to leave the cockpit. Every time you leave the safety of the cockpit you’re increasing the risk factor. Many boats are set up for hoisting and reefing sails at the mast – run as many of these lines as you can back to the cockpit; halyards, reefing lines etc.

Genoa cars should be on pulleys so they can be adjusted from the cockpit, if you don’t have a roll away main then a stack pack to “tame the main” and boom preventers to immobilize the boom. A powerful autopilot or Wind vane to do all the hard work steering the boat without depleting the crew’s energy levels, is vital, because lack of sleep will make even an experienced sailor make some incomprehensible decisions.

We’re also pragmatic enough to realize there will be the occasional time when we will need to leave the cockpit so before leaving the dock we will run jack-lines to allow us to tether on while moving around and working on deck. Traditionally these lines have been run along the side decks, using webbing so they don’t roll under your feet. I’m not a fan of jack-lines on the deck, for a number of reasons; I prefer using a three-point tether with the short tether, less than a meter in length, clipped to the jack-line.

With the jack-line at your feet the tether angle is too steep and the clip doesn’t slide easily and there are lots of other lines and gear to get tangled up on. The longer the tether and the closer to the gunwale of the vessel the further you can potentially fall. I prefer to run the jack-line further inboard and if possible at or about waist height. This can be problematic on some boats but the idea is to be able to lean back while tethered and stop before you reach the lifelines. In this position flat webbing, which stretches when wet or under load, may be replaced with braid or wire.

Why a three point tether? Simple – if for any reason you need to unclip to move about, it’s a simple matter to use the second clip so you’re always connected. Also the longer tether is good in the cockpit where you can clip on and still have some freedom of movement.

Next up is Safety Gear

Many countries don’t require the same (or in fact any) level of compliance (New Zealand is the exception) for cruising yachts. For extended coastal and offshore the “Green Book” should be regarded as the minimum standard.

Positioning of the safety gear is also a consideration and much to do with this will be influenced by your watch rules. The primary focus should be to keep everything close to hand and easy to deploy. There’s no point in having your Dan buoy or life sling for example on a centre cockpit boat on the back deck where the remaining crew needs to leave the safety of the cockpit in order to deploy it, let alone the time and distance this will take. A boat doing six knots will travel 3m every second. 10 seconds and you’re 30m away, one minute and your 180m from the MOB. Try it with a cockpit cushion or a fender and see how close you can get your Dan buoy or Life sling to what you throw over from the mast to simulate an MOB.

Setting up your watch rules and making sure they’re adhered too is perhaps the most important method of mitigating risks. For us it’s simple, if there’s a need to go on deck, first, a quick assessment is needed. If it’s dark, is it necessary to do it now? A quick tuck in the main before dusk for example, will do little to your speed and if the wind does get up furling a reef in the jib, which can be done from the cockpit, should be enough. For something that’s broken, can it wait till it’s light? Particularly in heavy conditions working on the fore deck for example is much easier in daylight, if necessary, heave the boat too until dawn.

Once the decision to go forward has been made we adhere to the following:

If it’s rough, turn the boat off the wind and roll away the foresail.
Most of the likely reasons for leaving the cockpit, other than usual sail work, are due to chafe, shackle pins coming undone and one many don’t think about before a passage, the anchor self releasing. While the conditions are good a regular inspection for these issues will often save you from deck work when the conditions are less favourable.

There are times when the conditions are so easy that deck work is easy but still follow the Watch Rules and boys, under no circumstances should you relieve yourself at the rail.

As with all safety gear, read the instructions and practice your procedures.

So the Worst Happens!

Think for a second what your chances would be if you went over the side with no harness/lifejacket and no one else to see you fall or hear the splash. It’s a big ocean and I’d say zero was the probable number. Even in calm conditions follow the rules, even if you find tethering a pain at the very least wear your harness. Why? Simple your chances of one, being found and two, being recovered are much higher.

There have also been some leaps forward in safety gear recently: auto inflation of harnesses and many recovery devices; the advent of AIS and personal location devises using this technology; torches and strobes that are small enough to fit into your harness and self activate – all will improve your chances of being located.

AIS, in particular, has seen many changes made to how we locate a MOB. Previous satellite technology in PLBs (Personal Locater Beacons) communicated your distress to the closest SAR coordination centre, not much use to those on the boat. A personal AIS beacon fitted to self activate with your harness life jacket deployment will, upon getting a position fix, transmit your MOB status and exact position etc. to any AIS devise that’s close enough to receive the signal. We trialled one of these units at sea in a recent rally and had six boats close enough to receive the alert and assist in search and recovery if needed. Your chances have just gone up exponentially, unless of course your harness is still in the cockpit locker!

The ideal gear to have incorporated in your harness: a webbing cutter; a personal self-activating AIS beacon; and either a MOB torch or self-activating micro strobe. All will assist in finding you, now all that’s left is to get you back aboard, and that’s an article for next month.

About the Island Cruising Association

Their motto is “We make Cruising more Fun” but there’s a serious side too. ICA offers an ever-growing knowledge base of cruising resources and information specific to Extended Coastal (New Zealand and a developing section on Australia) and Offshore, with an emphasis on the South West Pacific. They offer a wide range of fun events, cruising rallies, training, practical demonstrations, on the water preparation and backup to assist cruisers to “get out there”. Upcoming events include the CPS (Cruising Prep Seminar) in Brisbane and Cairns in June/July 2016; Multihull Solutions Sail2Indonesia Rally and Doyle South Pacific Rally in June 2016; and the Doyle Pacific Circuit Rally on again in 2017. It’s all happening!

Membership in the Island Cruising Association is NZ$65.00 per year and membership gives you access to the entire knowledge base. www.islandcruising.co.nz