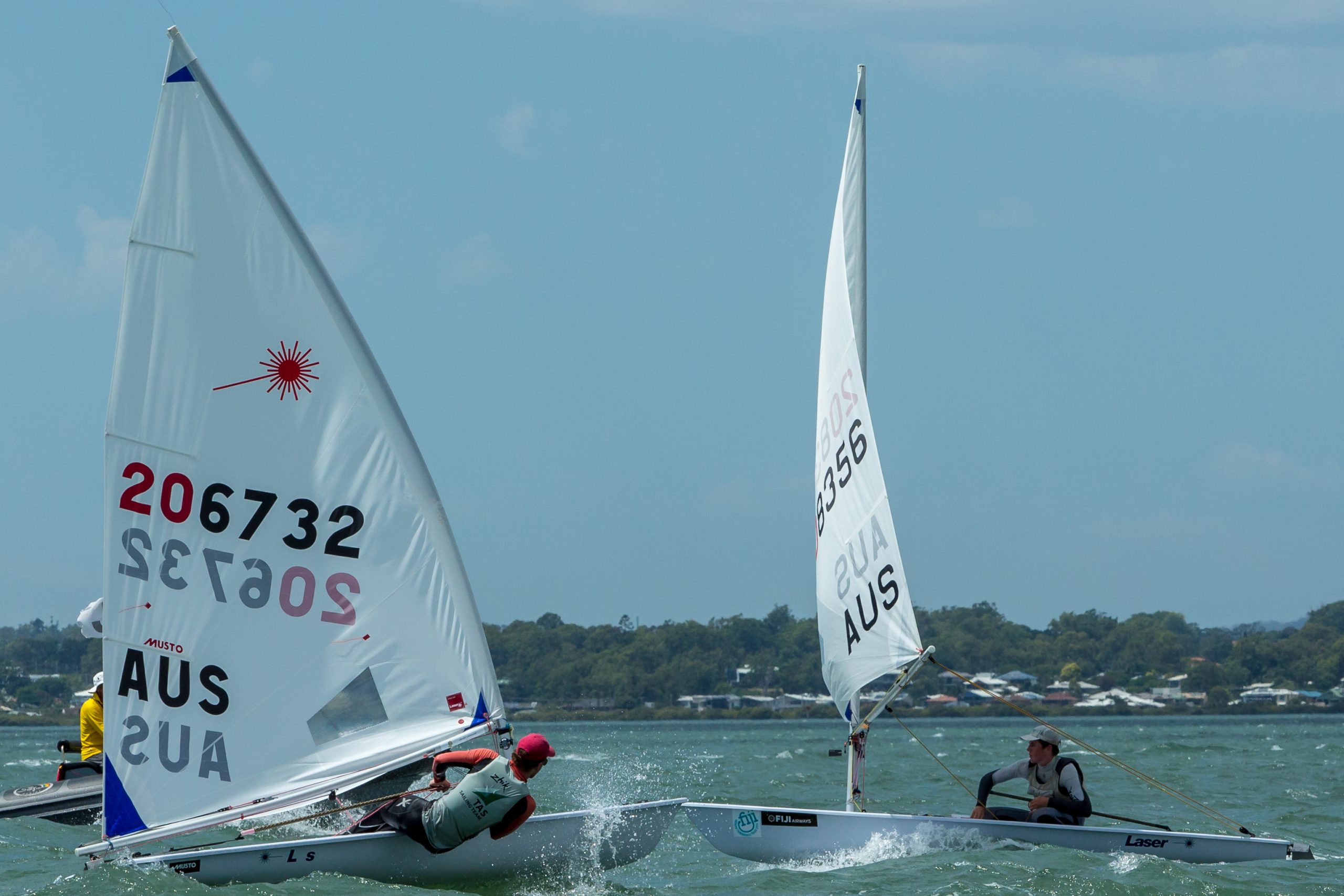 Glory is for the taking in the Laser Radial, Laser 4.7, 29er and Bic Techno 293 classes, with Youth Olympic Games qualification among the lures.

“It was a bit different to the other days,” Tom said. “It wasn’t that breezy but because it was a westerly the breeze was all over the place. We went out there and it was an upwind all the way up the course and then a complete 180 back from the north-west.

“I was happy with the first race [in which he came first]. Just had to sail the long tack. If you had the option to tack you were pretty clear, but if you couldn’t tack you were stuck on the knock and there were pretty big shifts.

“The second one I had a pretty poor start and didn’t get the option to tack early, so I lost out there. In the third race, I came back and got another fourth, so that was all right. I was just trying to keep it consistent, especially on a day like today.”
The boys’ 29er remains in the balance, with Henry Larkings and Miles Davey, and Lachlan Brewer and Max Paul, locked on 17 points at the head of the fleet.

The male competition in the Laser 4.7 is another set for a tight finish, with Michael Compton (19 points), Stefan Elliott-Shircore (21) and Boston Cortis (24) all in the hunt.

In the Bic Techno 293, William Grimshaw has pinched the lead on a countback from Indonesia’s Hazel Devananda, each on seven points.

Female divisions seem more clear cut, except for the Laser Radial stoush, in which Paige Caldecoat leads by a solitary point from Maddie O’Shea, and the 420, where Matilda Richardson and Lily Richardson lead Rebecca Hancock and Rhiannan Brown by eight points.

“We’re really good friends with the other girls,” Matilda said. “So we’re not going to take it too seriously (tomorrow), just have a lot of fun and hopefully come away with the win.”

In the girls’ 29er Grace Powers and Kate Richardson are at the front of the female fleet, 14 points clear of Madeline Sloane and Madeleine McLeay.

Sylvie Stannage, in sixth overall, is on top in the girls’ Laser 4.7 division, 22 points clear of Sarah Gleeson.

Lauren Whitford is the leading female in the Bic Techno 293 while, in the Bic Techno Plus class, New Zealander Max van der Zalm’s race 7 bullet consolidated his lead to five points over Australia’s Alex Halank. In the girls’ division another Kiwi, Veerle ten Have, holds a 20-point break over local Hailey Lea.

NSW crews continue to dominate the Nacra 15, where Will Cooley and Evie Haseldine hold a four-point gap from Tom Crockett and Tahnie Cadecoat.