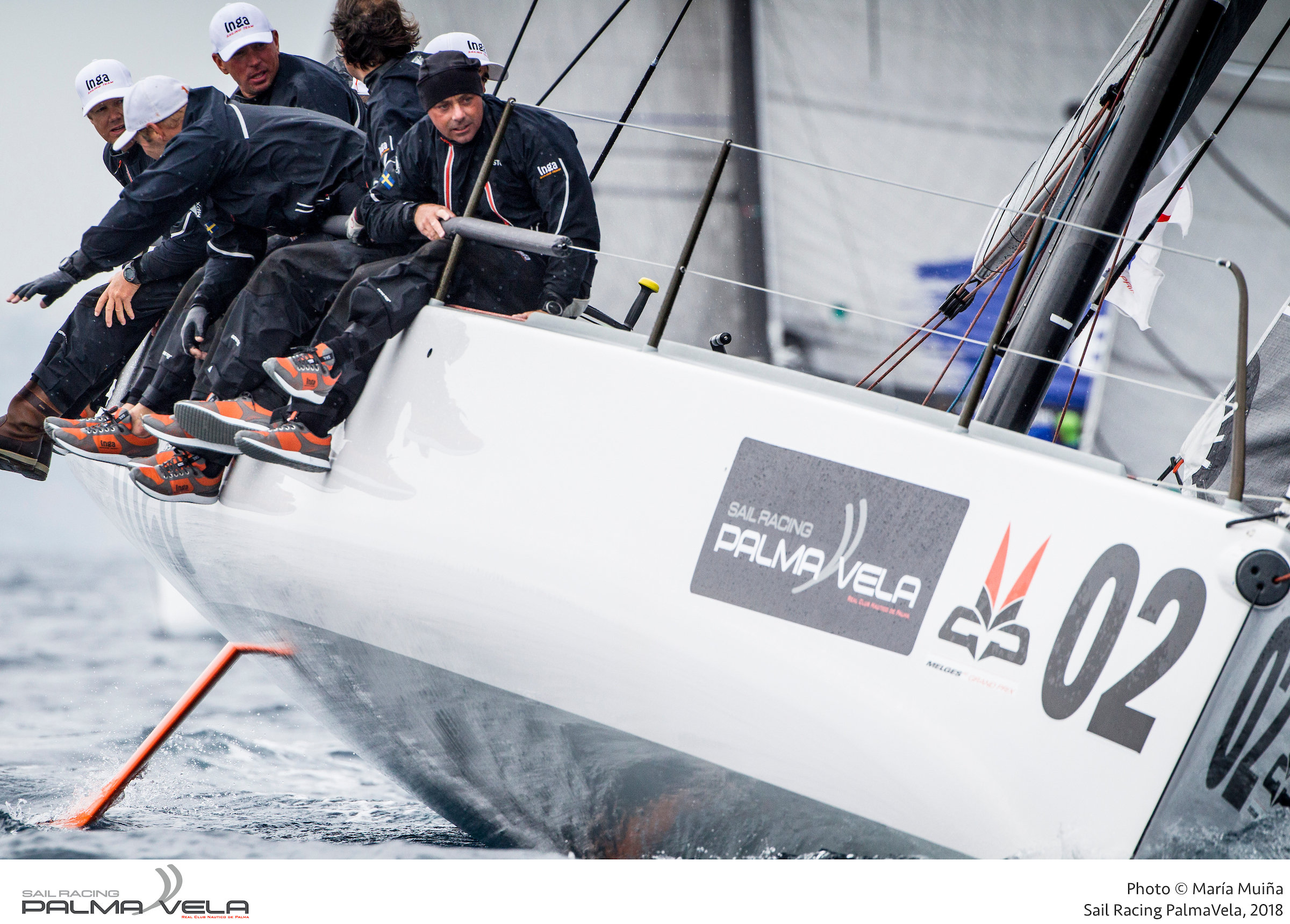 Gentle, challenging breezes on the Bay of Palma meant the outcome in many of the 14 classes at the 15th edition of Sail Racing Palma Vela went to the wire. It was down to how the different teams dealt with the pressure performing in the fluky, shifty winds which determined which teams collected the winners’ trophies at this traditional Mediterranean season opener.

In the highly competitive TP52 class it was a pin sharp, near perfect start from Azzurra which largely determined that they could hold on to win the Palma title while in the Melges 40 class which is making its regatta debut, it was all down to the last turning mark and the last run. At the last mark the long time class leaders Inga from Sweden were last and looked to have ceded the regatta win, but last gasp gains, rising to third in the five strong fleet was enough to rescue their class win.

In the ClubSwan 50 class the Earlybird crew kept their cool and on top of their maths to ensure they protected their points cushion to retain the PalmaVela honours they won here last year, a feat which was repeated in the Swan 45 class by Elena Nova, Christian Plump’s crew which won for the sixth successive year. So too in the Wally class, the crew which went on the water this morning with the lead, Magic Blue, were able to hold out to score victory in the light winds.

Winning at Sail Racing Palma Vela is often a good indication of form for the coming season the TP52 class. In 2015, the last time a new generation of boat was built, Azzurra won and went on to win the 2015 52 SUPER SERIES. In 2016 Quantum Racing won PalmaVela and took the circuit title. With seven new boats racing on the Bay of Palma these last four days, in winds of two to 22kts, Azzurra proved the value of being first boat launched in Europe. If there is a challenge is slotting in Olympic champion Santi Lange in place of long time tactician Vasco Vascotto it was not obvious. Outwardly the transition appeared seamless, not least today when they had to perform to win. They had an excellent start which allowed them to control the fleet early. Going on to win from Sled and Quantum Racing, the Roemmers family’s crew won by four points for Quantum Racing which was only sailed for the first time a couple of days before the event started.

The Olympic gold medallist and Rolex Sailor of the Year clearly thrived under the pressure he felt at his first regatta on the 2017 championship winning Azzurra, “I am really happy, obviously there was pressure for me, there is always pressure but it is a nice pressure, especially because I know the team have been working so hard through the winter and they did an awesome job to get the boat in the water early. It is all so well organised that you don’t want to make mistakes. The others will catch up and we will have to keep getting better. It is all about keeping learning, don’t think that because we have won this regatta we are ahead of the pack, we have to keep pushing ourselves. It is all about the small details, keep focused and everyone keep working hard.  Everyone on board knows the boat, they know TP52s inside out, the boat is well prepared.”

Inga From Sweden had to wait until the last run before they could finally be sure of winning the Melges 40 fleet. At the last turning mark they were fifth and had dropped to third overall. But they chipped away down the last run and were able to cross the line third to secure the class win. With a win in the final race Dynamiq-Synergy Sailing Team were able to finish second by two points. The class sailed nine of their planned ten races. Cameron Appleton, tactician on Richard Goransson’s winning Melges 40 commented, “It has a been a long and challenging regatta, long days to get nine of the ten races away in tricky conditions, being mixed up with the other fleets has been challenging at times. But we had such tight racing. During the last race we were third overall, we were second overall and finally first overall. We lead all week but it has been hard. We have a great group of guys and our owner Richard is great. We step things out a little bit and are developing little by little. When you get out in front it is a different race. We had some ups and downs, getting tangled with boats in the other classes, but we plan and we plan and we make sure we put all the right steps forwards. It has paid off. It is a new class and everyone is still learning it.”

Hendrik Brandis Earlybird closed out the ClubSwan 50 win with a nervy fifth in the last race, enough to see them win by just two points from Mathilde which has Britain’s Leigh McMillan as tactician.  Majorcan Manu Weiller, deputising for Jochen Schumann as tactician on Earlybird clearly did an accomplished job. He said, “It was such a challenging way to finish for us. We had to sail very safely and not be last which in this fleet is not that easy. The only way to do that is to attack and sail well. And so as tactician I really had to do that balance between attacking and defending. We sailed quite well in the middle of the fleet. I did the maths and we were OK. The thing is we saw one boat sail away three hundred metres ahead of in three minutes, it was that kind of day. So we could have ended up last. We played it safe. It was my first time ever on these ClubSwan 50s but I have sailed a lot on Soto 40s, GP42s, Melges 32, this is a sportsboat with some displacement. But the concept of the boat is fun and the whole one design thing is such fun. I love it.”

In the Wally fleet is was the evergreen Magic Blue of Toni Cacace which won for the first time ever. Tactician Flavio Favini was delighted to win, “We have been third and second so winning here is great. We were able to sail our own races, making sure we got a clear lane off the start line was important for us. Then, keeping away from the others and sailing in clear air was key. We have a good boat, it may be older but it goes well. We had a good week with all races good except yesterday when we were caught out when the wind died and it was glassy, glassy calm.”

If winning at PalmaVela is a new experience for the Magic Blue crew it is something which has become almost commonplace to the crew of the Swan 45 Elena Nova. This may have been their sixth time but the owner-driver Christian Plump acknowledged this win was one of the toughest: “That is the sixth time we have won Palma Vela. It is such competitive racing in this class and this was the most difficult time. The difference between the first the last boat is no more than ten lengths. It is such fun. I am so relieved to have won. We have only won Copa del Rey once and this year we will be back to try and do it again.” Said the German owner. Their win and that of Earlybird puts Germany as leaders of the Nations Trophy Mediterranean League.