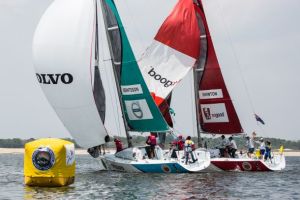 Johore Bahru, Malaysia (24th January 2016): Twelve of the world’s top match racing teams are getting ready for action at the Monsoon Cup in Malaysia, the season finale of the World Match Racing Tour. Now in its eleventh year, the final event of the World Championship takes place from 26 to 30 January, and sees the top three almost tied on points at the top of the Tour leaderboard.

After four Championships events around the world, just five points separate Ian Williams (GBR), Bjorn Hansen (SWE) and Taylor Canfield (ISV) as they arrive in Malaysia for a thrilling battle on the fluky Straits of Johor, the narrow stretch of water that divides Malaysia and Singapore.

Having only raced in Johor last year for the first time, the tricky winds are still somewhat of an unknown quantity. The weapon of choice for this regatta, the FarEast 28, has never been raced on the Tour before, so getting to grips with these lightweight four-crew boats will be a challenge in itself. Williams acknowledges that arch-rival Canfield and his US One team could have a slight edge in the smaller-than-usual keelboat. “Generally the younger guys are more suited to the smaller teams and smaller boats,” admitted the five-time World Champion from Great Britain. “But saying that, we’ve won plenty of four-man regattas in the past and I’m sure we can do it again.”

Williams was the absolute master of the tricky conditions last year, winning all but one of his 20 matches on the way to winning his third Monsoon Cup and his record fifth World title. However the US Virgin Islander Canfield, who won the Monsoon Cup in 2012, has unshakeable self-belief. “Our team has always been great at adapting. We’re expecting the conditions will be light and shifty for much of the regatta. Even when we’re behind in matches, our team puts their heads down and fights their way back.”

Bjorn Hansen’s record at the Monsoon Cup is not strong, although he and his fellow Swedes on Nautiska Racing have had a sensational season during 2015 including victory on home waters at the Stena Match Cup Sweden. As new rumours surface about an ABBA comeback in 2016, could this be the year of the Swede? Others that have performed well here in the past include Keith Swinton (AUS), light airs specialist Eric Monnin (SUI), and Phil Robertson (NZL) who prevailed over Williams in a windy Monsoon Cup final in 2013.

Fellow Kiwi Reuben Corbett has notched up a solid season on the Tour so far, while Sweden’s Johnie Berntsson is one of the most experienced match racers in the line-up. The young Vikings, Joachim Aschenbrenner and Nicolai Sehested, are looking to pillage from the more established teams, and Sehested has already bested Williams 2-0 in the final of the Energa Sopot Match Race last summer in Poland.

The local Asian teams skippered by Maxi Soh from Singapore and Hazwan Hazim Dermawan from Malaysia will find it tough up against the more experienced visitors, but both skippers are capable of causing upsets and will be looking to notch up some wins against the overseas competitors whilst adding valuable world-level experience to their match racing repertoire.

On shore in the elegant surroundings of the newly developed Puteri Harbour, there are all kinds of fun things for visitors and spectators to do, including a Virtual Reality Sailing Simulator at the Social Media Booth.

The opening ceremony takes place at 2.00pm on 25 January followed by a Pro-Am race. The racing will be streamed live each day from 1000-1700 with commentary from Simon Shaw and Tucker Thompson, and short daily reviews will be available on the Internet. There will be a two-hour live television broadcast covering the finals on 30 January.

From a Tour Bonus of US$ 440,000 – the largest across the breadth of professional sailing – the World Champion and winner of the 2015 World Match Racing Tour receives US$80,000, the second placed finisher US$70,000, with prize money on a diminishing scale to all eight Tour Card skippers.

Follow all the action on LIVE streaming from 26-30 January at www.wmrt.com

For the latest standings and scores on the 2015 World Match Racing Tour leaderboard, go to http://wmrt.com/result/leaderboard.html.