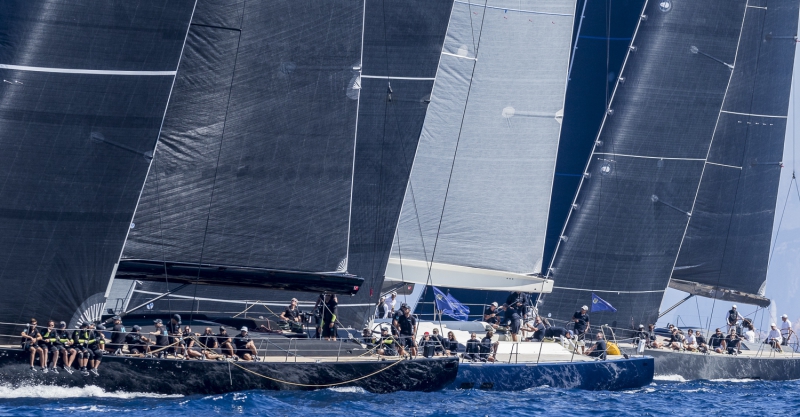 Magic Carpet 3, the Wally Cento, won the coastal race after establishing an important early lead over their bigger 107ft rival Open Season well before the top of the first beat to Monaci. But Open Season then responded with a near faultless windward-leeward to beat Lyra, the Wally 77, to second and Magic Carpet 3 to third. After three races Magic Carpet leads the Wally standings by two points.

Light breezes are acknowledged to suit the 33m WinWin in Class A, and the crew kept the boat moving smoothly through the gears as the wind rose and fell slightly along course up to their most windward turn and back. With Mark Sadler calling tactics and Marc Lagesse navigating, they worked the preferred side of what proved a very one sided opening beat, and then made a neat gain holding well to the left on the approach to the leeward turning mark off Secca Tre Monte and went on to win by over two minutes ahead of Saudade.

Now counting a 1-5-2 Saudade, top boat overall at last year's Loro Piana Superyacht Regatta, sits on top of the Superyacht leaderboard but with just one point in hand going in to Saturday's showdown.

“The windward leg was very one sided with the breeze filling in from the right. At the top of the island where we turned I think we maybe saw eight knots so it was pretty light. I think we did well to have clear air for a lot of the time and to go well on the long extended legs without too many manoeuvres, the boat really goes well in the light stuff. It does go well in all conditions but especially in the light. Tomorrow will be light again and hopefully we can creep up the leaderboard a bit more.” WinWin's tactician Sadler explained.

In Division B there was a well-earned triumph for Whisper, the 23.95m Southern Wind which is on charter to YCCS member Paolo Scerni. A regular racer on these waters with the Swan yachts named Kora, Scerni was encouraged to take part in this Superyacht regatta and a win today makes that choice all the sweeter.

“For Whisper we did not expect such a great result. We had a great start and the first decision was very good. We stuck with a gennaker not a reaching spinnaker after Monici. We went low and fast against our rivals My Song and Grande Orazio and that was our winning decision.” Said Andrea Casale, the Whisper tactician. “The owners have had a lot of Swans and they have won a lot with Kora and so they wanted to do this regatta.”

The leaderboard in Division B now has  Grande Orazio sitting firm in the top spot – with two bullets and a second place – ahead of Whisper and My Song respectively. Only 4 points separate the top three in this hotly-contested category.

The first beat to Monici was decisive for the Wally class. The breeze gentle filled from the right and Magic Carpet 3 going right early were well positioned to profit, so leading Open Season down a reach in soft airs to Tre Monte, then east out of Bomb Alley and were only passed by the most leeward turn at Moriotto and Soffi with Open Season crossing the finish line one minute and 43 seconds ahead of Magic Carpet 3, correcting to a win by one minute and 17 seconds.

The windward-leeward contest – the only one so far for the 12 strong fleet – started in a light 6-7kts breeze. Lyra made a clean start at the boat end to earn themselves a nice lane of clean air, away from the main traffic. Open Season lead Magic Carpet at the top mark and extended to win but Lyra hung in for second, splitting the two bigger boats.

Ian Walker, Magic Carpet 3's tactician summarised “We probably sailed one of the best races we have sailed together in the first one, we had a great start, we went the right way, the boat handling was good and we had the one slight altercation with Open Season but we managed to hold our time on them and the small boats. The second race they sailed perfect race. They won the start and from there it was just about trying to keep the distance between us as small as possible. It is kind of bizarre fight with Open Season because we race each other but we can't afford to match race too much or we lose too much to the smaller boats so it is a very passive match racing dance.”

Racing concludes Saturday 11 June for the Loro Piana Superyacht Regatta with one Coastal Race scheduled for the Classes A and B and windward-leeward races for the Wally fleet.

A packed social programme complements the on-the-water action at this event and the fun continues this evening with a Sunset Party at Phi Beach while proceedings will wrap up with the final prize giving at the Yacht Club Costa Smeralda tomorrow.