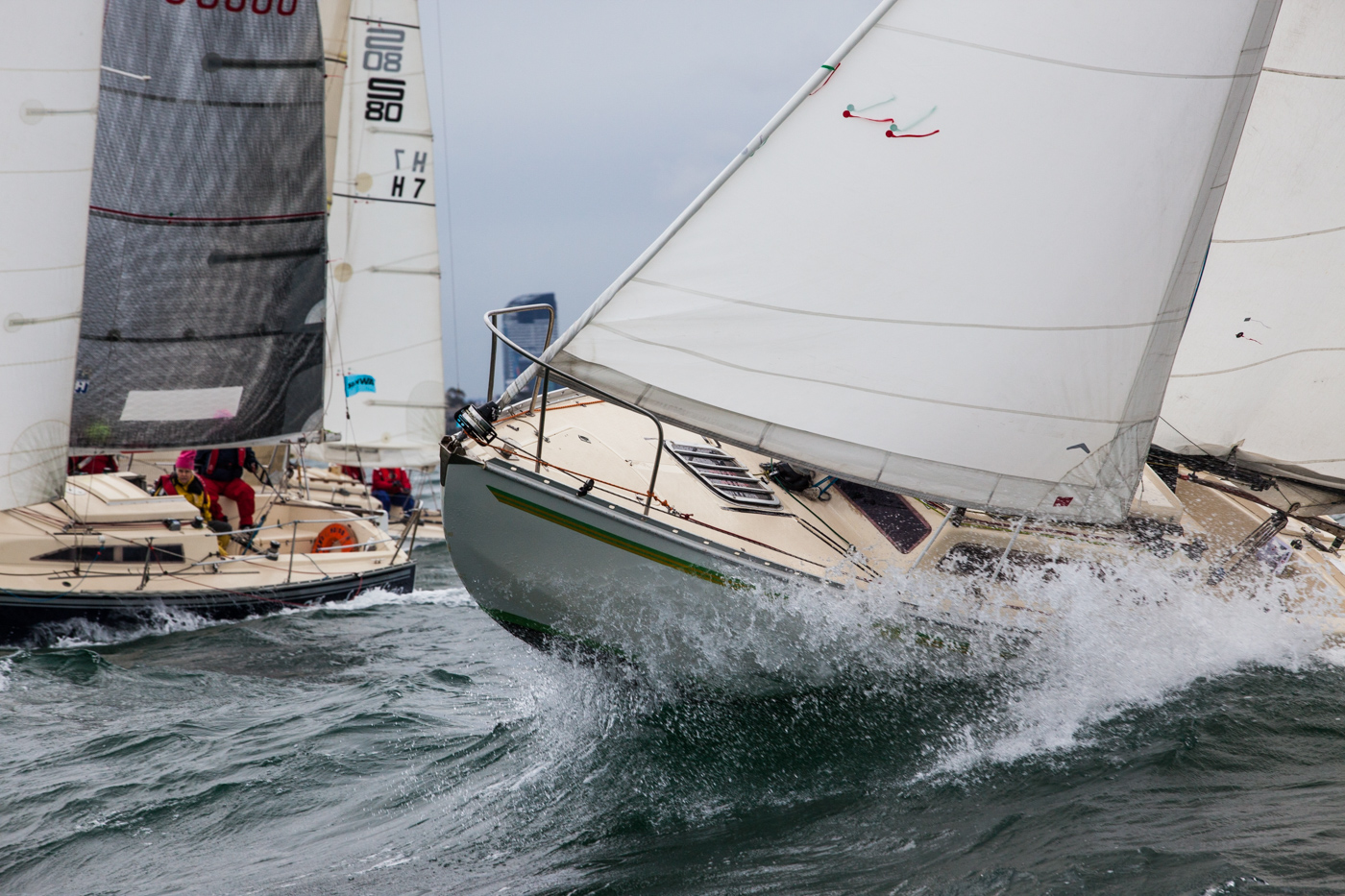 26 boats hit the water for the 26th year of the Australian Women’s Keelboat Regatta today, 11th June 2016, for their first day of racing. In typical Melbourne fashion each competitor prepared by gearing up like the Michelin Man so as not to freeze from the prevailing winter winds. For the handful of competitors who fell overboard this merely provided an added layer of buoyancy.

Despite half the fleet being unable to move in a humanly manor racing began with the intention to complete three races in lieu of tomorrow’s predicted light winds. Race management were optimistically hedging their bets that an incorrect prediction had been made which occurs more often than not in Melbourne. Strangely, the Melbourne weather predicted did eventuate and only two races were completed as a strong 35 knot front came through

Two divisions, multiple classes and seven represented states comprised the overall pool of competitors, some of whom have never sailed Keelboats before. It’s pretty clear the AWKR is achieving their vision of being able to provide opportunities for all women to explore, participate in and thrive at competitive Keelboat sailing.

Race one began on time in a solid 15 knots from the North West. Some boats tried to brave the increasing winds by keeping their mains up but those who reefed benefited significantly.

Local Victorians on ‘More Noise’ skippered by Stephanie Strong had a solid start in the Division 1 fleet and held her position well for the race, taking out 1st in AMS and IRC (certainly someone to keep an eye on over the next couple days). Port Philip Women’s Championship Series winner in IRC, AMS and PHS, Monica Jones on Salamander III, had a conservative start that seemed to struggle to get a lane, yet in fact turned out that everyone else was struggling to keep theirs. By ‘sticking to her guns’ Jones slipped through to a solid position midway up the first beat and finished 3rd in IRC. A strong and well executed downwind by the New South Whales team, ‘How Bizarre’, led by skipper, Nicole Butcher, gained enough ground to secure their win over the line and lock in a 2nd in AMS and a 4th in IRC.

The Division 2 fleet played a cautious start followed by a drag race to the first shift half way up the beat of the first leg. This shift indicated the next stage in the slow southerly shifting breeze. Local Victorian team, ‘Up n Go’ skippered by Britta Baade, sailed fast in the top two thirds of the first beat leading Division 2 boats around the course. After a well organised downwind, Baade sailed over the line first securing the team a 1st in AMS and 2nd EHC.

Race two saw the South Westerly shift settle and increase in pressure, livening the course and bringing short, sharp chop with it. Those who hadn’t reefed joined the rest of the regatta and set themselves up for a ‘breeze on’ race. It seemed that those who could focus on quality manoeuvres through clear communication and creating time for their crew did well in the heavy winds. Those who let the inevitable nerves overwhelm them seemed to make last minute decision and rush manoeuvres.

Kellie Knowles, skipper of ‘Take One’, blitzed the second start with a well thought out plan that involved getting clear air by slightly separating from the rest of the congested fleet and starting on time. Her time on distance was flawless and her start was executed perfectly. Similarly on ‘Absolut’, Colleen Darcey in Division 1 took a conservative approach to the whole race emphasising the need to reduce the chance of error through unnecessary manoeuvres. This contributed to why she and her crew won IRC, AMS and EHC in race two today. Darcey explained:

“We really pushed ourselves today; it was challenging but great fun out there. We were down one crew which didn’t help but it just made us work a little harder. Being from Tassie we’re used to the heavy weather but had to adjust our sailing to the slop and chop Port Philip brings. We realised we needed to console our urges to play every shift and stick to conservative sailing. We’re certainly looking forward to adding more tactics and strategy to our game plan tomorrow.”

Despite some carnage while racing it was pleasant to see smiling faces and laughter throughout the fleet. Everyone is there to have a good time and to learn and with such dedicated and generous staff, volunteers and race management they can certainly fulfil these goals.

Focus turns to day two of the AWKR with the daily briefing being held at 0800 and racing scheduled to begin at 0955 again.