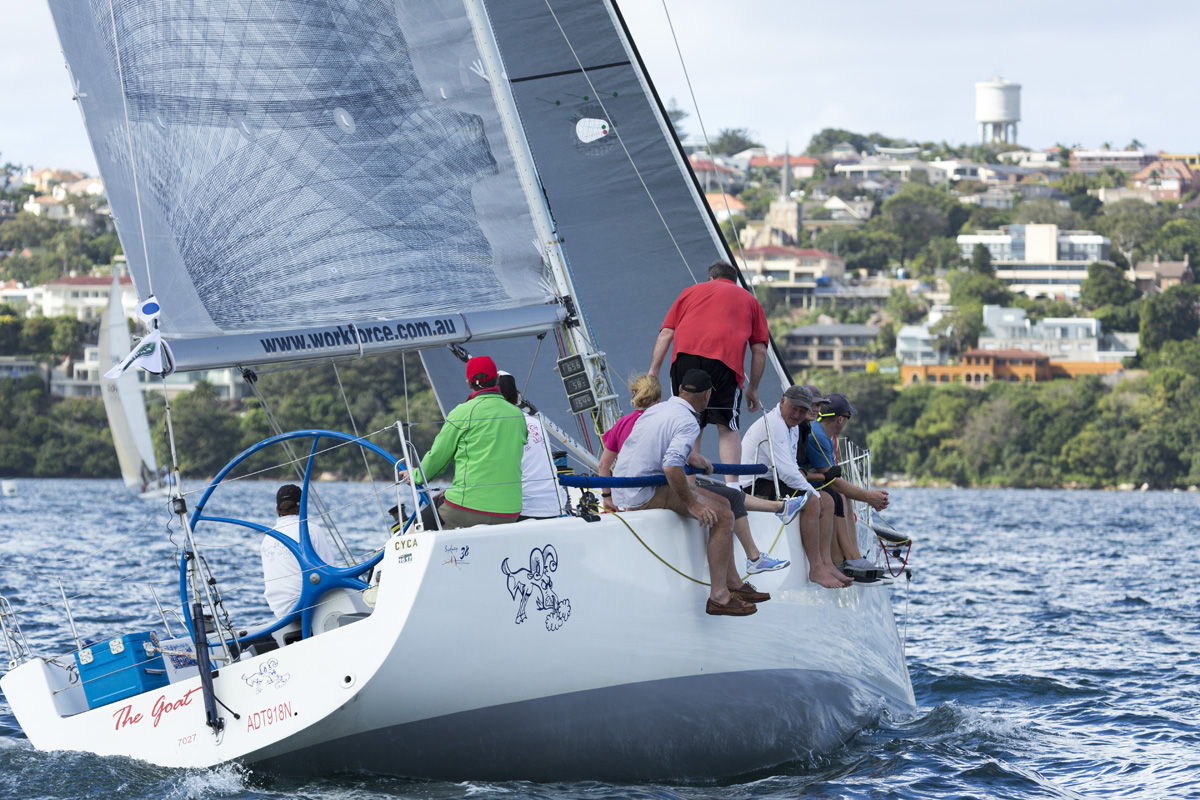 The first pointscore race of the CYCA Winter Series was greeted with sunny skies and building south, south-westerly breeze. The 95 starters jostled for the final placings in each division, where just seconds separated some.

Division A1 was one of the most hotly contested, with the top six boats finishing within two minutes of each other. However, it was Sebastian Bohm’s The Goat who claimed victory in Race 1.

“We started first in our division, and managed to stay ahead for almost the entire race,” commented Bohm. “The battle against Duende was tough, they managed to squeeze inside us at one stage, but we got the lead back before the finish.”

The Goat’s win over Triton (David Goetz) by 46 seconds and Damien Parkes’ JV52 Duende a further 26 seconds behind in third place, was as close as it gets.

“Once we crossed the line, we all looked back and everyone was just behind us. It was a tough race,” he continued. A mere three seconds later in fourth place was Tony Kirby’s Patrice.  Steven Proud’s Swish sailed across the line 9 seconds later in fifth, followed by Paul Clitheroe on Balance in sixth, by a further 23 seconds.

“We were expecting the wind to die down a little throughout the day. Instead it increased and stayed at around 10-15 knots all day, which was great for us as the boat loves those conditions. There were only nine people on board today, but I think it actually helped us win in the end.

“All in all, it was another great day on the harbour for the Land Rover Winter Series and we’ll give it another go next week, although I imagine we’ll have a very different handicap,” ended Bohm.

The winner in Division A2 was Warwick Sherman with his Ker designed Sydney GTS 43,Occasional Coarse Language 2 by over five minutes. Craig Neil’s Elena Nova was 15 seconds ahead of Laurence Freedman’s Espresso Forte in third.

Arch Rival sailed a race of near-perfection in Division B, taking out the win by just 17 seconds ahead of Peter Bush on Last Hurrah. It was a few minutes later that Matt Wilkinson’s Foreign Affair crossed the finish line to round out the top 3.

Arch Rival skipper Steve Connors, labelled it as a “Fantastic day all round, with beautiful conditions and a great race.”

“We just didn’t make mistakes today, which was good to see for our boat. We were one of the only ones to start in our time slot, so it was all smooth sailing. We sailed exactly like we should have!”

“Our new sails for this season gave us a bit of a lift in the moderate conditions, and the win makes it even more of an exceptional day.”

In the Sydney 38 Division, The Goat claimed the double victory winning on both scratch and PHS. On scratch, it was Peter Messenger’s Utopia in second, followed by Richard Holstein’s Next. Shine On, skippered by Phil Herscovics, placed second in PHS, and Richard Williams’ Calibre in third.

The Land Rover Winter Series will continue next Sunday starting from 11:30am on Sydney Harbour.

Prizes will be awarded to the yachts placed first, second and third in each division and include exclusive CYCA Winter Series merchandise.