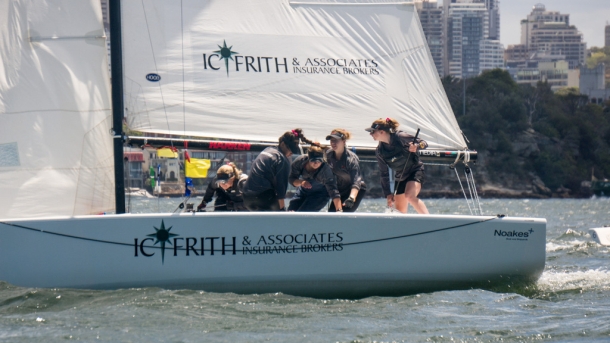 In contrast to the final racing in Perth which was curtailed by light winds, today’s opening flights were cut short as a strong southerly wind freshened to more than 25 knots, gusting to 30 knots and more.

Steele and his 36 Below crew from the Royal New Zealand Yacht Squadron won two of their three flights today but heading the leaderboard after the limited first round robin were  Australians Jay Griffin from Sydney’s Cruising Yacht Club of Australia and Sam Gilmour from Perth’s Royal Freshwater Bay Yacht Club, who each came through unbeaten with five wins each.

The 10 young crews from Australian and New Zealand yacht clubs excelled in their sail handling skills today, sailing Elliott 7 sports boats with asymmetrical spinnakers as the southerly built during the day.

“It was a day of fantastic sailing in fresh to strong winds, but we managed to run only seven flights as the breeze became really strong,” the Royal Sydney Yacht Squadron’s youth sailing co-ordinator Mitch Watkins said after race officers hosted the AP/A signal about 3.30pm.

Steele,  22,  won the Warren Jones Regatta at his third attempt and this is also his third bid to win the Hardy Cup,  after a third and a fourth in previous events.

“Conditions were quite challenging today, not only in the strength of wind but also in the change of boats,” Steele said after the racing. “However,  the Elliott 7s with their asymmetric kites are good boats to sail.

“In the final race today,  with the wind 25 knots and more,  we elected not to hoist our gennaker and we had much better control than some of the others who tried to fly them,” Steele added,

“Within the Harbour the water was relatively flat and, apart from the last race, it was very much tactical match racing.

“Our best win of the day was against Matthew Jerwood from WA who finished fifth in Perth who was leading after the round-robins of that regatta,” Steele said, adding that they had won a couple and lost one of their on-the-water protests.