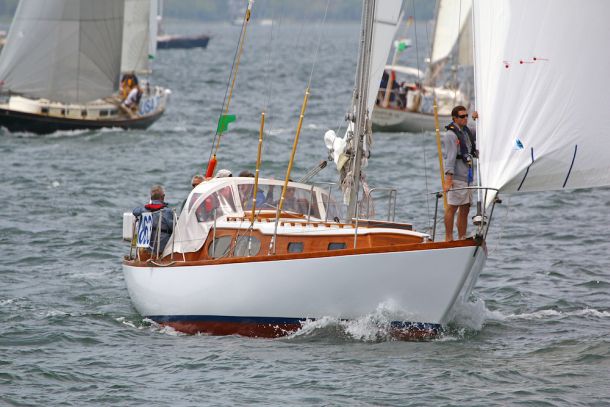 RHADC, Bermuda- June 24, 2015: ‘TI’ skippered by Greg Marston can now be confirmed as the overall winner of the 2015 Marion Bermuda Race Founders Division.  As expected yesterday, the leader for the overall corrected time trophy— The Founders Trophy— moved from Class C to Class D when ‘TI’, an Alden Mistral 36 sailed under Celestial Navigation by a family crew, grabbed the lead for the big prize. Her corrected time was 86hrs :35min :56sec.

The crew of ‘TI’ consisted of the skipper Greg Marston, navigators Andrew Howe and Chase Marston, Watch Captain Peter Snoops, and crew members John Omeara and Jake Marston. They are all related, and all are from Falmouth Maine.

On Monday, ‘Mischievous’ sailing for the Massachusetts Maritime Academy grabbed line honors in the 2015 Marion Bermuda Race with a splendid performance. She crossed the finish line at St. David’s Lighthouse Bermuda during the twilight Lighthouse Committee cocktail party at the finish tower on Monday evening at 6:42 EDT.

‘Spirit of Bermuda’, the Bermuda Sloop Foundation’s sail training vessel chartered by Jim Butterfield for an employee team building adventure, had a strong fourth for line honors and first in the Classic Division. This is her best showing ever in a Bermuda Ocean Race by ‘Spirit of Bermuda’.

Much of the dock talk among sailors was about the heavy weather they experienced in the heart of Gulf Stream and along the North wall.
Laurie Fullerton talked with several sailors:

It was about 1700 hours and we were at LAT LONG 38 West 39 North when the winds went from 30 to 50 knots just like that. My son was on deck as we tried to get the double-reefed mainsail down when suddenly we broached.

The boat quickly righted itself but it was a frightening moment. When the 40 knots went to 55 knots, we tried to get the main down and the boat broached. We were emotionally frozen and the noise was overwhelming.

The rain was horizontal, the sea became a grey steam. I was scared. My son was on deck. But, when it was over we just bare-poled it for about an hour and collected ourselves. We lost a lot of time and are disappointed as we had been sailing so well.

It was a difficult situation as we had two low pressure systems and tropical storm Bill coming. We had 40 knots of wind for serveral house. Then everything went into the 50s and we simply waited it out.

Did everything go as planned? No and Yes. Ocean racing is very different to any other kind of racing. It is a totally different animal. You have to plan it out and our goal was not to use the Gulf Stream as an advantage but instead we wanted to get through the thinnest part of the Gulf Stream and get to the other side of it.

We had storm sails up and a double-reefed main when the gale hit. We felt like the sails were simply shredding. We had one downed crew with seasickness but we rode it out. We had a foul current we were against most of the way. But we got through it OK.

On Sunday afternoon we had what seemed like 10 squalls in a row.  We had a double-reefed main and a reefed foresail. But, overall Sunday was the day from hell in the Gulf Stream. We had 15-foot waves, and they were relentless. What was unbelievable was our celestial navigator still performed beautifully through all that weather.

We were prepared in that we knew we were going to get it. I feel that we did everything we could to get ready for it. When the squalls hit, we just dealt with it.

We had squalls of over 50 kts apparent wind and 12 to 15-foot seas in the heart of the Gulf Stream. Almost everyone was sick. We were sailing under a storm trysail and a jib because we had shredded our mainsail in the first 24 hours of the race. Part of it was Bill [tropical depression moving east]. We made it though and we are proud of that.

USNA 'Swift' skippered by Kyle Briggs has a lock on Class B honors. 'Defiance’ NA23 skippered by Jared Velaske leapt back into second at the end and ‘Integrity’ NA22 skippered by Tom Wester fell back to third in class. 1-2-3 for the navy midshipman is a clean sweep.

The smallest boats, those in Class D, were led by overall winner, ‘TI’, the Alden Mistral 36 sailed by Gregg Marston. Following in second was ‘Trust Me’ the Moody 47 skippered by Jeff Dowling. In third is ‘Roust’ sailed double handed by Ian Gumprecht and Mark Swanson. ‘Roust’  was the big overall winner in 2013.

All of the positions are preliminary.

Two boats from Class A have retired. ‘Kiva’ an Aerodyne 47 ripped her mainsail and ‘Free Range Chicken’ had a rigging failure. Both returned to the US. ‘Legacy V’ from Class B retired after one of her crew, Bill Fasnacht, died of natural causes. His crewmates could not revive him after an hour of CPR. ‘Legacy V’ has returned to Connecticut.

‘Swell’, Class C, did not start and Class D entry ‘Is Fearr Cara’ retired earlier and returned to Maine while classmate 'Shuang Hsi' is motoring in to Bermuda.

Three boats have not finished yet but are expected to finish sometime Thursday.