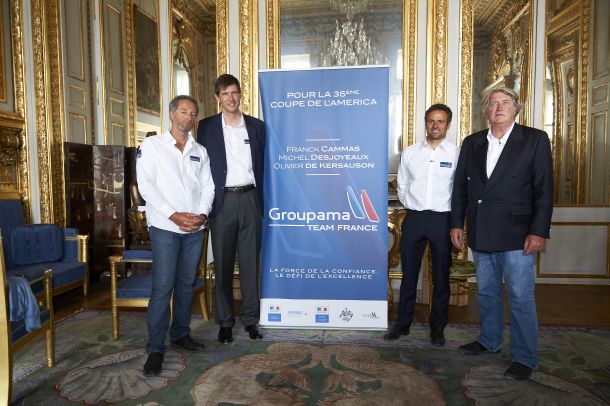 If its ssailors and designers live up their PR hype, Groupama Team France will indeed be a formidable challenger for the America's Cup. This is the media release issued after the formal launch of the French bid:

With two years until the 35th edition of the America’s Cup, Franck Cammas, Michel Desjoyeaux and Olivier de Kersauson have formalised the launch of Groupama Team France, the French bid to win the oldest sports trophy in the world.

Gathered together in the Hôtel de la Marine, the three sailors, in the presence of Thierry Martel, CEO of Groupama, title partner to the French challenge, presented the Groupama Team France project to the press and its guests, with the support of Jean-Yves Le Drian, Defence Minister and Patrick Kanner, Minister for Cities, Youth and Sports.

A land of sailors par excellence, France has won the majority of the competitions spanning the globe’s seas, and yet one prize is missing from its haul: the America’s Cup. Groupama Team France wishes to set the record straight in this regard and get the French campaigning for the oldest yachting trophy in the world.

It is with this culture of excellence that three exceptional sailors, Franck Cammas, Michel Desjoyeaux and Olivier de Kersauson, have come together to form Groupama Team France. Individually, they have won it all, in crewed and single-handed configuration and in the media; together they have everything required to carry this project off: the desire, the talent, the ingenuity and the popularity.

Patrick Kanner, Minister for Cities, Youth and Sports expresses genuine enthusiasm for this adventure, which aims to bring the French population together around a sense of national pride: “Groupama Team France is about hunting down and bringing back to France the oldest of the sporting trophies, in what is one of the most top-flight sailing competitions on the planet. However, it’s also synonymous with its contribution to the development of an entire technological network, a showcase for France’s expertise and excellence in sailing. The State will naturally work alongside this project for all to share and to support the development of various sporting and economic channels”.

Together with Groupama, his partner since 1998, Franck Cammas has built up a unique track record, notably winning the Route du Rhum, the Jules Verne Trophy and the Volvo Ocean Race. True to its commitment, ambitious in its programme and proud of the performances achieved over what amounts to nearly eighteen years, this time Groupama is committing to a project to bring about national unity.

“It’s a great day for our team. Together with Michel and Olivier, we’ve been working for the past two years to bring this project to a successful conclusion. Groupama Team France is now in full working order to attack the Cup and its competitors, who rank among the best in the world. What drives us is winning the toughest competition, going from one stage to the next and the striving for excellence. In sailing, the apex is the Cup,” admits Franck Cammas, skipper of Groupama Team France.

Today, the America’s Cup has shown itself to be the world cup for the best teams rather than the richest teams. The very latest developments in the America’s Cup format have put a whole new light on all the challengers in this competition, which will group together a single crew per country. Faster and just as spectacular, the switch from the AC72s to the AC48s translates as 25% of the original budget. This strategy initiated by the current American cup holders aims to gather together more challengers and harmonise the chances of victory.

All its technical modifications put the human at the heart of the challenge. Transcending one’s own capabilities and solidarity will be essential qualities in the success of this project. In this way, the presence of the Minister for Defence, through the French Navy, was naturally a must.

For the Minister of Defence, Jean-Yves Le Drian, the primary support for the project from the beginning, the creation of Groupama Team France is a genuine opportunity for our country:

“France is the second largest maritime region in the world and yet a French crew has never won the America’s Cup. That has to change! By joining forces, Franck, Michel and Olivier are opening up a new way forward that involves solidarity, excellence and sharing. I also spare a thought for Brittany and its famous Sailing Valley, and to the skills developed here, which we can all be proud of. It’s by approaching this as a group that we will win the Cup and the French Navy will have played a part”.

Grouping together to win, such is the determination initiated by this Groupama Team France project. France can pride itself on the fact that in terms of sailing it trains up the top French engineers, at the forefront of all the major international teams. It is with the desire to promote “Made In France” excellence that Groupama Team France wishes to be the vehicle for garnering this expertise for the beauty of the sport and the pride of France.

Double champion of the Vendée Globe as well as the first of Franck’s co-skippers aboard Groupama on a Figaro in the Transat Lorient Saint Barth 1998, Michel Desjoyeaux makes no secret of his ambition: “On a technological level sailing is a very complex sport, because we’re at the interface between the air and the water. In France, we have the knowledge as well as the culture to develop and sail foiling catamarans propelled by a wing. You just have to look at the number of French architects, engineers and sailors, who make up the overseas teams to understand that. It’s down to us, within Groupama Team France, to unite this talent”.

Beyond the world of sailing, the Groupama group wishes to combine a whole ecosystem of ambassadors around this project, carrying in its wake both partners and SMEs from our regions. “Through this human, sporting and technological commitment at the highest global level, Groupama, whose history is intertwined with that of our regions, wants to show its confidence in a winning France,” adds Thierry Martel, CEO of Groupama.