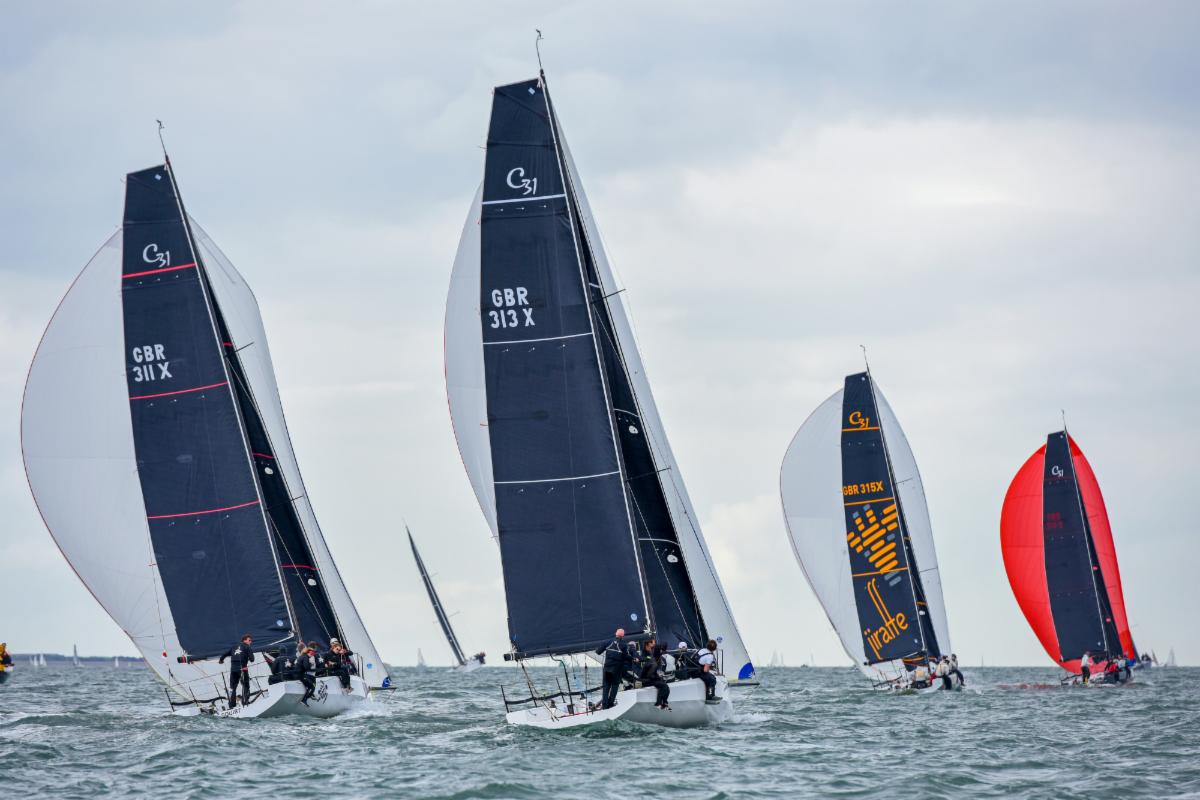 Racing got underway at the Royal Ocean Racing Club’s Vice Admiral’s Cup on Saturday with four highly competitive races for all eight classes and the gale that had blown through the Solent the previous day had passed, although there was a moody sky as the 55-strong fleet headed out to the combat zone.

A gentle breeze from the southwest, oscillated during the day providing shifty conditions. The wind speed varied under a pewter sky with glimpses of sunshine breaking through. Over 20 knots blasted in from the Western Solent for the final race of the day to create a thrilling, full-on foam up finale.

Quarter Tonner Class
Sam Laidlaw’s BLT leads the class having claimed two race wins today. Olivia Dowling’s Catch won the last two races to finish the day in second place. Julian Metherell’s Bullit is third. Stories resonate throughout the fleet, but one that really tells the tale behind the return to racing after lockdown, is from the Quarter Tonner Class.

Olivia Dowling’s Catch is a beautifully prepared yacht, but due to family commitments she has not had the time to sail her for a while. Racing in the highly competitive fleet, Olivia was especially keen to get the better of husband Niall Dowling, racing Per Elisa in the same class.

Niall commented after racing: “I made the mistake of tacking on Olivia in the first race and that obviously got her going, because it was the last time we got anywhere near her for the rest of the day! I have to say a big ‘thank you’ to the RORC Race Team that produced a really professional performance in difficult conditions.”

FAST40+ Class
Niklas Zennström’s Rán won two of today’s races to finish the day top of the leaderboard. Peter Morton’s Jean Genie is in second place, no doubt enjoying his first race victory in his new boat, beating Rán by just over a minute in Race 3.

Michael Blair and Stevie Beckett’s King 40 Cobra is second having scored all podium finishes. David Cummins’ Ker 39 Rumbleflurg is third having scored a win in Race 2 by just nine seconds after IRC time correction. Andrew McIrvine’s Ker 39 La Réponse is just a point off the podium.

J/111 Class
Tony Mack’s McFly leads the class by just one point from Cornel Riklin’s Jitterbug with both boats scoring a pair of wins each. Chris Jones and Louise Makin’s Journeymaker II had a very consistent day to finish the day in third place.

“We knew where we wanted to go on the racecourse and getting a good start in a one design fleet meant we didn’t have a bigger boat taking our lane,” explained Jitterbug’s Ritchie Hinde-Smith.

Full credit to the race team for laying excellent windward leeward courses which gave us all thrilling racing where you had to be at the top of your game. This is our fourth outing as a team this year and it all clicked together, plus our new North 1.5 headsail was really fast straight out of the bag.”

J/109 Class
David Richards’ Jumping Jellyfish leads the J/109s after four races, finishing the day in style by winning the final two races. Christopher Burleigh’s Jybe Talkin’ scored second in the final race to move up to second overall. Mike Yates’ Jago was scoring well but had to retire before the start of the final race with a minor crew injury. Jago is third on countback from Mojo Risin’ skippered by Rob Cotterill.

HP30 Class
Glyn Locke’s Toucan opened their defence of their Vice Admiral’s Cup title with three straight bullets. In the final race, a real ripper, with the HP30s planing at terrific speed. Jerry Hill and Richard Faulkner’s Farr 280 Moral Compass took the win to finish the day in second place.

Three boats are within a point of each other for third. Jamie Rankin’s Farr 280 Pandemonium scored a third in the final race to place just a point ahead in the series from Lucian Stone’s Fareast 28 Vendetta and Jonathan Powell’s Farr 280 Peggy.

SB20 Class
The SB20 Class was an awesome sight today, especially in the final race, scorching downwind in a ball of spray. Stephen Procter’s Xcellent scored three race wins, but a seventh place in Race 3 means that Xcellent only leads the class on countback from Tom Neilson’s team. Richard McAdam’s Breaking Bod is third.

After racing, a dinner was held at the Royal Ocean Racing Club’s Cowes Clubhouse with social distanced dining for over 70 competitors, members and guests. The RORC Vice Admiral’s Cup will conclude tomorrow Sunday 23rd May.