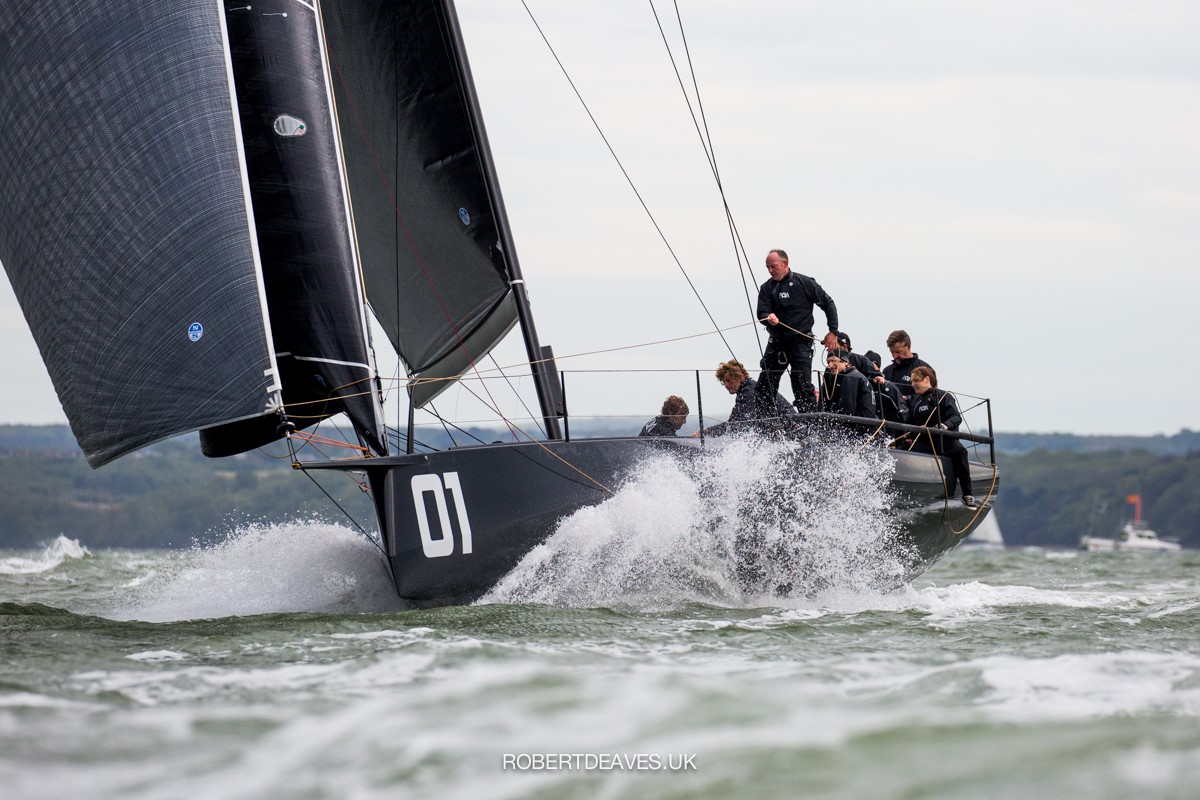 After a day of very tight racing in Cowes, Rán is the early leader in the Fast40+ Class at the Vice Admiral’s Cup, Round 1 of the class’s 2021 Race Circuit, while Khumbhu and Jean Genie also won races on a day when the weather threw pretty much everything at the fleet except snow.

The forecast was variable and with the early 10-12 knot patchy wind dropping away to 5-6 knots under rainclouds, the day ended with a fresh breeze topping out at just over 20 knots for a blast around the Solent.

Khumbhu led all the way in Race 1 with most of the fleet favouring the left side to take advantage of the flood tide. She took the win by nearly two minutes over Rán and Jean Genie.

In Race 2, Khumbhu struck out to the right but Jean Genie led at top. Khumbhu went left downwind to lead round the gate but it was all very all very close. The top three rounded the final upwind mark in a pack with Khumbhu just maintaining her lead.

However, on the final downwind with Jean Genie leading down the middle, she suffered the first of many breakages to allow Rán, who had gone further to the left to come in hot to the gate and gybe in front to take the win. Khumbhu took third.

The wind dropped shortly after the start of Race 3 for a long tricky race with lots of rain clouds passing over. Khumbhu again led at the top, but by the gate the top four were locked together. Rán just rounded ahead, but Jean Genie finally emerged ahead for a 62 second win from Rán and Khumbhu.

Jean Genie is the original Zephyr, one of the original GP42s, now owned by Peter Morton. “We did some modifications to the deck, put a new rudder in and today was our first proper day’s sailing, and it showed,” he said.

In the first race we were all fingers and thumbs. In the second one we were leading and broke a jib turning block and ended up nearly overlapped at the finish. That was a race we should have tucked away.

“The third race we won and the fourth we were doing reasonably well, just behind Rán and first we couldn’t get the code zero down and broke another jib turning block and then 100 metres from the finish when we were comfortably second, the mainsail inhaul broke.

“The boat is good. It’s ten-years-old, and slippery downwind; good in the light but lacking power when the breeze kicks in. They are great fun boats to sail. If it’s light to moderate, we actually feel quite strong. Below 10 knots the boat feels really lively.”

On today, “It was good racing. Some of the races were very close. The boats are fantastic boats. Probably one of the best boats I have ever sailed, but frustrating for me because of all the gear failure, but that is inexcusable in my view.

“I think we should have been on a par with Rán tonight, but we are three points behind. We certainly gave them one race on a plate, and you can’t do that as they are a really good sailing team. The stuff that broke was all new, but just under spec, but they are quite powerful boats, and they really load up. But you can’t afford to make any mistakes.”

Khumbhu, owned by Class Chairman, Guy Gillon, has received a number of modifications for this year. After just two days training, today was the first time the crew had sailed the boat in anger following the changes.

“We have new ECsix carbon rigging, a new transom and a new main sail. We upgraded the aft push pit up with new carbon stanchions to get more people at the back of the bus. We also have a new mainsail with helix technology from North, which we used for the first time today.”

Gillon was pretty pleased with the performance, winning five out of six upwinds in the first three races.

“We are dead chuffed with the boat’s performance. It’s really great to have three boats punching together on the windward leeward races. In all the first three aces we could have been first, second or third. It was that close.

“We had a few issues in the round-the-cans race though. We opted for the light wind sails, so we were full on. But wanted to preserve the sails, so we switched jibs without a foresail. That cost us quite a bit. Then we had a couple of rigging issues so we couldn’t get the Code Zero deployed.”

He said they are also bedding in new team. “We have Paul Campbell-James doing tactics, Pete Greenhalgh on trimming and Luke Cross as boat captain. Christian Hamilton does the driving and I just get in the way.”