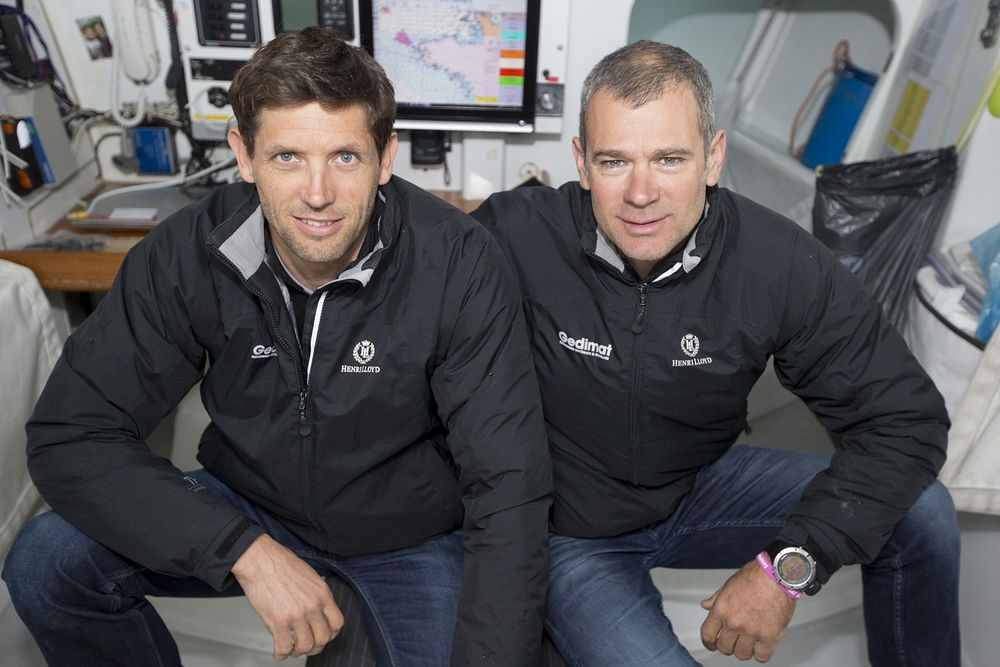 Close finishes to marathon ocean yachts races are becoming standard fare these days and the Transat AG2R La Mondiale proved it was no exception with an incredibly dramatic finish at the Caribbean island of St Barts today.

After completing a 3,800 nautical mile course from Concarneau in Brittany, but having travelled 4,932 miles through the water, the jubilant French pairing of Thierry Chabagny and Erwan Tabarly on board the Figaro Beneteau II one-design, Gedimat, took the honours.

After 22 days, one hour and six minutes at sea, and sailing at an average speed of 9.32 knots over the total distance, they finished just four minutes and four seconds ahead of second-placed Nicolas Lunven and Gildas Mahe on Generali.

“My feeling? A sense of happiness,” said Chabagny after swigging on a large bottle of ice-cold champagne on the dockside. Tabarly summed up his feelings equally succinctly. “Happy, happy, happy,” he said.

For the French pair this was an especially sweet victory after they were forced to retire from the last race in 2014 when their boat dismasted. “We were frustrated not to get to St Barts then,” said Chabagny. “So this is like two pleasures at once – it’s great,” he added.

Behind them the third and fourth placed boats, AGIR Recouvrement co-skippered by Adrien Hardy and Vincent Biarnes, and Bretagne-CMB Performance, sailed by Sebastien Simon and Xavier Macaire, got in just 30 and 40 minutes respectively after Gedimat. In fifth placed Cercle Vert, crewed by Gildas Morven and Alexis Loison was only three minutes further back.

The rush of boats across the line off the harbour at Gustavia, the St Barts capital, was the climax of a fascinating race in which the top-five boats in a 15-boat fleet traded places all the way across the Atlantic from the Cape Verde Islands.

Gedimat held the lead in the overall standings for 20% of the time, as the battle at the head of the fleet raged over 530 hours of non-stop racing. But crucially its experienced crew, who between them have raced in 15 AG2R transatlantics and started among the favourites for victory, managed to hold onto the initiative in the final, nail-biting stages.

But right up until the last few hours of the race, as the breeze died away in the early hours of the Caribbean morning, it was still impossible to pick a winner. Gedimat, Generali and AGIR Recouvrement were all in the mix as their exhausted crews worked for every tenth of a knot of boatspeed as their 33-footers stole along in the darkness between Barbuda and St Barts.

After Cercle Vert the next boat to finish was expected to be the sole British entry in the race – Artemis, skippered by Robin Elsey and Sam Matson. The two Artemis Offshore Academy alumni, who fell out of the leading group in the early stages, still had 25 miles to sail when Chabagny and Tabarly crossed the line.

When the 15 boats in the AG2R set sail from Concarneau in Brittany on April 3rd there were predictions that the race record of 19 days could be under threat. But in the event the crews headed further south than ever before, making the course considerably longer.

After racing across the Bay of Biscay, past Cape Finisterre and then down the Spanish and Portuguese coasts, the search for the best wind conditions pushed the sailors further south along the coastline of the Western Sahara. The fleet then became the first in AG2R history to sail through the Cape Verde Islands as the crews hunted for the strongest pressure in the northeast trades.