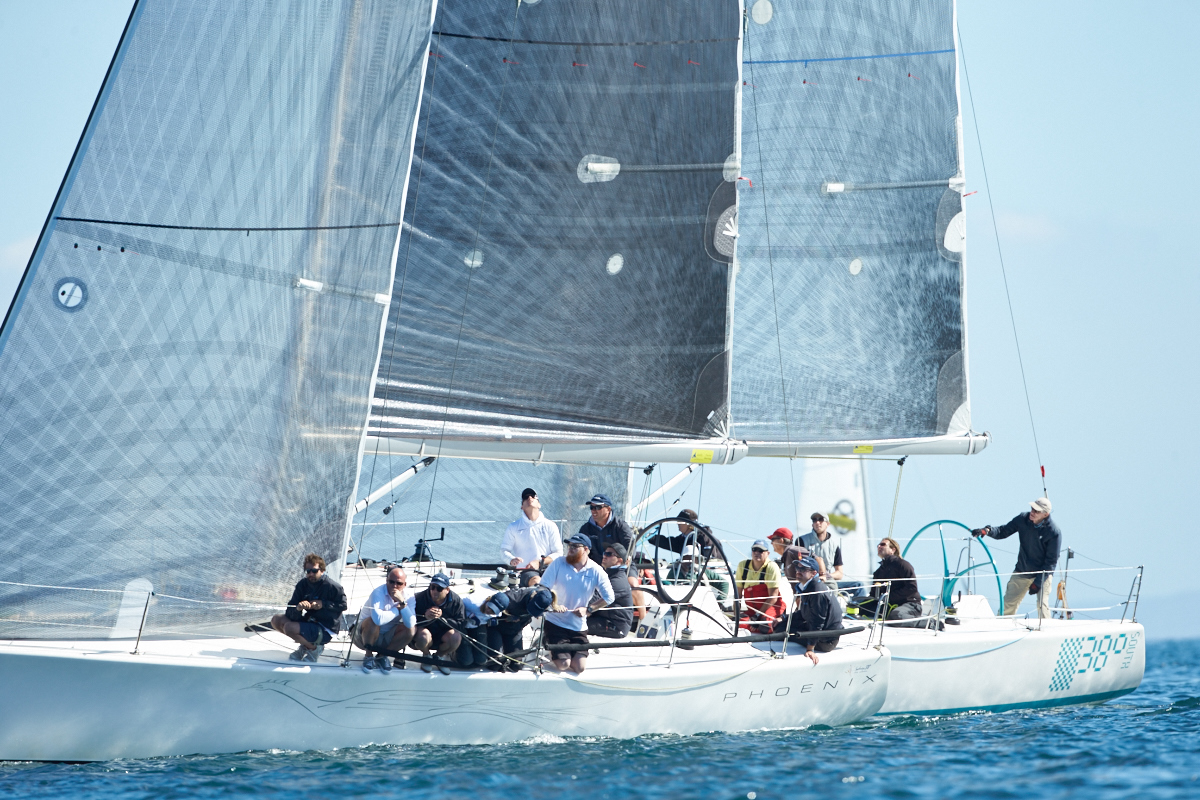 The AMS Sydney 38 Victorian State Titles were held over the weekend, April 23-24, at Sandringham Yacht Club on Port Phillip’s eastern shore where Andrew Mollison and his Sierra Chainsaw crew scored their first grade one win.

Going into the final race on Sunday afternoon the three top boats, Sierra, Kirwan Robb’s Ikon38 and two-time national champion Phoenix (Jen & Brenton Carnell) sat level on points. “Our tactician Leith Hore was really focused; he knew exactly what he wanted us to do,” Mollison recalled. “After the start we tacked in front of Ikon and Phoenix then maintained our lead. We had Phoenix on our tail within a boat length for most of the race.

“It’s the first grade one regatta we’ve won on Chainsaw; it was very important for us to put in a good result.”

Sierra Chainsaw has been racing with the Sydney 38 one design fleet for eight years, five years with the current crew. Part of Sunday’s victory was Andrew’s 77 year-old dad, Mel Mollison, a key team member who works the pit.

“We had a lot of congratulations from others in the class. The guys from Ikon38 and Phoenix said if it wasn’t to be their regatta they were happy it was ours,” Mollison said proudly.

Fleet racing hinges on being first to the front then holding out the challengers. Brenton Carnell said, “Leith [on Sierra] watched our every move. They’d gybe accidentally because our crew moved suddenly. We threw everything we had at them in the last race, the series hinged on the final result and Sierra got in front by a metre and held us out. It was a good result; I’m very happy for them. It’s great for the fleet to be competing at this level.”

Saturday’s race two results went to a video review, Phoenix declared the winner by one second. Then in following race three the same crew was rubbed out by a protest outcome, along with Ikon38. On their disqualification Carnell admitted, “We were disappointed; you take the result on the chin and rebuild for next time.”

Sailing for the host club SYC, Sierra Chainsaw took out both the open and Corinthian state championship with Phoenix (Royal Geelong Yacht Club) second and Ikon38 (Hobsons Bay Yacht Club) third, a mere point separating the top three placegetters. “It was one design racing at its best,” said Australian class president and owner of Audacious, Greg Clinnick, adding, “Sierra Chainsaw are long time stalwarts of the class and this is their greatest result.”

Four races were run on Saturday for the fleet of seven in a building southerly breeze that started out at 6-8 knots and finished up in the 14-16 knot range.

On Saturday night the class Association hosted a crew dinner for all boats at Sandringham Yacht Club’s restaurant. More than 80 guests enjoyed fine food, wine and camaraderie as the outcomes of two protests were debated over a glass of red. Class sponsor North Sails handed out the prizes for the summer sprint series run earlier in the year, won by Ikon38.

Commenting on the class’ social side Carnell said, “We love the fleet and the people, it’s a family. Everyone is close-knit and regardless of what happens on the track you can enjoy a beer together afterwards.”

Day two, Sunday April 24, began with a 2.5 hour postponement due to lack of wind. Eventually two races were run in shifty 5-8 knots before the 2.30pm cut off and trophy presentation.

The next class event is the pre-season regatta on the other side of Port Phillip, at Geelong, in September prior to the summer season starting.