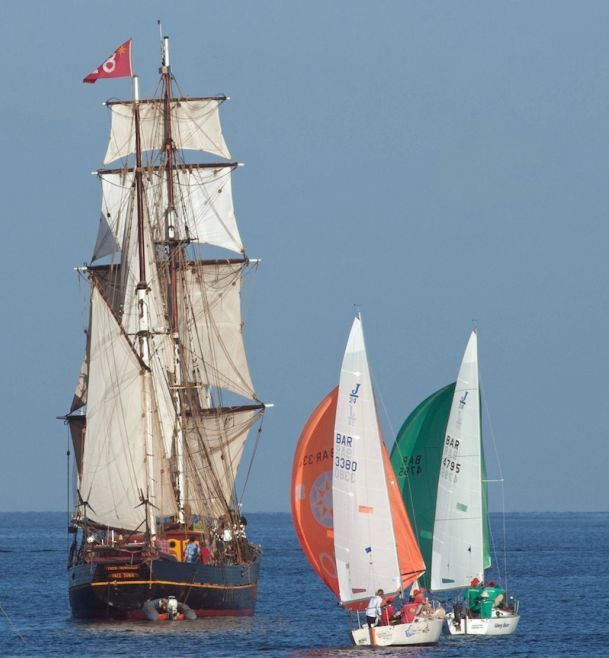 Bridgetown, Barbados (21 January, 2015): Despite generally light airs with winds reaching no more that 15kts, three teams have won their skipper’s weight in rum for breaking records in the 79th Mount Gay Rum Round Barbados Race.

The Double Handed Monohull record for the 60-nautical mile course went to Dave Staples on Hallucine (Pogo) with a time of 07:29:51. Staples, who chartered the boat especially for the event, has now beaten his own previous record.

Conviction the local TP52 sailed by Paul Johnson, Clint Brooks and team representing the Barbados Offshore Sailing Syndicate (BOSS) took the 60ft and Under Monohull record with a time of 06:07:06, while the well-sailed One Design J/24 record went to Jason Tindale and his young local team on College Funds.

Team College Funds skippered by Laser sailor Jason Tindale were noted for their impressive performance. They managed to break through to the lead the fleet at North Point by sailing closer to the shore, and finished third over the line. They also broke the J/24 record with a time of 9hrs, 06mins, 38secs.

Tindale commenting on the team’s performance said: “We had a fantastic day and are delighted to have done so well. It didn’t look good at the start in just 4kts of breeze. It took an hour to sail two-and-a-half nautical miles. Thankfully the breeze filled up to 14kts and the crew worked well to get everything together.

“A good tactical manoeuvre at North point by sailing further inshore gave us an advantage over a couple of boats who sailed out further. It is always a bit rough the Point and today was no exception. It was lumpy and very uncomfortable in the J/24 but we made it. We had a bit of tough time steering down the top part of the east coast with the kite up for four hours but once we were round East Point the situation improved and it was a fun ride home.”

Palpatine, the British Stormforce Coaching charter yacht (Stimson 42) skippered by Doug Innes, and team, took line honours completing the 60-nautical mile course in 07hrs, 43mins, 57secs. They sailed well in the light airs at the start and managed to retain their position at the top end of the of the fleet after their 0830 start.

They did however, struggle to make any impact on the two, well sailed J/24s – College Funds and Glory Daze – who led the fleet for almost two thirds of the race. Innes and team eventually managed jiggle through into the leading position just before East Point and led the fleet for the remaining 20 miles to the finish line.

Innis chatting after the finish, said: “We are thrilled to have crossed the finish line first. It is a great achievement for me, and the British team who are all here on individual charters. It was a great race, despite the light winds at the start but we had good sail up the west coast and flew a spinnaker, close, for most of it.”

Although the lack of record-breaking opportunities on the in 60-nautical mile Mount Gay Rum Round Barbados course proved disappointing for many in the 35-strong fleet, the race was a huge success, with most competitors regarding it as one of the best to date.

Peter Lewis on his J/105 Whistler who won the 35ft and Under, and the CSA divisions said he couldn’t have asked for a better day. “It was an excellent race and despite the generally light airs it was a beautiful day for sailing and one of the best on record. We were a bit concerned the big boats would swamp us towards the end, but thankfully we were far enough ahead.”

Steve McLaren’s 55m Elena of London (A Class Racing Schooner), the recently-launched and locally built Ruth (30.5m schooner), and Tres Hombres (33m Brigantine) looked stunning as they headed glided gracefully up the west coast in the light airs. Ruth and Tres Hombres struggled to round North Point however, and retired, while Elena, with her huge sail aloft, blasted all the way down the east coast. Although she was unable to break the record she set in 2011 she did managed to achieve wins in both the Unlimited and Classic divisions.

Andy Budgen and team on the British VO70 Monster Project who last year blasted round the island and set a new outright monohull round Barbados record with a time of4 hours 42 minutes 28 seconds, were unable to repeat/better their performance this year. They came in just under an hour behind the record but were still able to claim the overall win of the 80ft and Under division.

Because the event traditionally takes place on a public holiday to celebrate Errol Barrow Day, and is the headline event at the annual Mount Gay Round Barbados Race Series, it was no surprise that this important sporting event attracted crowds of spectators.

Locals and holidaymakers, not only headed to the south of the island to the beach area at Barbados Cruising Club to relax in the sun and watch the start and finish, but also followed the race by car, stopping off at key vantage points round the coast, including the North Point, the most challenging part of the race.

The Mount Gay Round Barbados Race Series gala prizegiving party and dinner to mark the end of the 2015 event, takes place tomorrow evening at the Beach House along the west coast of the island.