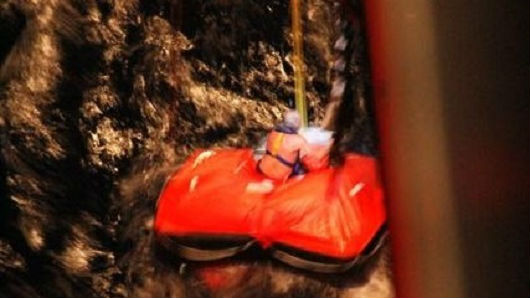 Two New Zealand sailors and their Mexican skipper have been rescued from a liferaft 280km south of the tiny Pacific Ocean coral island Niue after their yacht caught fire just after midnight last night.

The 15m United States registered yacht SV Sunny Deck was travelling from Rarotonga to Tonga when a fire in the engine compartment engulfed the vessel.

The 36-year-old skipper was on watch, and the two other sailors – both from Hamilton, aged 67 and 70 – were asleep at the time.  The crew had no time to dress or grab any equipment before abandoning the vessel to a liferaft but the skipper managed to reach the EPIRB – fire had already melted the lanyard attaching it to the vessel.

RCCNZ identified ships nearby and the Liberian-flagged container ship Cap Capricorn was the closest at just over 38km away and was requested to divert and provide assistance.

“When they arrived on scene they saw the glow from the burning yacht and blasted their whistle to attract the attention of any survivors. After around 30 minutes of searching they saw a distress flare fired in response. The liferaft was located and the ship maneuvered alongside. The three sailors were able to board the ship via the pilot ladder.  First aid was provided on board but we understand there are no serious injuries.”

Wilson said conditions in the area were not easy, with waves around 3.5m high and winds of 45km/h. The yacht’s crew were safely on board the Cap Capricorn by around 5.15am.

“It was an excellent piece of seamanship to bring a 228m ship alongside a liferaft in these condition. We’d like to express our appreciation to the master and the crew of the MV Cap Capricorn for their efforts,” he said.

“The crew of the yacht were also well prepared – they had a registered EPIRB, which enabled them to be identified quickly, their liferaft was in good condition, and they had a distress flare to respond when the ship arrived. In the circumstances it was an excellent result.”

MV Cap Capricorn is en route to Auckland and is due to arrive on June 27.