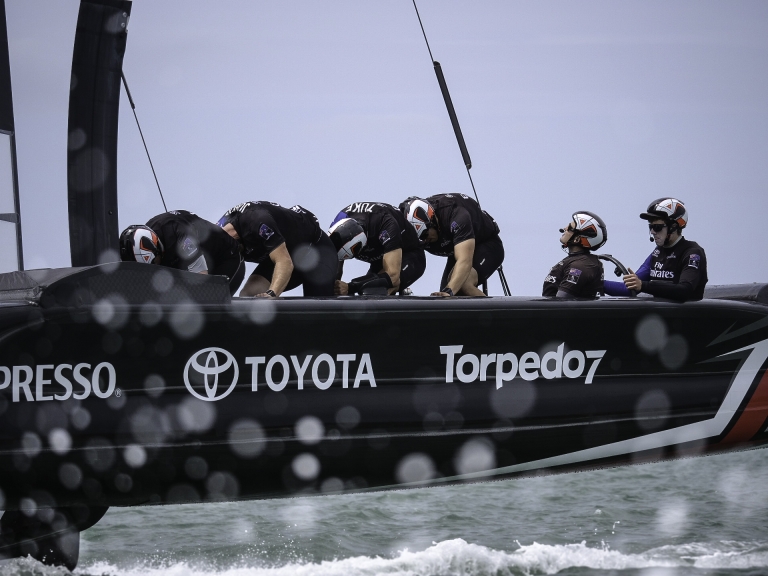 There are just three contestable crew positions left on the Team New Zealand race boat for this year's America's Cup.

The Kiwi syndicate yesterdayofficially launched its slick new 50-ft catamaran for the Bermuda event, which gets underway in May. Much of the focus at the launch was on Emirates Team New Zealand's radical new pedal-powered hydraulic system.

The boat, christened New Zealand, features cycles in place of the traditional pedestal, in which the grinders turn handles.

Team NZ have been working on the innovative system for the past three years, but kept it carefully under wraps to prevent the opposition from replicating the development. But behind closed doors the crew have undergone a rapid transformation, with much of its training programme targeted towards cycling.

With the emphasis of the campaign now moving from the confines of the boat shed to the open water on the Hauraki Gulf, the next month will be about trying to find the right balance between sailing smarts and brawn in their six-strong crew.

Team NZ sailing director and skipper Glenn Ashby said the team are still working to define some of the crew roles on the boat.

“Some things are locked down, but other things aren't. We've got to stay a little fluid with how we learn to sail the boat in the new configuration, but that's something we're working very hard on over the next few weeks,” he said.

Ashby will be the team's wing trimmer, a role he also performed for Team NZ at the last America's Cup in 2013. Peter Burling will be at the helm of the boat, while Blair Tuke, who paired up with Burling in the 49er class to win gold at the Rio Olympics, will pilot some of the control systems as well as power them.

Read the remainder of the story at The Herald.