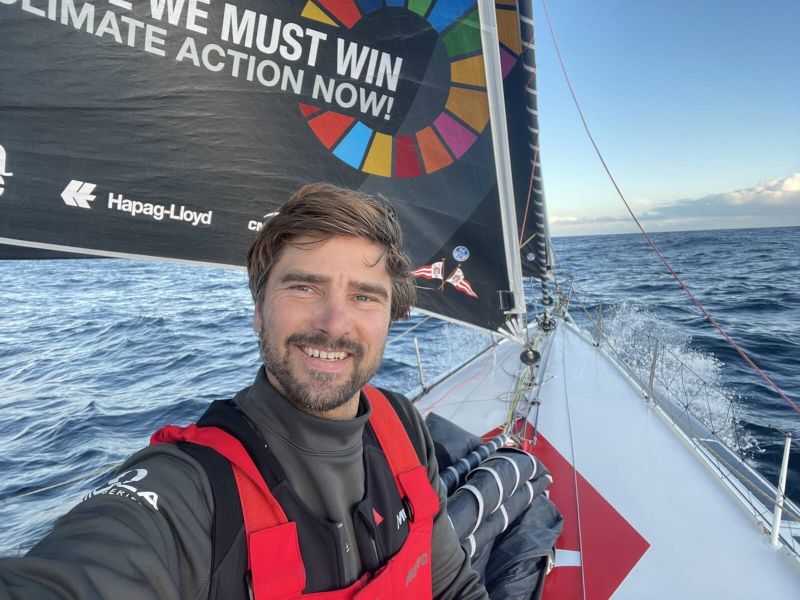 Photo sent from aboard the boat Seaexplorer - YC de Monaco during the Vendee Globe sailing race on December 31, 2020. (Photo by skipper Boris Herrmann)

After 24,300 nautical miles and more than 80 days of racing around the world, victory or a place on the podium on this ninth edition of the Vendée Globe might go down to the final layline, picking and sailing the perfect compass course from more than 100 miles out to the finish line at Les Sables d’Olonne’s famous Nouche Sud buoy.

At 48 hours until the first finisher is expected on the line Wednesday afternoon, computer modelling from the current weather predictions suggest three solo skippers could finish within four hours of each other.

And with the wind on the Bay of Biscay due to strengthen for those chasing the leaders on Wednesday into Thursday morning, it is still possible that fifth placed Yannick Bestaven – 253 miles behind leader Charlie Dalin this afternoon – can arrive and steal a podium position, and even victory, because of his 10hrs and 15 minutes of time compensation given for his role in helping search for Kevin Escoffier after the French skipper had to abandon his boat.

Dalin, 37, can do nothing more than sail his best possible race to the finish line. His IMOCA Apivia is compromised on starboard gybe due to a failed foil bearing but since moving on to port gybe and his favoured starboard foil, the race’s most consistent leader has been fastest, this afternoon making 22 kts, five knots faster than second placed Louis Burton and one knot faster than third placed Boris Herrmann. The seemingly unflappable German skipper, who looks set to follow his British friend and confidant Alex Thomson on to the Vendée Globe podium, is closing out a beautifully executed first attempt at the Vendée Globe.

But Herrmann, who today admitted his emotions swing between enjoyment and stress, highlighted from on board SeaExplorer – Yacht Club de Monaco just how close this finish can be.

“It will be such an amazing finish. I expect it will be down to the last degree of wind angle on Wednesday afternoon and it is so hard to predict, even with the ensemble model (which averages the likelihood of each model). I will play it a bit by ear.”

Since Sunday, the leaders have opted for two separate routes. “There are two main options, North or East,” sums up Louis Burton (Bureau Vallée 2), who conceded first place to Dalin yesterday.

Burton, Herrmann and Dalin were on the eastern option at the latitude of Portugal and over 200 miles west of the trio at the northern group Ruyant (LinkedOut, 4th at 3pm), Yannick Bestaven (Maître Coq IV, 5th) and Damien Seguin (Groupe APICIL, 6th),

Between these two options, the choices are almost infinite. More than two hundred routes can still be run.

“The Dalin-Burton-Herrmann trio from the south east will have to deal with a small area of ​​light wind in the Bay of Biscay. This will allow the group from the north to come back with more sustained wind,” warned meteo ace Yoann Richomme on the Vendée Live.

Herrmann spoke of his ever increasing boat speed, now very much into the sweet spot perfect conditions for his VPLP Verdier design onto which he added new, bigger foils last spring,

“We are liking the flatter water for sure. Strategy-wise we are on another page. This race will be to the finish line and maybe a few seconds after that until we make the calculations as to who actually will compose the podium.”

Asked how he is dealing with the stress of being in the white heat of the closest ever Vendée Globe finish, Herrmann said, “I am in a really black and white scheme, really between stressing myself and just enjoying it. All my friends and my wife are telling me ‘come on don’t let the pressure get to you, this is all good. It has been an incredible race, just do your best and enjoy it.' And then we will see.

“There is not so much more I can do. I could try tactically to shadow one or the other competitors but then if you do the math it does not make sense. On my calculations today I have Yannick Bestaven winning on my routing scheme here. He is way too far north now to cover him. If I cover him he has four hours more than me. I don’t think there is an option for match racing here. As much fun as it would be it is really like now finding your own lane, using the shifts when they come and stuff like that.”

Of the big picture options he concluded, “One route goes past Finisterre and the other goes way north and then east, that I thought yesterday would be the one and only option for me. Since then I am playing a bit more in between, I think the last 18 to 20 hours will be really important in terms of the actual wind direction.

A longer line, just in case…

To account for the complicated conditions for the close finishes into Les Sables in the days to come, the race director decided to lengthen the finish line, in accordance with article 9.1 of the sailing instructions. The line, which was supposed to be 0.3 miles (500 meters), will now be 1.9 miles (3.1 km) extended south. This will give the fleet enough runway to slow down after this remarkable sprint finish.